Billions of dollars flow in and out of The Port of Los Angeles on a daily basis. Because of this, the beautiful port has been...

Billions of dollars flow in and out of The Port of Los Angeles on a daily basis. Because of this, the beautiful port has been polluted with fuel emissions and other contaminants, forcing the port to institute measures to reduce its environmental impact. These initiatives are responsible for incredible technological developments that might have taken many more years to develop without this impetus.

On the southern end of the city of Los Angeles is the San Pedro Bay. Tucked in here are two ports: The Port of Long Beach and its big brother, The Port of Los Angeles. Originally, the latter was developed as a commerce junction for the cities of Salt Lake City and Yuma. In 1871, it was reported that the port had handled approximately 50 thousand tons of goods. 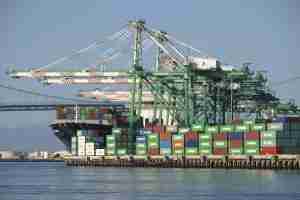 Fourteen years later, the port, now run by the sons of the original owner, was handling 500 thousand tons. The sons dreamed of expansion—and they got it. By the time of World War II, the port employed 90,000 people and was used primarily to build ships for the war. Fast forwarding to current day, the port can handle 500 thousand containers of goods every month, which equates to $1.2 billion of cargo each day. It also employs 896 thousand people in the area and 3.6 million worldwide.

Growth at a Cost to the Locals

Perhaps to the outsider it’s easy to overlook any negatives of the port due to its massive economic impact. After all, without the port we would have trouble importing all the wonderful products that we outsource to China and other eastern Asian countries, which together make up around $215 billion of business. China is responsible for 63 percent of that figure.
Interestingly enough, we are sending our unwanted goods—including scrap metal—back to them, and in the process creating the opportunity for them to make counterfeit parts they can sell back to us. While we flourish economically and in quality of life from the products we receive, there is always a cost of doing business. And in the case of The Port of Los Angeles, it’s a massive environmental cost that impacts all the citizens in the area. 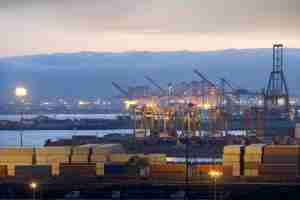 Why Los Angeles is Known for its Smog

While it’s thankfully not as bad as some of the most polluted cities in the world, Los Angeles definitely tops the lists for most polluted cities in the United States. In fact, California takes up most spots on the list. Ships sit idly with their engines on, waiting for their turn to load and unload their cargo so they can deliver the goods again; trucks and trains do the same thing. But those aren’t the only sources of pollution: the port isn’t connected to the city’s power grid so they burn bunker fuels to power their operations.
A silver lining exists, thankfully. In 2002, the Board of Harbor Commissioners implemented the Clean Air Action Program (CAAP), aimed at reducing emissions from port operations. Through this and other initiatives and grants, the port has undertaken long-term steps to reduce its carbon footprint and restore the area to its former condition.

The Technologies Leading the Way

Already the port has made strides towards its goals. They have built a power grid called the Alternative Maritime Power (AMP) program which helps to reduce emissions by allowing ships to plug in while docked instead of sitting idling. A hybrid tug boat works long hours hauling vessels.
Robotic cranes have been implemented to help reduce the amount of time spent operating them, and thus reducing the total fuel usage. These cranes are hybrid controlled, allowing manual control in the air but once near the stacking area it enters a mode that can stack and sort containers in a highly efficient way that humans would not be able to. This is part of the Technology Advancement Program, and its advancements provide better control in a smaller space.

A system has been created to capture 90 percent of the emissions from ships called the Maritime Emissions Treatment System (METS). A “cap” is put over the exhaust ports of the ship to capture the emissions. This provides an alternative to using the AMP system.

Of course, not all of their efforts are being done with new technology, but rather with policy or just plain common sense. For instance, the Clean Truck Program ensures that all trucks in the area follow strict emissions standards. Additional rail lines are being constructed which will in the end help eliminate millions of trips by trucks, which are far less fuel efficient.

Clearly, they’re doing something right. Shanghai Port has followed suit and built their own version of the AMP. Emissions levels have already dropped by over 50 percent across the board. No one has previously created a system to capture ship emissions, and it could potentially revolutionize the industry and be implemented around the globe.
But they’re not the only ones working on becoming more sustainable. Ports around the world have their own initiatives. The benefits of this are shared technologies among the different ports and overall improved efficiencies across the supply chain.

Officials are Pleased with Progress – Are the efforts paying off?

“We have found an efficient way to get containers to their destination that is beginning to pay off. We’re acting on our pledge to our customers to harmonise the supply chain and make it work better. Permanently.” said port Executive Director Gene Seroka.

The CEO of TTSI says that the truck technology being implemented is helping prevent “multiple inefficient moves so cargo flows faster and more reliably.” And the CEO of CAEM feels that the METS really nailed it and that it “could have a profound impact on the entire shipping industry and our global environment.” 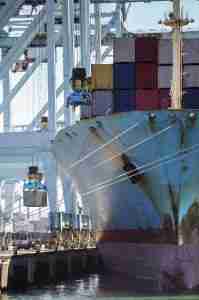 daily is still high. One project being planned is called eHighway, which would provide a completely emission-free pathway for vehicles to travel on, powering everything by overhead electric grids.
The port’s website lists 27 different projects that need to be reviewed by CEQA and NEPA. AMP has implemented regulations to power vessels for 80 percent of their visits by 2020. The port hopes to have 200 zero-emissions vehicles by this time as well.

A water conservation program to protect Los Angeles from drought is ongoing. The port is collaborating with the city on this and continues to engage in clean water initiatives. A program was developed to award ship operators who go above and beyond the requirements for clean emissions, so perhaps the port will beat the regulations that have been imposed.

Overall, the progress has been incredible and perhaps LA will be rid of smog in the future. And don’t think that you have to just sit idly by and watch their progress. Currently anyone is allowed to send in proposals in an RFI format for reducing carbon emissions. Check out the CAAP website for more information. Perhaps your submission could be the next revolutionary idea.