Don’t like the noise and the size of those huge wind turbines? Start celebrating (quietly), because wind trees may be the answer.

Don’t like the noise and the size of those huge wind turbines? Start celebrating (quietly), because wind trees may be the answer.

While wind energy is not new, some of the methods used today differ greatly from those utilized over 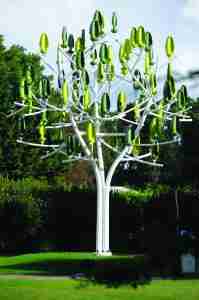 the last couple of decades. Supporters claim these newer techniques for harnessing wind energy will eliminate many prior issues and provide a more efficient means of sourcing energy from the wind. But one design in particular caught our eye—and the wind.

Wind turbines on wind farms are large, noisy, perceived as ugly by many, and are credited with the death of thousands of birds. But what if you could have a turbine that collected wind energy, and looked like part of the natural landscape?

French designer Jérôme Michaud-Larivière of the company New Wind has a viable solution—tree shaped wind turbines. It solves many of the problems of older technology: it’s only 26ft feet high, silent, and although extensive testing has not yet been completed, would be more friendly to the animal kingdom.

26 feet tall and fitted with 63 plastic and resin ‘leaves’

Can reportedly generate electricity on twice the number of days as a conventional wind turbine because it is able to generate power on winds of just 4.5mph, regardless of wind direction

Designed for cities, and to harness the small air currents that flow around buildings, alley ways and streets; could also be installed in urban centers, schools, and yards

“Urban wind is not very strong, but it is very turbulent,” says “Arbre à Vent” engineer Julia Revuz. “These turbines need less wind to get started and produce around 3kW of energy, which could heat a small home, fuel lights or charge an electric car.” 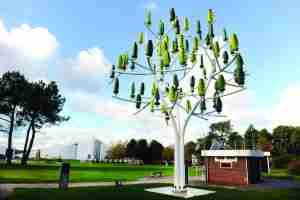 Could provide enough power for 15 street lamps, 83 per cent of the electrical consumption of a typical family household, or one electrical car for 10,168 miles (1,360km) over the course of a year

Operates in near silence, so sound pollution is not an issue

Retail price is $33,670; the tree could be profitable after a year of wind speeds averaging around 7.8 miles per hour

Future plans for advancing the wind tree include ‘leaves’ with natural fibers, ‘roots’ that can generate thermal energy, and ‘bark’ covered with photosensitive cells.