Sending electrical signals from the stomach to the brain can trick the brain into feeling full Engineers at the University of Wisconsin-Madison have developed a... 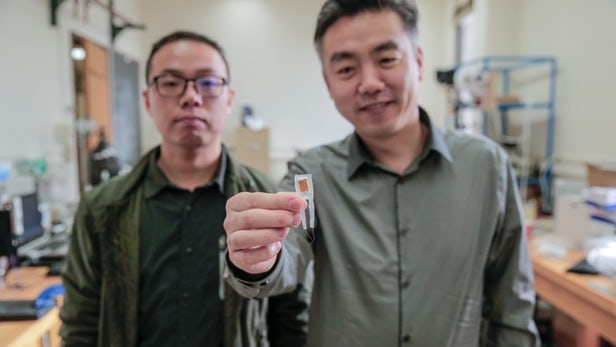 Engineers at the University of Wisconsin-Madison have developed a small implant that could prove to be a major breakthrough in the battle against obesity. Using the recent strategy of vagus nerve stimulation (VNS), the implant has led to a 40 percent body weight loss in rats.

Xudong Wang, one of the developers, is no stranger to implantable medical devices, having created “implantable nanogenerators that harvest energy from people’s beating hearts and breathing, a motion-powered bandage for wound healing, and other such devices.”

The VNS device developed at the University of Wisconsin-Madison is powered by the motions of the stomach when one is eating — without needing a battery, and only activating when digestion starts.  Electric pulses that correlate with the stomach’s movements are then sent from the stomach to the vagus nerve, making the brain think the stomach is full after only a little bit of food.

Measuring less than one centimeter across, implanting the device requires minimally invasive surgery. The devices are safe to use in the body and the results of the procedure can be reversed, unlike with bariatric procedures. When the devices were removed from the rats after a 12-week trial, the rats returned to their normal eating habits and regained the weight.

In 2016, the University of Wisconsin developed another VNS device that also sent electrical signals to the brain in an effort to reduce epileptic seizures. Testing showed that nearly half of patients reduced their seizures by 50 percent, while one-third had a reduction of less than half and another on-third had no change in their seizures.

As for the VNS device meant to combat obesity, the research team is moving forward with testing on larger mammals with the ultimate goal of human trials. In a country where nearly 40 percent of adults are obese, one can only hope the research continues to be successful.