When future history books of robotics are written, Virginia may play an important chapter.

Effective July 1, 2017, the state of Virginia will allow delivery robots to operate on sidewalks and crosswalks—rest assured, under 10 miles an hour—on their way to a doorstop near you.

Starship will be a crucial pioneer thanks to its national robot delivery tests in January. As more consumers get used to the idea of one-hour delivery through Amazon Prime Now, are we one step closer to automated mailmen?

Local Level Control
Virginian municipalities can each regulate robots’ operations on a local level or even nix the robot traffic completely.

“There wasn’t push back [from legislators]. It was more like intrigue and curiosity about the technology, what the application would be, how it would benefit the citizens,” Rep. Villanueva shared.

Amazon and Grubhub were among companies that supported the Virginia lawmakers in passing the robotic delivery law, said Rep. Villanueva.

This law is the gateway for more ground delivery robotics companies to flourish throughout Virginia.

Marble and Dispatch are also working to bring robots for autonomous delivery to city sidewalks, while Starship is reported to be testing its robot delivery with Postmates in Washington, D.C., and DoorDash in Redwood City, Calif.

The Fine Print
Speed isn’t the only limitation stipulated in the law. Legal robot delivery entails weighing under 50 pounds, too. They can only cross the street—there’s a bad joke there somewhere—within crosswalks.

Robots aren’t required to stay within the line of sight of the person in control, however someone must monitor the robot—remotely is fine—in order to correct any errors or mishaps. 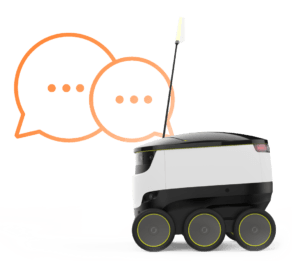 Are More States to Come?
If you can believe your eyes, similar legislation has already been proposed in Idaho and Florida, too.

“I have no doubt in my mind they will deploy in communities that want them if this bill is passed. Imagine you don’t have to go to 7-Eleven to get milk, it comes to you,” Brandes said.

As the Tampa Bay Business Journal points out, Brandes is no rookie to taking leaps of faith when it comes to welcoming new forms of technology. He has shown interest in local autonomous vehicle development and visited Pittsburgh when Uber tested driverless vehicles last year. While the bill requires a companion bill in the House, Brandes doesn’t foresee any issues finding support.

And as Idaho’s KTVB news team put it, “R2-D2 is about to come out of retirement!”