Favorable economic conditions and an influx of megaships has driven ports across the U.S. to invest in technology and infrastructure.

Favorable economic conditions and an influx of megaships has driven ports across the U.S. to invest in technology and infrastructure. 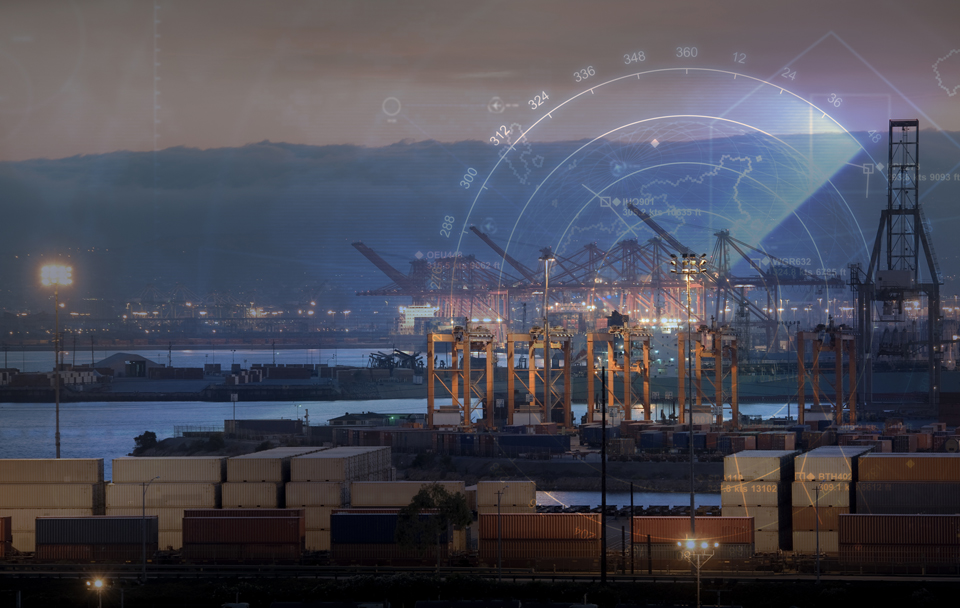 A tremendous amount of our goods in the U.S.—and 90 percent globally—are imported and exported via the oceans, a medium we’ve been relying on for hundreds of years to get our goods where we need and want them to go.

The last few years, however, have been unprecedented. As of this writing, favorable economic conditions have led to an increase in demand for cargo shipping.

U.S. imports have risen almost 19 percent since 2012, and many of the top 20 ports by import volume in the country have seen close to a 30 percent increase in import traffic. In 2016, these 20 ports handled a majority of port traffic—97 percent—in regards to imports.

Experts can study and predict performance and upcoming trends of local, national, and global economies at the threshold of these ports: from a fluctuation in volume of commodities to the growing size of shipping vessels, each and every data point at the entrance of ports is providing insight into current and future trends.

Currently, this increase in activity at U.S. ports is being mirrored around the world. The Panama Canal expansion—which was started in 2007 and wrapped up in 2016 and was built to accommodate the super-sized cargo ships that are becoming the norm—was a major driver for investments in port infrastructure the world over. The market here at home responded in kind with a slew of U.S. port upgrades.

To understand the need for U.S. port upgrades that are planned or taking place right now, first it’s important to grasp the technology that’s at play.

Radio-frequency identification (RFID) and differential global positioning systems (DGPS) have created an environment that supports accurate, real-time information. These tech points are key for running a port efficiently, allowing precision timing of when cargo will arrive and be available for pickup.

As technology has provided the ability to see into every part of the supply chain, the supply chain has become more efficient. This, in turn, has driven the size of ships up exponentially. These megaships can accommodate far more cargo, and are currently putting the pressure on ports’ cargo handling capabilities.

“Another major development is the forming of alliances among container carriers, which has significantly complicated the inter-terminal logistics between the different terminals in a port complex,” Ng said. “All these (and other) realities have not made cargo handling easier at today’s seaports.”

This cyclical turn of events now has ports looking back to technology—and improved infrastructure—to solve the problems megaships bring. 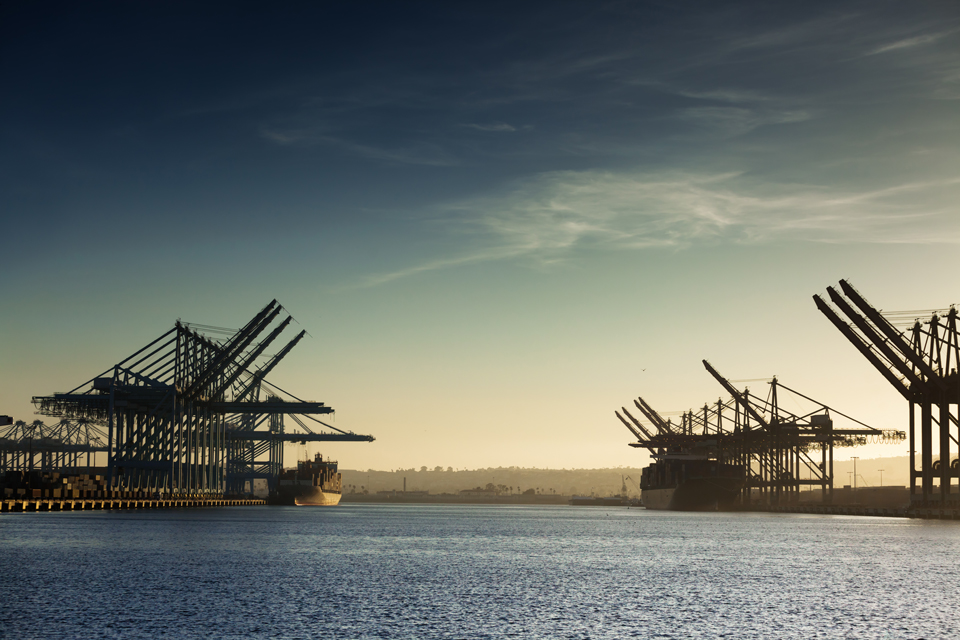 No place else in the country is a better example of a U.S. port upgrades and the combination of technology and improved infrastructure than the largest port in the U.S., the Port of Los Angeles. This gateway was ranked number one in 2016 in terms of import volume with 3.4 million TEUs (twenty-foot equivalent units, standard measures of the industry) imported.

Continued expansion and improvement over the last few years have included the completion of the first phase of a container terminal automation program, as well as roadway enhancements in the harbor area.

What caught our attention, however, was the pilot program the Port of LA and GE Transportation implemented: Port Optimizer. The introduction of this cloud-based software solution has allowed for better planning and predictability across the entire supply chain. With the continuing inclusion of more data points at ports, Port Optimizer is able to tailor real-time information from a variety of sources depending on who is looking at the data.

“Traditionally, supply chain operations consisted of multiple systems, each designed to measure and monitor singular aspects, for example ocean transit,” GE Transportation shared. “There has not been the ability to consolidate and provide that ‘single pane of glass’ that supply chains need to see how cargo is moving—holistically.”

Port Optimizer integrates data from across the port ecosystem. It combines machine learning and deep domain expertise, assisting supply chain professionals in monitoring and responding to a rash of conditions.

GE Transportation claims it increases visibility, predictability, and throughput, and ups productivity by 8 to 12 percent. The pilot program with the Port of Los Angeles was so successful that GE has now partnered with the Port of Long Beach to bring its solution to a broader audience. Another partnership in the region, the International Transportation Service (ITS) recently launched a predictive visibility solution with Advent at its port terminal in Long Beach.

And starting in the Port of Los Angeles, Amazon will launch its new delivery service for businesses called Shipping with Amazon. Currently, the largest internet retailer in the world functions as a freight forwarder and logistics provider, but the company does not own any ships. Don’t expect that to slow down Bezos and the team, though. Amazon has disrupted, revolutionized, and sometimes destroyed markets it’s moved into. What’s next for shipping with Amazon in the fray, and how will this giant retailer’s foray into shipping affect U.S. port upgrades of the future? 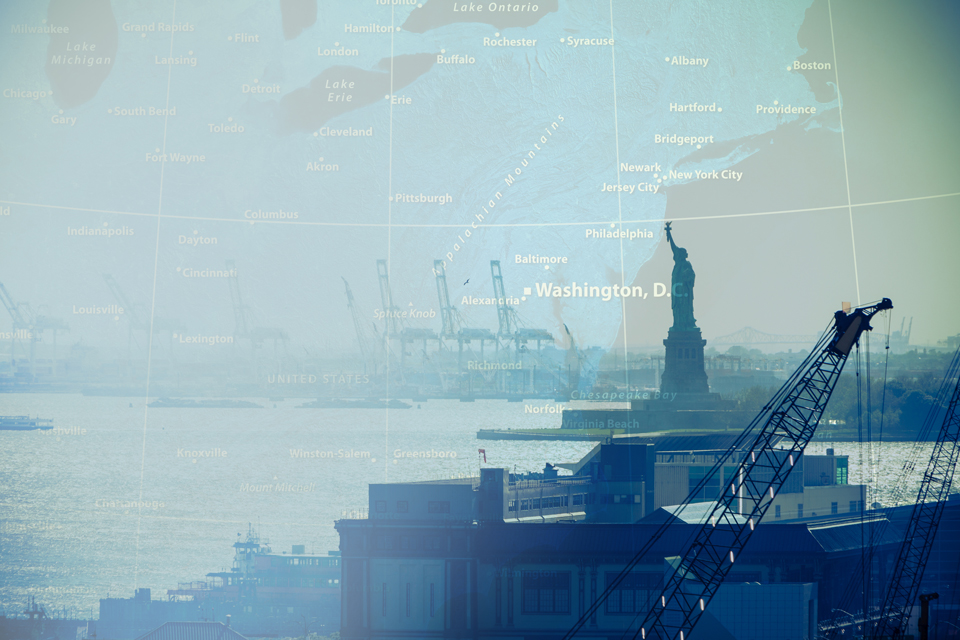 I may be a little bias in thinking that the West Coast is the best coast, but the East Coast of the United States also has big things happening at its ports. Maryland’s Port of Baltimore has shown what happens when tech and infrastructure investment occur: success.

The fourth-fastest growing port in the U.S., the Port of Baltimore saw eight million tons of cargo handled in the first three quarters of 2017. Bigger ships are bringing more cargo, and Baltimore was ready for it.

Supersized cranes and the purchase of new land to account for the larger ships helps the Port of Baltimore future proof its gateway to the seas. The city of Baltimore is also a recent recipient of a grant from the US Department of Transportation’s program, TIGER (Transportation Investment Generating Economic Recovery). The $20 million will go towards building state-of-the-art cargo handling facilities called the Mid-Atlantic Multi-Modal Transportation Hub at the Sparrows Point Industrial Facility in East Baltimore.

Also jumping on the tech train, the Port of Baltimore has awarded defense and security company Saab a contract for its information management system, KleinPort. This port management information system provides many different users along the supply chain access to information and the ability to submit requests electronically, reducing the hassle and mistakes caused by paper or phone systems.

Baltimore isn’t the only port of note, however. The Port Authority of New York and New Jersey recently announced a $4.3 billion capital plan that includes adding 64 feet of air draft to one of its bridges to provide open access for megaships to the Port Newark-Elizabeth terminal.

This is big news for a port that accounted for just over 15 percent of all U.S. import TEUs, allowing the region to bring in even more cargo in the years to come.

We’re only scratching the surface of the monumental infrastructure and technological developments of current U.S. port upgrades. Favorable economic conditions seem to be on the horizon for the next few years, but the increase in tariffs and the potential for a trade war with China, and potentially other countries, could add a bit of fog to the horizon.

Ports and importers alike will need to keep their fingers on the pulse of the industry and political decisions to make sure that when it comes to increased infrastructure and technology, they continue sailing in the right direction.