Although Canada is no longer the largest exporter of uranium ore in the world—that spot has belonged to Kazakhstan since 2009—15 per cent of the...

Although Canada is no longer the largest exporter of uranium ore in the world—that spot has belonged to Kazakhstan since 2009—15 per cent of the world’s global production of the commodity still comes from the country. A high 85 per cent of the ore mined is exported, with the remained used to fuel CANDU reactors in Canada. A majority of uranium ore output still comes from one mine: McArthur River.

But since the country lost the top exporter spot, the industry has been in a period of flux. Here are a couple of updates from the sector as it grows and changes.

Good Results out of Athabasca Basin

The joint venture has shared the results of two surveys from Saskatchewan’s Athabasca Basin at Clearwater West, the site of the world’s largest source of high-grade uranium. Analysis of data from a high-resolution magnetic survey and Fission 3’s patent-pending radiometric airborne survey determined there is a cluster of “radiometric anomalies near existing EM Conductors.” In layman’s terms, this cluster could be a uranium boulder field or uranium outcrop.

“It’s becoming increasing clear that this is a highly prospective project.”

“These results represent a very promising start to the first year of exploration at Clearwater West and warrant follow-up ground prospecting and mapping,” said from Ross McElroy, COO, and Chief Geologist for Fission 3 on Brades Resources’ website. “We are particularly encouraged that the radiometric anomalies have been identified in the same area as the magnetic low corridor and coincident known EM conductors, possibly related to a structurally associated metasedimentary corridor as is common in Athabasca Basin area deposits.  It’s becoming increasing clear that this is a highly prospective project.”

Both uranium boulder fields and uranium outcrops are uncommon, meaning it bodes well for the prospectivity of the project. The joint venture is only in the early stages of its first year of exploration, but both companies are optimistic.

How would you react to the news that uranium miners want to develop a sizeable deposit of radioactive metal near where you live? Like many residents in the area for the past 30 years, and especially Makitagunarningit, the anti-uranium group, attitudes towards the project are not positive.

The Nunavut Impact Review Board is presenting its second proposal to eventually build a mine on the tundra. Areva, a uranium mining, milling, and exploration company based in Saskatoon, Saskatchewan, is proposing to build one underground and four open-pit mines just west of Baker Lake, on the edge of 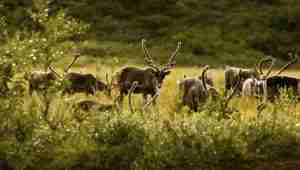 the calving grounds of one of the North’s great caribou herds and near the largest and most remote wildlife sanctuary on the continent. This is what Makitagunarningit is most concerned with. Wildlife boards in the region oppose the construction of the mine.

However, the $2.1 billion project would provide at least 400 jobs, many reserved for local Inuit, and its annual payroll would be $200 million for at least 17 years.

With the low price of uranium, construction could be delayed for years. There are too many unknowns — the effects of the mine itself, the amount of development that follows along the road it builds, the state of the herds and the environment by the time the project actually begins. Makitagunarningit is aware of these unknowns, and hopes they can stave off this next advance on the land.

New developments in uranium mining are constantly being reported, including a recent call to end uranium mining. The meeting of the World Uranium Symposium in Quebec at the end of April showed 300 delegates from 20 countries asking for uranium mining, and nuclear power stations and nuclear weapons be closed, disposed of or banned.  A change like this won’t come to the industry for years, but it is not a threat to take lightly, either.