Tintina Resources is working with the locals at every step of the process to get the Black Butte Copper Project up and running in the next five years.

Tintina Resources is working with the locals at every step of the process to get the Black Butte Copper Project up and running in the next five years.

Mining is generally not an industry that many people associate with sustainability or collaborative efforts with the community. Decades of legacy issues from mining companies in Montana could have left locals fearful and angry when a new mining venture moved into the White Sulphur Springs region two decades ago. Instead, the Black Butte Copper Project run by Tintina Resources is one of the most promising projects in the country, largely because of the strong relationship forged between the locals and the company.

“The project and the community are intricately tied,” said CEO Bruce Hooper. “Our VP of Exploration, Jerry Zieg, is from the community and was involved with the discovery in the 1980s. When the ranch owners were approached to lease their land for development by multiple companies, they approached Jerry as the local they trusted to develop this project.”

Why was there interest from multiple companies? The strength of the project is its incredible grade, which at over 3 percent copper is one of the highest grade undeveloped copper projects planned in the world. This makes mining completely underground an economically viable proposition compared to other projects. In addition excellent infrastructure and being close to a supportive town, road, rail, and grid power give it many low-cost advantages.

To build on Jerry’s local relationships, trust and transparency are the keystones upon which the project and its relationship to the region are founded. The state of Montana is recognized as a national leader in transparency and, as PR Director for Tintina Nancy Schlepp (also a local) shared, Tintina Resources takes this distinction to heart.

All finalized reports are available on the company’s website, updates are posted on its Facebook page, and employees regularly meet with the community and region, but its monthly tours are the most important and effective outreach effort.

These tours usually boast around 50 people who are interested in the operations and developments, and allow the company to answer any questions people might have about the project. The interest in tours is often so great that private tours are given numerous times a week. 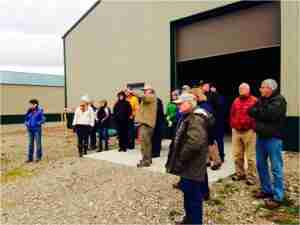 Jerry Zieg giving a tour of the future site of the Black Butte Copper Project.

“This allows us to emphasize our mission and goals to the community: the excellent location of the deposit and the safe and environmentally friendly manner it can be developed,” said Zeig. “We can share with them how this will be different from the historical mines, and that modern mining can and does fit in with the environment worldwide.”

Black Butte Copper Project’s protection of the environment is a constant topic of conversation between the community and Tintina. Detailed geological studies and four years of water hydrology baseline data have allowed this team to develop an excellent understanding of the job ahead of them right from the beginning.

“We’ve done extensive tests with the mineral makeup and rock chemistry,” Zeig said. “We’ve run static and humidity cell tests to understand our geo-chemistry and our water hydrology testing has included 30-day pump tests to understand draw down areas and cones of depression. We’ve ran these tests much longer than most [standard] tests, but we didn’t want any surprises.”

When you put all the pieces of the environmental protection puzzle together, what does this 21st century mine look like?

When the mine is opened for production, it will fill newly mined stopes with cemented tailings, which are the leftover rock after the copper minerals are separated from the mined material. Because of this, only about 1 percent of the underground mine is open at any given time. This keeps the mined areas from oxidizing and releasing metals.

The project will affect less than an acre of wetlands and all openings (including the tunnel entrance) are about 200 feet above groundwater level. All water used during the production process will have its quality improved through reverse osmosis water treatment before it’s returned to its groundwater source. And once the useful life of the mine has run out, there will be no rock piles left on the land, which has historically been an issue for other mining companies.

Above and beyond this, Tintina’s plans for managing production waste and the transportation of the mined copper stand out among the project’s environmentally friendly strategies.

Historically, tailings have been submerged behind a dam, a few of which have failed. As an alternative solution to this, Tintina will cement the tailings inside a double-lined earthen enclosure where they solidify into a non-flowable mass.

Such facility can be easily managed during mine production and then sealed and reclaimed for cattle grazing after mining is completed. Cementing all the tailings, half underground and half on surface in a double-lined facility, is a great way to protect the environment.

“There’s no risk of environmental impact, it’s a safe method for dealing with the leftover rock, and will allow us to reclaim all areas as we finish with them,” Hooper explained.

“This is one of the highest grade copper projects in the world, and we’ve been able to design a development that is all underground, with 100 percent mineral extraction by replacing all voids underground with waste rock.”

“We’re looking to implement a system brought from Australia: shipping containers with a locking lid,” he said. “These containers are loaded with the copper concentrate at site. [At] each stop along its journey to the smelter the concentrated copper is contained and clean.”

This means safer transport, fewer impurities in the copper concentrate, and a smaller environmental footprint as fewer modes of transportation and transfers are needed.

But before Tintina Resources can even begin shipping to the smelter, the company has to complete the permitting process, which will take approximately two years, and then the construction period, which is anticipated to be another two years after that. Schlepp is optimistic that the mine permit will not take longer than anticipated, and that the company will bring jobs into the region in the near future.

“Our community has been depressed since timber mining shut down in the ’80s,” she shared. “So we need a catalyst to encourage business and stimulate the region economically. We want to leave things better than when the company started.”

Tintina anticipates 200 jobs during the construction phase, with 230 full-time employees and at least 50 contractors during operation. These jobs will go to locals first.

“All mining companies need to work strongly with their community to earn their social license, and we’re committed to doing everything possible to ensure this happens with the Black Butte Copper Project.,” Hooper said.

We at Tintina are very proud of what we are doing in bringing the Black Butte Copper Project forward to apply for a Mine Operating Plan this year with a dedicated focus.

The plan is to build a high grade underground copper project some 15 miles north of White Sulphur Springs in central Montana where we have strong local and community support to ‘Do it Right from the Beginning’.

The great thing about this is the quality of the deposit -- it runs over 3% Copper and is one of the highest grade undeveloped copper projects in the world . The project is 100% owned and leased from the private ranchers, and it is close to infrastructure and can be mined underground with the plant site located in rolling hills away from the streams. The high grade allows this project to have one of the lowest environmental impacts for a new mine in the world.

Tintina, due to the quality of the project, is funded for these studies and supported by its major shareholders to invest and develop in this high quality and profitable project in Montana.

We will also explore the deeper higher grade parts of the mineral system, where we have over 5% copper and so hope to extend the mine life for many years to come bringing benefits to all our stakeholders especially including our shareholders.

We are currently focussed on producing a detailed assessment on all facets of mining the Johnny Lee deposit for inclusion in an application for a Mine Operating Plan which we plan to submit later in 2015. This will be open for public comment and Montana Department of Environmental Quality review which will include a detailed Environmental Impact Study completed independently by a third party.

The Tintina team are looking forward to showing you our project on our website, how we do it right, and the positive contributions we bring to the community.

If you are in Montana please drop in and see us at any time in White Sulphur Springs or join us on our open tours to show you how we will develop this exciting project. 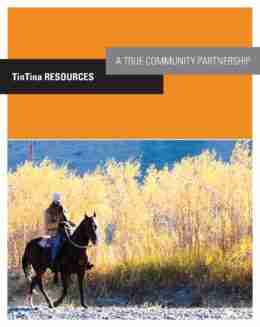