The Next Generation of Cooks: Robot Chefs

Fewer and fewer people have time to prepare a home-cooked meal anymore. Many are relying on fast food and prepackaged convenience foods, which is contributing...

Fewer and fewer people have time to prepare a home-cooked meal anymore. Many are relying on fast food and prepackaged convenience foods, which is contributing to the alarming obesity rates in the United States. Inventors are currently working on options that would allow people who aren’t interested in cooking, as well as those who are unable to prepare their own meals, to eat healthy foods in the comfort of their own homes. The inventors are developing ‘robot chefs’, and the hope is that they will become a trend with the younger generation, who have become used to instant gratification in many aspects of their lives.

Although robots have been successfully employed in factories for decades, making them functional in the kitchen has proven to be quite a challenge. The major concern is that it can be difficult to replicate human movement. Designing a robot with human-like hands requires exceptional skill. For example, the robot chef Moley Robotics plans to release to the public in 2017 has more than 100 sensors, 24 joints, and 20 motors in the hand. Ideally, it will be able to make anything a chef can by following the precise motions a professional would use to create a meal. 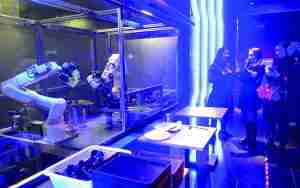 Some of these robots are designed for manufacturing and others were created specifically to work in individual homes. For example, robotic Chef Cui has been slicing noodles since 2011. By purchasing these robots, factory owners can replace their human noodle slicers, who would normally earn about $5,000 per year.

Koya and Kona, a pair of robotic arms, are the top chefs at Toyako Ramen in China. One is in charge of boiling the noodles, the other is in charge of the soup. They work together and can finish making a bowl of noodles in under two minutes.

“For me the most important thing is how good the noodles taste,” one patron said. “Otherwise I wouldn’t come back.”

While the robot chef duo is a novelty selling point, guests continue to come back, as the quality is still there.

Robot chefs created for home use are able to help the elderly, disabled, or simply just very busy people eat healthy meals. Robots in the home offer many advantages beyond giving people the ability to eat home-cooked food. They provide independence to those who may not otherwise be able to live on their own due to age or disability. 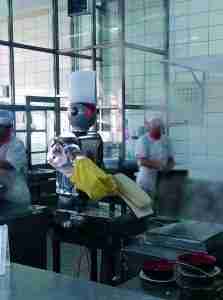 For people who live alone, the concern about food waste can be alleviated through the use of a robot chef. These robots use exact portion sizes to ensure each freshly prepared meal doesn’t go to waste. People who own and use them won’t have to worry about leftovers or throwing away unused food products. Because the most advanced robots have a vast menu selection, users can have plenty of variety in their diet.

Since the 1980s, when dual-income and single parent families became more widespread, families have spent less and less time in the kitchen and have been eating fewer meals together. This trend has led to an entire generation of people who don’t know how to cook. Many of these people would rather eat out than fumble around in the kitchen. With a robot, those who never learned how to prepare a delicious meal will have the ability to serve and eat a variety of home-cooked foods with family and friends.

People with mobility challenges might need help keeping a robot chef clean. In order for this type of device to prepare healthy meals, it needs to be sanitary. In order for an elderly or disabled person to successfully use a robot chef, they may need assistance with cleaning and maintenance. With the right support, a robot in the kitchen offers significant advantages. There may be a learning curve to using these robots that people with certain disabilities will need to overcome. They are designed to be user-friendly and work with the help of a smartphone app; users will need to understand how to order the meals through the app in order to make the most of their investment.

While robots in the home have been seen in movies and children’s programming for a very long time, the cost of creating them for widespread use has been prohibitive. Even the models getting close to market today are too expensive for the average consumer. With a price tag of as much as $75,000 and additional expenses for consumables, most people won’t be taking advantage of this technology right away. However, like most modern innovations, the price will likely drop significantly if the robots are successful. After all, the people who need them must be able to afford the cost of owning them. 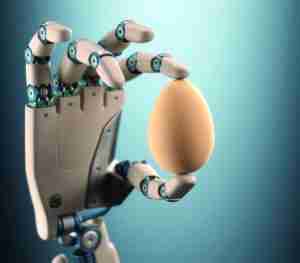 Chef Chui is already slicing noodles with precision in Asia. However, Cooki, the robot chef that will allow owners to order a meal from their smartphone and get an alert when their dinner is ready, won’t be available for several months. The Moley Robotics version should be available to the public in 2017. Owners of this robot will have the option to choose among 2,000 meals that can be ordered remotely and prepared in the automated kitchen before the family arrives home.

Robot chefs aren’t nearly as far away as we once thought, and could be coming to a kitchen near you as early as next year.