Land of the Flat White. Home of the brave.

Land of the Flat White. Home of the brave.

Starbucks has doubled down on its commitment to hiring U.S. veterans.

After hitting an initial goal of hiring 10,000 U.S. vets a year early of its 2018 target, Starbucks announced it was choosing to extend its commitment to support those who have served America. The company’s initiative will increase its goal to 25,000 hires by 2025.

During Starbucks’ annual meeting, Chairman and CEO Howard Schultz explained, “These are extraordinary people who have been through extraordinary things, but they come back with skills, leadership, ethics, integrity, not an ounce of entitlement.

“And every one of them that has come to work at Starbucks, in our office, wearing the green apron, on their own merit have done a great job, but they have made us a better company. We are better because of them.”

This was also Schultz’ last annual meeting as CEO and loud cheers took place once he told shareholders, “I am proud to announce that we have already met and exceeded that [10,000] goal.” 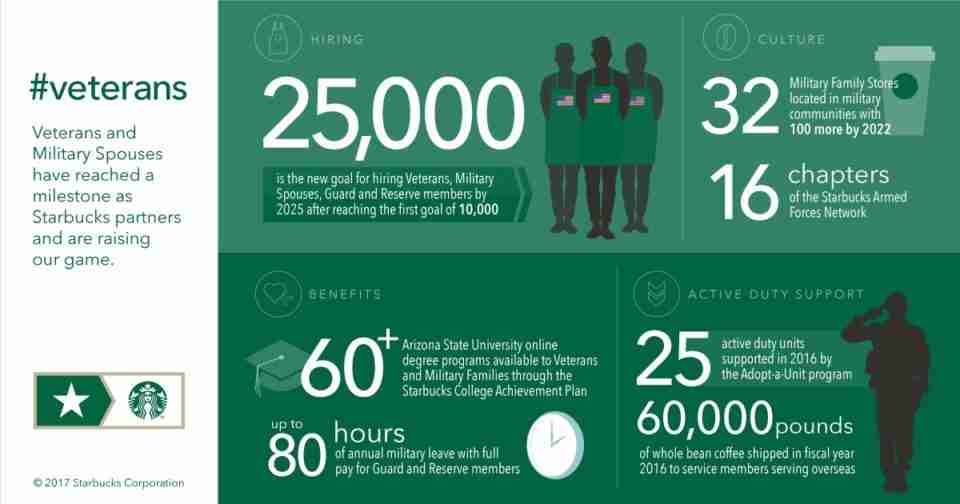 More Company Pledges
Additionally, Starbucks will open 100 more Military Family Stores over the course of the following five years. There are currently 32 of these locations, adjacent to military bases, that are staffed by veterans and military spouses.

Starbucks announced they will also be partnering with No One Left Behind, an organization founded by a veteran and his interpreter aiming to help resettle interpreters and other personnel—as well as their families—who have worked alongside U.S. troops abroad.

Starbucks made other 2020 plans to hire 100,000 younger employees—either not in school or unemployed—to strengthen a commitment to hire 10,000 by 2018, a pledge which it exceeded, too.

The official company website was updated with Starbucks commitments, including, “Expanded benefits, establishing places for our veteran and military family community to connect with one another, creating volunteer opportunities in their communities and leveraging their unique leadership experience to positively shape our company and our world.

“Veterans and military spouses play a vital role in strengthening communities through leadership, service and active civic engagement. Veterans are more likely to vote, volunteer, give to charity, and contact public officials as compared to their non-military counterpart.”

Starbucks’ not-so-new goal of being a leading corporate advocate and voice for transitioning veterans, military spouses, and military families is strengthened through partnerships with similar companies on the same mission as military and veteran service organizations

“We strive to bridge the divide between the 1 percent of Americans who have served in the U.S. military and the 99 percent who have not.”

Howard Schultz’ Legacy
Schultz is to be succeeded by Starbucks President and COO Kevin Johnson on April 3, 2017. Company shares have faced a lull, and Schultz admitted that recent stock performance over the past year was a “bit soft”

Odd behavior for an organization with a market value of a whopping $250 million during its 1992 initial public offering that has grown to more than $80 billion now.

Schultz added, “We’ve always taken the long view and we’ve always tried to invest ahead of the growth curve.”