CES 2018 had a plethora of amazing consumer products, but these smart home innovations were our favorites.

CES 2018 had a plethora of amazing consumer products, but these smart home innovations were our favorites. 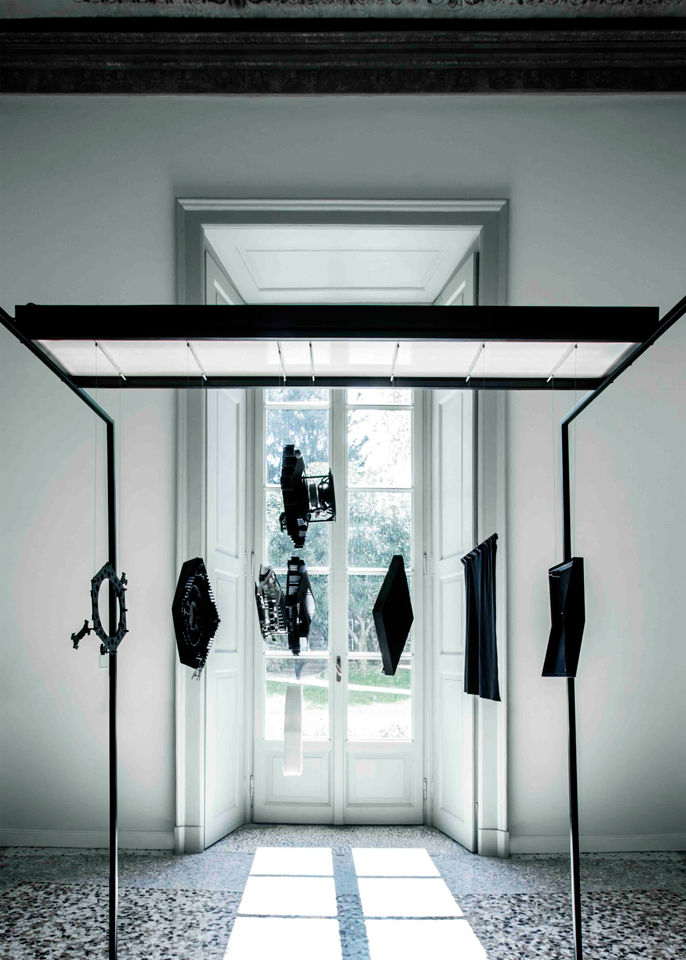 Another New Year, another CES drawn to a close. The 2018 Consumer Electronics Show had its fair share of bumps in the road—including flooding and a short blackout—but it still managed to rack up the records.

It was the largest event in the show’s 51-year history, with over 3,900 exhibitors and 2.75 million square feet of exhibit space. The event was even bigger on social media, with over 860,000 tweets.

But let’s get to the good stuff. The consumer products showcased this year continued to highlight the growing want for smart home innovations. From the wacky and wild to the thought-provoking and useful, take a look at our favorites from this year.

Gone are the days when pops and fuzziness were part of the listening experience on a record, or the muted, tinny playback from an iPod fill your earphones. There are several brands that are bringing sound and music to the highest quality, but Bang & Olufsen has nailed both function and design.

The BeoSound Shape’s two-tone tile design is one of our top picks for smart home innovations. Each tile includes speakers, amplifiers, sound-absorbing acoustic dampeners, and a “Core” that handles connectivity. Users can put as many as they want together, in whatever configuration they want, creating a piece of art as well as an audiophile’s dream. 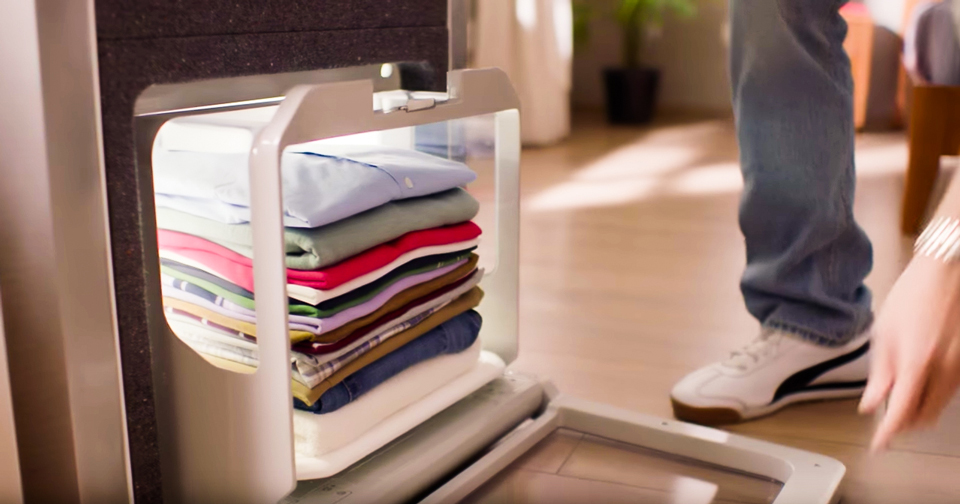 The future is here, folks. The Foldimate is a winner among parents, lazy teens, time-poor, full-time workers, people with arthritis—everyone. This is a winner for everyone.

Although this smart home innovation that will fold your laundry for you won’t ship until Q4 of 2019, it certainly is capturing our attention now. It folds tops and trousers from pint-sized kids cloths to adult XXL, as well as towels and pillowcases. Although it can’t handle the smaller items like baby clothes or bulkier items like comforters, it can fold an average sized load of laundry—20 to 40 items—in two to four minutes. Sign us up. 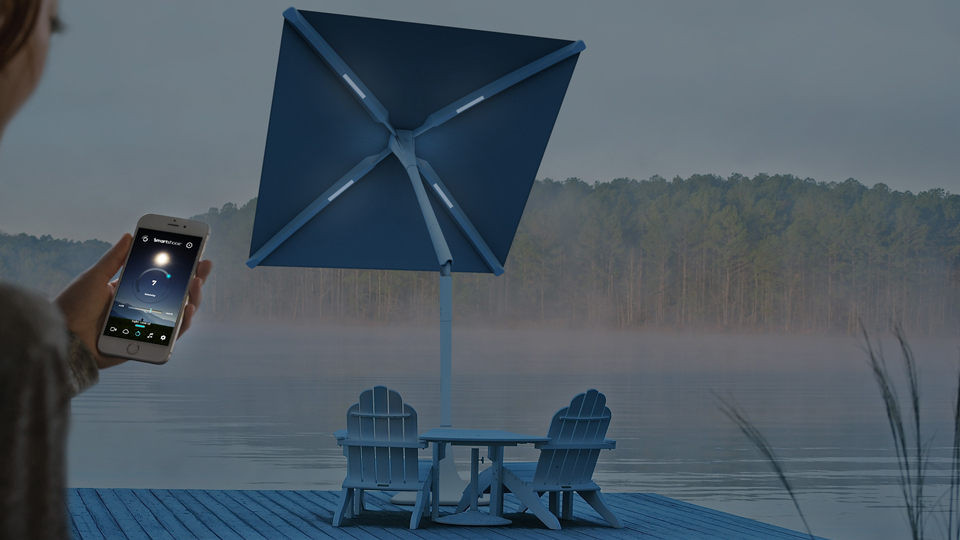 Mark this one under unnecessary, but awesome. Although beach umbrellas don’t necessarily need to be high-tech, Shadecraft has made one that is kind of hard to say no to.

Sunflower is a solar-powered robotic sunshade. Want to interact with your smart home devices? Sunflower connects to your Wi-Fi and Alexa. Feel the need to dance? Its built-in Harmon Kardon speakers will get the groove going. Need a little extra security? There’s a camera built into the pole. It’s not a purchase made lightly though: this neat little invention is kind of pricey at $8,000. 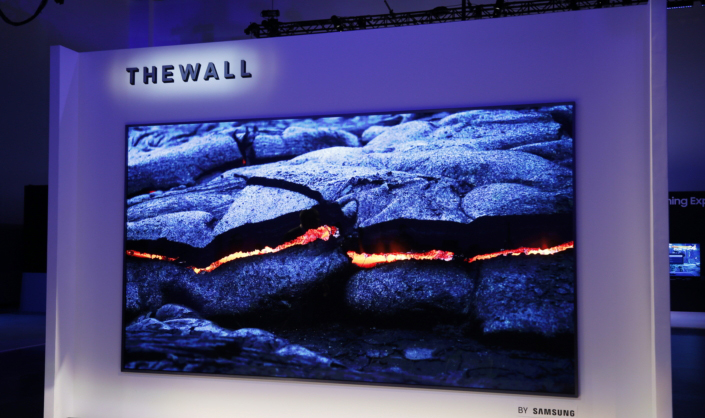 Samsung has had a great few years at CES, garnering a lot of attention in 2017 for their TV designed to look like framed art when turned off. 2018’s entry was even more impressive.

If you think a TV called “The Wall” is big, you’d be right. Samsung’s smart home innovation contains modular, borderless MicroLED TVs that fit together into one giant screen 146 inches large diagonally. Of course, you could use fewer screens and make up a smaller total viewing screen, but what’s the point of that? 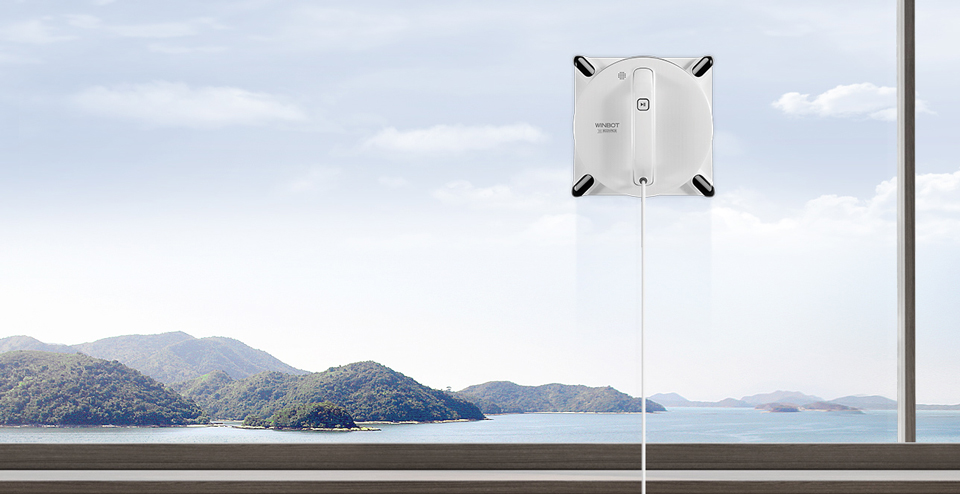 From the giant to the tiny, CES had everything. And the Ecovacs Winbot X is one compact cleaning machine.

This cordless window cleaning smart home innovation solves so many of the problems that come with the tedious task of cleaning windows: it can get into the hard-to-reach spots, won’t leave streaks, and, most importantly, can do it all without you. It’s the first of Ecovacs offerings to run on battery power and has a backup safety system in case the robot loses suction or detaches from the window. 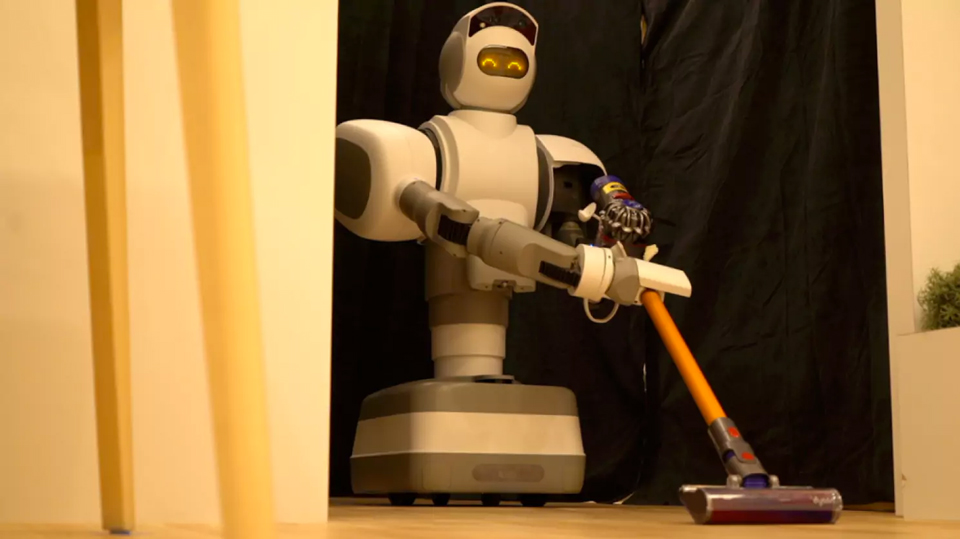 With many comparisons to Rosie the Robot from the cartoon The Jetsons, Aeolous Robot has the ability to become the most important smart home innovation you could own. That’s because anyone who can’t function without a clean space would benefit from one of these, including busy parents and lazy anybodies.

The Aeolus Robot showed of its skills by mopping, picking up toys, moving furniture, and getting drinks from a fridge at CES this year, and consumers were impressed. Each robot is connected to a network, which allows the robots to use artificial intelligence to get better at its job the longer it does it. Even now it can associate specific items—a pair of glasses, for instance—with the owner of the item.

One of the most practical items, at least in this writer-with-a-weak-stomach’s eyes—is the LinkSquare from Stratio, Inc.

With a quick scan, this smart home innovation can tell if meat is rotten, if alcohol isn’t all it’s meant to be, or if the prescription pill you received is what you were supposed to receive. This could save many tummies from food poisoning, and you a lot of worry with what you’re putting into your body. It can even disseminate if money is counterfeit. It’s small size is the best part, allowing you to carry this easily in a pocket or purse. 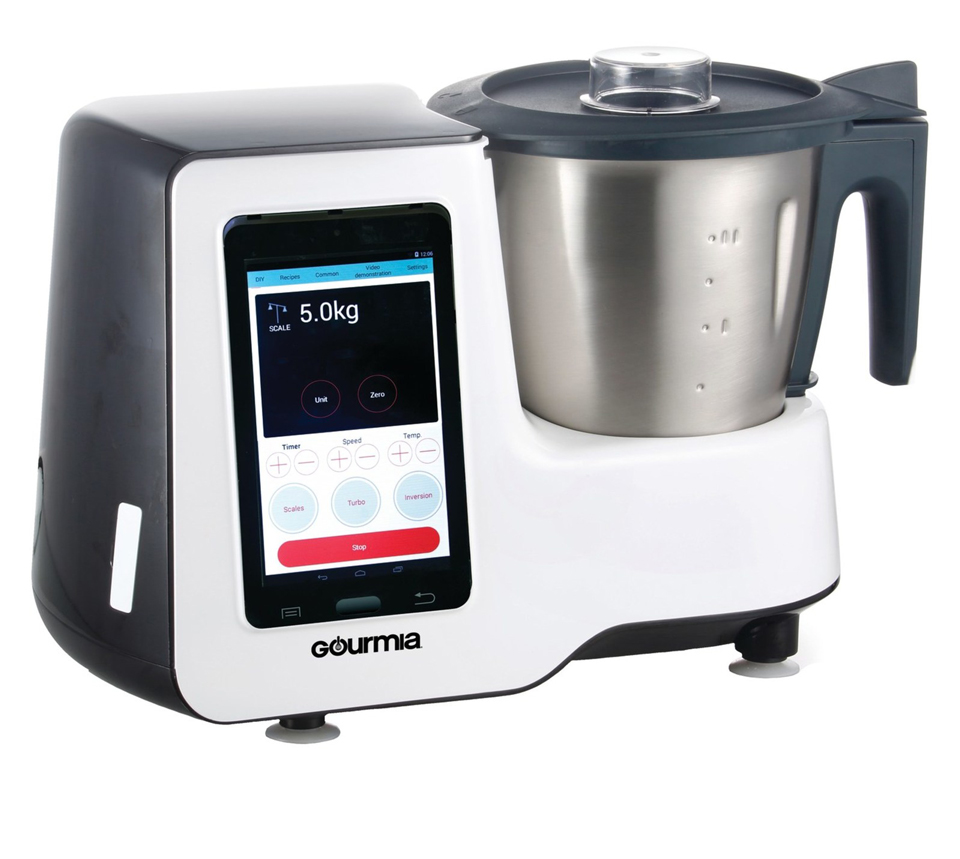 Coffee is what keeps most of the population awake and running, so why not have your coffee pot work for you?

The Gourmia Smart Coffee Maker answers user commands to grind beans with it’s built-in grinder, brings water to the right temperature, and brews your coffee—up to 10 cups—based on your specifications. The grinding chamber is dishwasher safe, and its delay timer and easy-to-read display further simplifies your morning cup of joe. Oh, and like most smart home innovations these days, it pairs with the Gourmia mobile kitchen app. 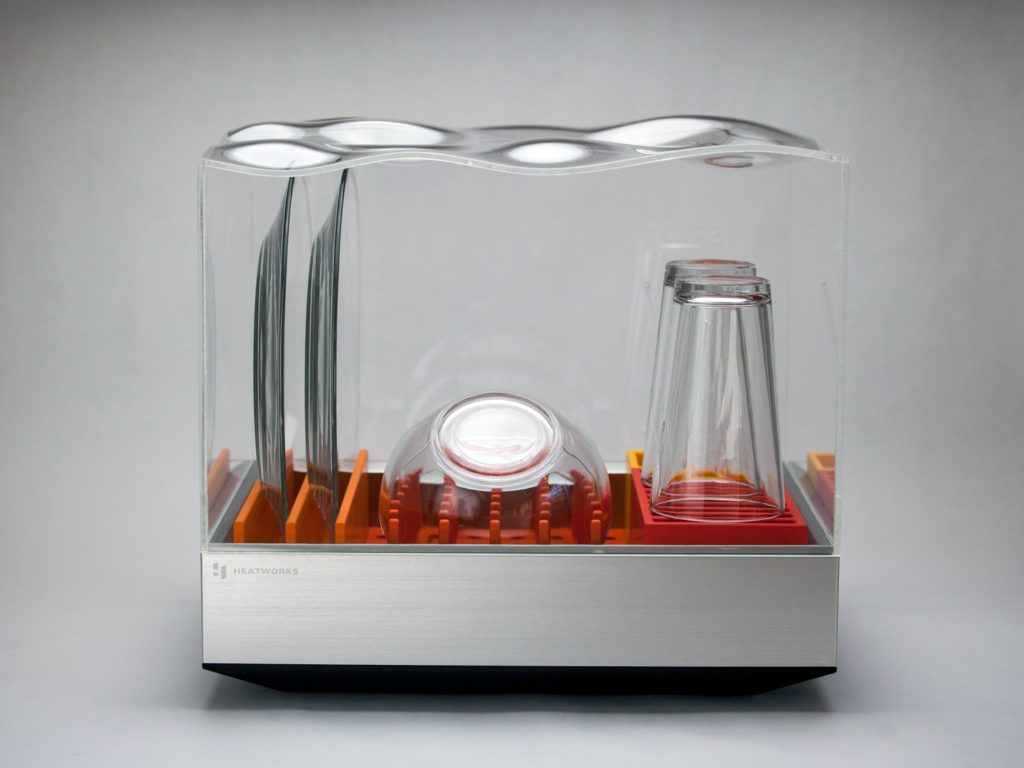 Doing dishes has been high on the list of hated housework since there have been dishes to wash. Dishwashers, of course, simplify the process, but do you really need a machine big enough to wash for a dinner party of 10? Many households in the U.S., after all, only contain one or two people.

That’s the question Heatworks asked when creating Tetra, its smart home compact countertop dishwasher. No plumbing hookup is necessary—you fill the drum by hand with a half a gallon of water a load. It’s transparent, which was many people’s favorite feature. Ours? it takes just 10 minutes to wash two place settings. 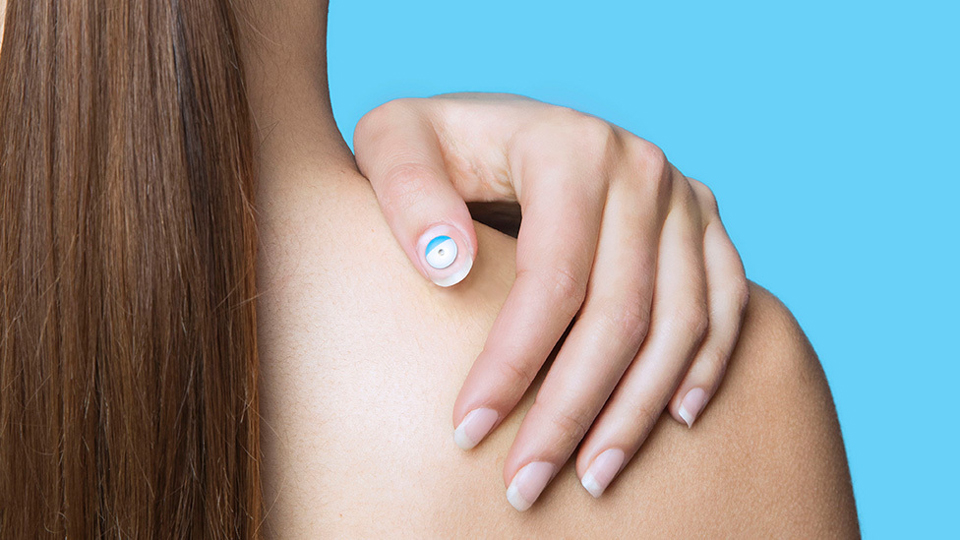 Ultraviolet light is one of the leading causes of skin cancer. While many of us are now committed to lathering on the sunscreen at the beach nowadays, that’s often not enough to protect from UV exposure.

L’Oréal has a fascinating solution. It’s UV Sense, which is small enough to wear on your fingernail, is able to detect UV exposure with its built-in sensor. It can store data for up to three months, and actively transfers the data to your smartphone anytime the app is open and near the device—NFC FTW.