Shelton Haynes is elevating Roosevelt Island into the hidden gem New York City has been waiting for. 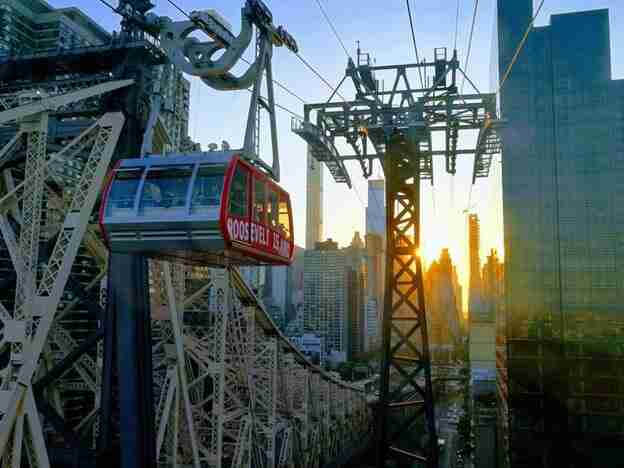 Roosevelt Island, a hidden gem in NYC, has undergone a facelift, solidifying it as a must-see destination in the Big Apple

Despite being accessible by multiple transportation options — subway, ferry, Roosevelt Island Bridge, and the oldest urban commuter tramway in the country — New York City’s Roosevelt Island gets a bad rap for being hard to access. Motorists on the 59th Street bridge get a bird’s-eye view of the charming, two-mile-long island in the middle of Manhattan’s East River that, once reached, reveals magical delights not typically found in one of the world’s largest cities. And growth is on the agenda for this hidden gem.

The island’s abundant green spaces and affordable rents attract those seeking peace amid the sparse population of about 12,000. Its geographical and historical uniqueness flourish due to the stewardship of the state-run agency Roosevelt Island Operating Corporation (RIOC).

In March 2021, RIOC installed Shelton Haynes as president and CEO; he had acted as the interim president and CEO since June 2020. Haynes took time to analyze the unusual personality of Roosevelt Island and the ins and outs of what it means to manage such a place.

Before emerging as an urban hot spot, Roosevelt Island was known by an array of names — Welfare Island, Blackwell’s Island, and Manning’s Island. In 1973, the island was renamed to commemorate Franklin Delano Roosevelt, the 32nd American president, and his contributions to the country.

A List of Priorities Emerged for RIOC CEO Shelton Haynes

Before Shelton Haynes could engage in Roosevelt Island’s long-term development strategy, he tackled the big-picture, 5-alarm-fire projects. As he transitioned from interim to official CEO, the Covid-19 pandemic swept through New York City. Haynes quickly established a rapid COVID-19 testing site before he could address longer-term goals.

Of its many projects, RIOC is tasked with one project that spans decades: The completion of the island’s master plan adopted in 1969. Haynes now sees the finish line, which his team will reach with the construction of Riverwalk Building 9, the final phase of the master plan. The building is the culmination of a long-term project by two real estate developers, Related Companies and The Hudson Companies. 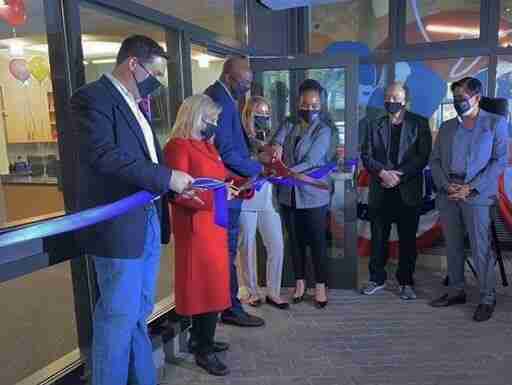 Shelton Haynes’ team has worked diligently to improve Roosevelt Island from the inside out.

“The start of work on Riverwalk 9 marks … a quarter century of work with our partner to build an entirely new and thriving neighborhood on Roosevelt Island,” David Kramer, chief executive officer of The Hudson Companies, said in a release announcing the finalization of the $185 million deal for construction of a mixed-use building featuring workforce housing, rental units, and office space.

Kramer added, “From our first planning meetings in 1997, we set out to bring these 19 undeveloped acres to life through mixed-income rental, condominium and institutional housing, dynamic retail, and beautiful new public, open space.”

Haynes said in a news release, “I cannot wait to get shovels in the ground to unveil our latest investment that will continue the tremendous economic boom we are experiencing. Once completed, Riverwalk 9 will spur further job growth, create new housing, and contribute nicely to the beauty of Roosevelt Island.”

The project is even working to disrupt the canine population’s routines as little as possible, creating a temporary dog park to stand in for the one that will have to be closed for Riverwalk 9 construction.

“The temporary relocation will be accessible to pet lovers while the field will still be available for community use,” Haynes announced in September. The Riverwalk project is estimated to be complete, with its permanent dog run, in Fall 2024. Building 9 will eventually house RIOC headquarters.

Shelton Haynes manages daily functions on Roosevelt Island but notes that some areas – like transportation – are entirely new to him. He has a BA in sociology from the

esteemed Hampton University; after graduating, Shelton Haynes worked as the chief operating officer at Georgia’s Housing Authority of DeKalb County. As he spent four years in housing work, he learned how to manage initiatives and transform underperforming departments.

Haynes has learned to transform the big picture into reality throughout his career. Since becoming CEO of RIOC, Haynes has achieved a concrete objective by increasing RIOC’s annual capital program from $4.5 million to more than $19.6 million. Such funds fuel projects such as the renovation of the Blackwell House, built in 1796, and a seawall railing replacement.

In the summer of 2021, Haynes and his team funded the final phase of the FDR Hope Memorial, a bronze sculpture honoring the former president, disability advocate, and island’s namesake, Franklin Delano Roosevelt. The act was the culmination of Four Freedoms Park, which was completed and opened as a state park in 2012.

Elegantly designed by American architect Louis Kahn before his death in 1974 and long delayed due to budget issues, the site is composed of Mount Airy granite and filled with copper beech and little leaf linden trees. The park imbues the island’s southern tip with an understated yet profound beauty.

Roosevelt Island is Open for a Variety of Businesses

Shelton Haynes champions development on Roosevelt Island and invites residents and tourists to visit its eclectic businesses, restaurants, and other attractions.

“These small businesses definitely need tourists to come in,” Haynes said in a June 17, 2021, article in The New York Times. “Many were hit very hard during the pandemic. Especially now, they need a hybrid of residents as well as tourism to stay alive.” 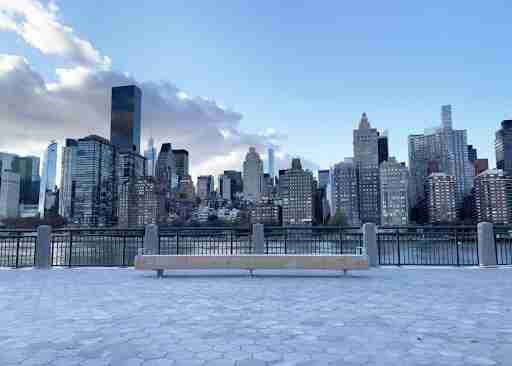 Roosevelt Island offers some of the best views of eastern Manhattan.

Haynes describes attractions for tourists and residents that came to fruition due to the RIOC’s longtime partnership with The Hudson Companies and Related Companies. Together, the two developers lease 90,000 square feet of retail on Roosevelt Island’s Main Street, Shops on Main. Destinations include Wholesome Factory, Wholesome Taqueria, Granny Annie’s Bar & Kitchen, Island OM, and a New York Public Library branch.

When the Hudson Companies and Related Companies debuted new retail in Shops on Main, they didn’t simply turn on the electricity. They rebranded, refurbished, and repainted the entire area. This construction project included updating the arcade with new lighting, signage, benches, and wood ceilings.

There’s more: Cornell Tech — the newish hub for graduate students in tech, design, law, and business — is on the verge of completing two more phases of additional campus housing. Roosevelt Island’s first hotel, the Graduate Roosevelt Island, opened on the Cornell Tech campus in 2021. Its claim to fame is the Panorama Room, a rooftop bar and lounge that provides breathtaking 360-degree views of New York.

The visionary Graduate Hotels chain includes more than 30 locations designed with nods to regional charm and collegiate culture, its spaces characterized by splashy colors, playful furniture, and more than a dash of the unconventional.

“People who have lived in New York City for 20 or 30 years have never been to Roosevelt Island,” Ben Weprin, the founder and chief executive of Graduate Hotels, said in a June 17, 2021, New York Times article. “That is the biggest challenge, to educate people on how close and easy and fun Roosevelt Island is.”

Med Abrous, a restaurateur behind hot spots in Los Angeles, Nashville, Tennessee, and Seattle, grew up in New York City. He and partner Marc Rose, another NYC native, are behind the Graduate Roosevelt Island’s restaurant, Anything At All. Via their company, Call Mom, they assembled an all-female food and beverage team to lead this New American restaurant focusing on seasonality, local offerings, and sustainability.

Abrous spoke to The New York Times, saying of his visit to the island before opening the restaurant, “I was taken aback just being in the middle of the East River. New high-rises were plentiful, and the hotel’s rooftop offered views of several New York City landmarks, from the United Nations building across the river to One World Trade Center farther south.”

While islanders understand that living in the middle of the East River is a compromise — rush hour can be admittedly tricky — the diverse island is a genuine gem, a small town sitting peacefully beside the biggest of apples.

“I am a firm believer in accomplishing our goals as a team,” Shelton Haynes says. “Our culture will reflect that as we will be strategic in our approach, modify our business model with a greater emphasis on efficiency and work together on ways to improve our organization.”