In September, the company formerly known as Maven was rebranded as The Arena Group, a nod not only to the sports arenas that characterize one of its primary business interests, but also to the planned build-up of “scalable media verticals” that will be known as “arenas.” The Arena Group’s finance vertical, anchored by TheStreet, has an additional 17 sites. 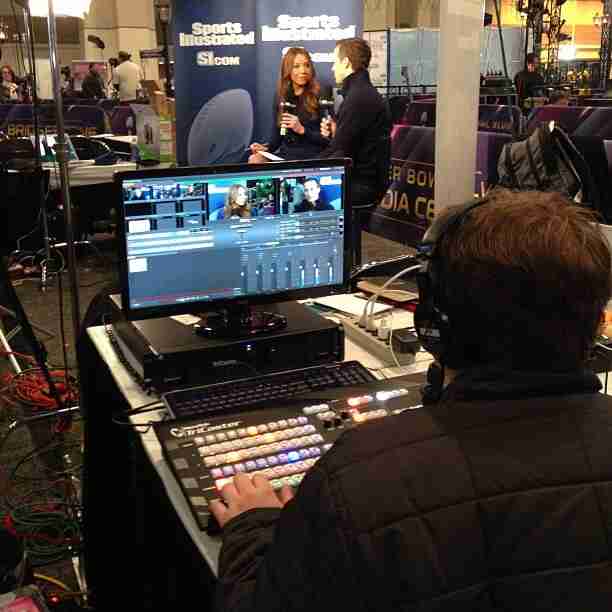 The key data is impressive:

The Birth of a Media Ecosystem

Ross Levinsohn insists that the changes he and his team have introduced do not represent a complete shift of direction for the newly-rebranded company. “Our core verticals have gotten deeper, bigger and now offer broader consumer propositions,” he noted. “We wanted an identity that captured those refined strengths. The Arena Group reflects the dynamic, tech-powered media ecosystem that we’re building, bringing together consumers, publishers, storytellers, and advertisers.”

He is quick to credit The Arena Group’s team of seasoned leaders for the dynamic new vision that is built around “robust digital destinations.” They include COO Andrew Kraft, CMO Jill Marchisotto, CRO Avi Zimak, President of Platform Paul Edmondson, and Rob Barrett, President of Media. “The last year has been one of dramatic change,” notes Levinsohn. “We have grown revenue and audience, driven strategic partnership in gambling, Podcasting, and commerce, and partnered with more than 200 publishers,” adding that the team’s dedicated efforts led to the success of the strategy.

Sports Illustrated magazine has become one of the most iconic brands in the sports industry. The United States-based publication features thorough coverage of live sporting events along with high-quality articles and stunning photography.

After facing some recent financial challenges, Sports Illustrated has benefited from committed new ownership by Authentic Brands Group and operations by Maven, and dynamic new leadership in Ross Levinsohn, its CEO. The magazine itself has seen some restructuring, which has already begun to pay off.

Today, this venerable publication has a bold new energy and a redefined focus. Most importantly, Sports Illustrated now has the resources necessary to bring its new leader’s vision to fruition.

After somewhat of a slow start, the new magazine found its footing under Andre Laguerre, who assumed the managing editor position in 1960. Under his leadership, Sports Illustrated began to showcase high-value sporting events. This innovative strategy attracted countless new readers and generated hefty profits for the company.

Sports Illustrated also became known for its exceptional sports journalism and high-quality photography. Over more than six decades, the publication has also earned several National Magazine Awards for its dedication to excellence.

The Sports Illustrated Swimsuit Issue is undoubtedly the magazine’s most popular edition. Every year, fashion models, competitive athletes, and celebrities grace the pages of this much-anticipated issue.

with a proven record of success at CBS Sportsline, Yahoo, Fox Sports and HBO Sports, , was appointed as the brand’s Chief Executive Officer.

In one of ABG’s biggest deals, digital publishing company Maven purchased the right to manage the Sports Illustrated editorial operations and print the now-monthly magazine. Maven paid ABG an upfront fee of $45 million in June 2019 for these rights.

Maven CEO Ross Levinsohn brings more than 30 years of media, publishing, and technology experience to his current role. Levinsohn earned his Bachelor of Arts in Communications from American University, and he subsequently built a successful career focused on the emergence of digital media.

Ross Levinsohn previously served as the Fox Interactive Media President and the CEO of Guggenheim Digital Media. In both capacities, he promoted the increased engagement of the respective companies’ digital brands.

Ross Levinsohn over the past decade has also supported over 30 emerging business enterprises through investments and advisory work.

Two years after the ABG acquisition, Sports Illustrated media has experienced a substantial turnaround. Marc Rosen, ABG’s Executive Vice President of Entertainment, notes in a recent story on the business, that the magazine has become profitable again.

To illustrate this profitability, the magazine’s earnings before interest, taxes, depreciation, and amortization (EBITDA) have grown more than twofold since its May 2019 acquisition. This figure closely matches the company’s projections.

There are two notable factors behind Sports Illustrated’s recent growth. In 2020, ABG negotiated 15 active licensing deals, and was expected to wrap up three to five more by the year’s end.

Although breaking news and the Sports Illustrated Swimsuit issue are free, SI.com website visitors will only be allotted a certain number of free articles before being invited to purchase a subscription.

In addition, Sports Illustrated CEO Ross Levinsohn, has supported Co-Editor in Chiefs Steve Cannella and Ryan Hunt in making numerous editorial-side investments. Realizing that readers now recognize the value of a trusted news source, they have taken steps to ensure that the magazine fulfills that requirement.

To accomplish that goal, Levinsohn has supported the hiring of additional well known professional journalists and support personnel including Howard Beck, Chris Herring and Pat Forde. The more robust staff will be well equipped to deliver a steady diet of premium written content. Photos, videos, and podcasts will also play key roles in the magazine’s retooled offerings.

Four Recommendations for Viability in the Digital Age

Over the course of 25 years, the average magazine issue has risen from $4 to $5. On the opposite end of the spectrum, subscribers of upper-end magazines often pay $10 to $15 per issue.

Publishers should decide where they fall on the spectrum. While considering the issue, they should understand that their answer will determine their profitability.

Higher-end publishers should minimize cost reductions and instead provide their readers with added value. This might take the form of heavier paper and higher-quality photography. These readers will be less likely to object to an increased price.

Lower-end publishers should make efforts to cut costs to maximize their profit margins. Readers of these publications are not likely to complain about paper quality but will probably object to a higher issue price.

A print-digital bundle deal might also promote reader loyalty. If a publisher manages multiple properties, bundling subscriptions together is another option.

If these strategies are not sufficient, publishers should target a narrow niche audience and give them premium content that provides good value. Although this strategy may result in reduced sales, the higher issue price (and quality) will likely produce a better overall result.

Thanks to the internet, consumers can find virtually unlimited information on almost any topic. However, many news organizations and publications do not consistently edit or fact check their content before publishing it. As a result, consumers have no way of knowing whether an article, press release, social media post, or other document is based on fact or fiction.

Ross Levinsohn says that publications should hire vetted journalists and photographers to craft every story. Editors and fact checkers should verify every claim or assertion before releasing the piece for publication.

This steady infusion of operating capital also permits the publication to continue offering its print edition. In the case of Sports Illustrated, subscribers also receive early access to stories, audio formats for some features, and premium content that is off-limits to non-subscribers.

Ross Levinsohn and Sports Illustrated continue to implement growth strategies designed to help this iconic brand thrive in the digital age. With Levinsohn’s marketing and technology acumen, and numerous digital publishing industry achievements adding to Sports Illustrated’s repertoire, this well-respected publication will continue to be the gold standard for quality sports journalism.