Redefining the Contemporary Architect in a Robotically Fabricated World

Why You Should Get Excited About the Next Wave of Architectural Design: Robotically Fabricated Buildings Can you envision living in a modern world built by...

Why You Should Get Excited About the Next Wave of Architectural Design: Robotically Fabricated Buildings

Can you envision living in a modern world built by robots?

An architectural revolution is growing in the Dutch port city of Rotterdam. One innovative design team, Studio RAP, is on the path toward robotically fabricated architectural design.

“We see a lot of potential in embracing digital fabrication,” said Wessel van Beerendonk, one of the founders of the studio responsible for the first robotically fabricated building in the Netherlands.

A major step in the future has been their recent completion of the nearly 1,400-square-foot SkilledIn Office. The structure is home to an office and training area for students and entrepreneurs, located on the city’s education and technology hub shared by Albeda College, Rotterdam University and various startup firms called the Innovation Dock.

“We redefine the definition of the contemporary architect,” van Beerendonk told Dezeen. “Through digital fabrication, the architect can become a master builder, with increased control over the quality and integrity of the building in relation to the design intent.”

With the use of a plug-in program for 3D modelling—RhinoVAULT—the team was able to create an efficient wooden structure comprised of over 200 robotically milled wood panels. Together, the panels were assembled to erect a central column to support a curvaceous roof that extends over 26 feet. 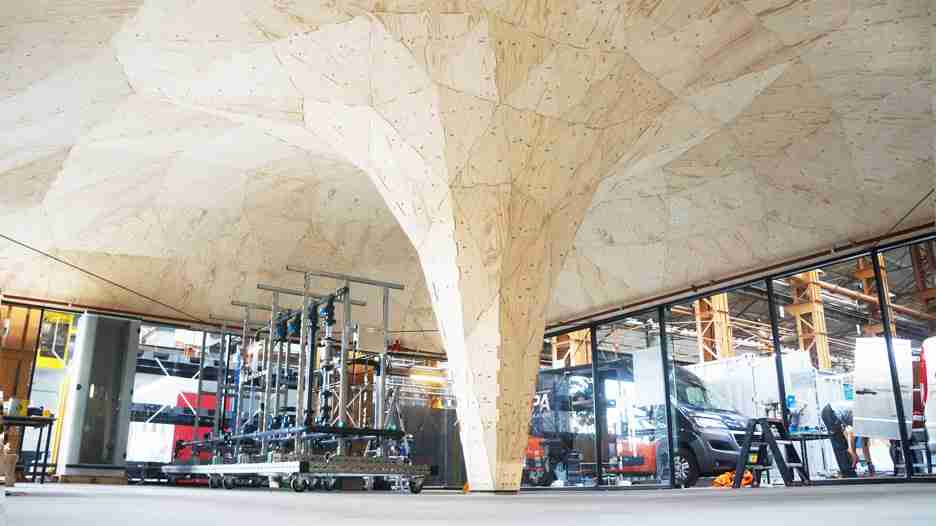 “The unique shape of the vault is distilled out of digital form-finding methods,” noted Van Beerendonk. “This optimisation [sic] results in a compression-only roof structure.”

“The vault rises up in a spectacular way from a central column that gradually blends into the roof construction in one smooth motion,” he added.

The “maker revolution” has begun with Studio RAP and it’s only a matter of time before robotic fabrication begins its ascent into bigger and more ambitious designs. The cities of the future may be completely robotically fabricated, but the technology is an immediate reality right now.