When Rachel Botsman—a thought leader on the share economy—first started postulating the idea of “collaborative consumption”, it wasn’t on trend: “coworking” or “crowdfunding” weren’t even...

Just check out collaborativeconsumption.com, Botsman’s website on the topic. There are 16 different categories people can search for companies participating in the collaborative economy; looking in the U.S. I found 44 pages of companies.

But let’s backtrack a little. I’m sure you know at least a little about the share economy: after all, the word was added to the Oxford English Dictionary this year. It’s based on the ability of individuals to borrow or rent assets owned by someone else.

“The share economy is a lens with which to look at our world,” Botsman shared in an interview with American BOSS Magazine.

The term “collaborative consumption” is a pretty good summary of where Botsman thinks things are going—and where things are for many countries’ economies. It describes the shift in consumer values from ownership to access: the reinvention of traditional market behaviors through technology, taking place in ways and on a scale not possible before the Internet. Botsman gives a great example of this in her 2010 TED Talk “The case for collaborative consumption”, about how the actual life of an electric drill is only 12 to 13 minutes per owner. Pretty silly to own a drill for a 12 to 13 minute useful life—but it becomes a great investment if you agree to rent it out to other people who need the tool.

“What you need is the hole, not the drill,” she said, further proving the access instead of ownership point.

And that is what the world is rediscovering. Moving away from hyper-consumption—the idea that you have to own everything just to say you own it—and back into a society that promotes and utilizes sharing, renting, lending, and bartering could very well be the defining economic shift of the 21st century.

So what is it going to take for us to get there? Technology has already caught up to the idea, now we need the key: trust.

“Trust between strangers is the social glue, and is the revolutionary component of the share economy,” Botsman commented. 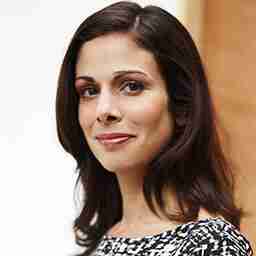 consumption is using the power of technology to build trust between strangers. Personal relationships instead of empty transactions are the way of the future, and are empowering people to make meaningful connections and rediscover a humanness that somehow was lost along the way.

The 21st century has given way to what Botsman describes as the third trust wave: trusting strangers to create people-powered marketplaces. But trust is a hard thing to come by, and sensible people would tell you to never trust a stranger. That’s where virtual identities become essential.

With each online trade made, comment left, person flagged, or badge earned, a user leaves a digital trail that makes up his or her online reputation. Integral to the online reputation is the review system, which has grown exponentially in the Internet and Web 3.0 age.

“Review systems are becoming far more sophisticated than ‘rate this experience one to five’. They are really getting into questions like ‘how did this person behave?’ ‘Would you trust them?’ ‘Would you interact with them again in the future?’ And the other interesting thing is how two-way these systems are. Hosts rate guests; guests rate hosts. Passengers rate drivers; drivers rate passengers. There’s a system of accountability,” Botsman said.

More refined ratings systems will lead to stronger, more detailed online reputations, adding steam to the already full-speed share economy movement. But where is it moving and growing next?

Although the lens is expanding its circumference fast, Botsman predicts that insurance, logistics, and health care will see the next big boost in the emerging space. If cargo ships and shipping containers have unused capacity, the share economy is looking to sell or share that capacity. Underutilized hospital equipment? Marketplaces are opening up to hospitals to allow sharing and renting of equipment off peak usage times.

This means collaborative consumption has exploded far beyond the peer-to-peer market and is making a home in the business-to-business marketplace, which bodes well for everybody. By sharing shipping containers or expensive healthcare equipment, businesses and organizations can turn more fiscal attention to reinvesting in the business or passing savings along to customers.

This doesn’t mean the peer-to-peer space has hit its peak though. Here, Botsman sees fast, continued growth in peer-to-peer lending. No matter where the growth is, or how fast it happens, one thing is for certain: collaborative consumption is here to stay, and is influencing all areas of the economy, including employment. 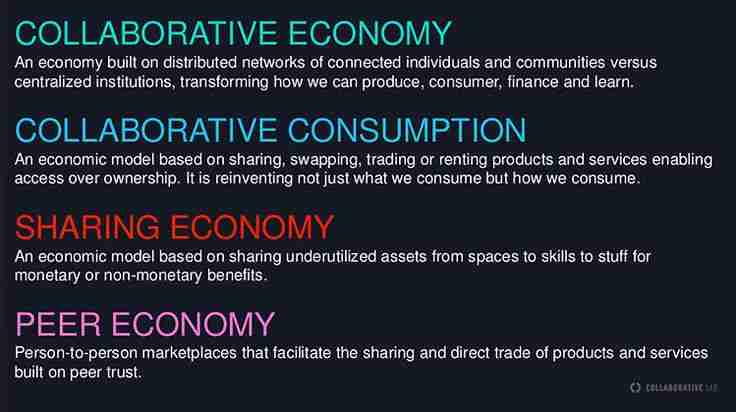 “We’re starting to see the possibilities in changing how labor coordination works because of the share economy,” Botsman shared. “It’s feeding the independent workforce in a way that wasn’t possible—or at least wasn’t happening—before. It could be one of the biggest disruptors to employment.”

In an article Rachel Botsman wrote for Fast Company, she outline these five criteria for “truly collaborative, sharing-driven companies”.