NJ Ayuk realized Africans needed energy to improve their lives, which meant that he had to find a way to work with energy companies if he wanted to transform his home continent and raise the standard of living for millions. 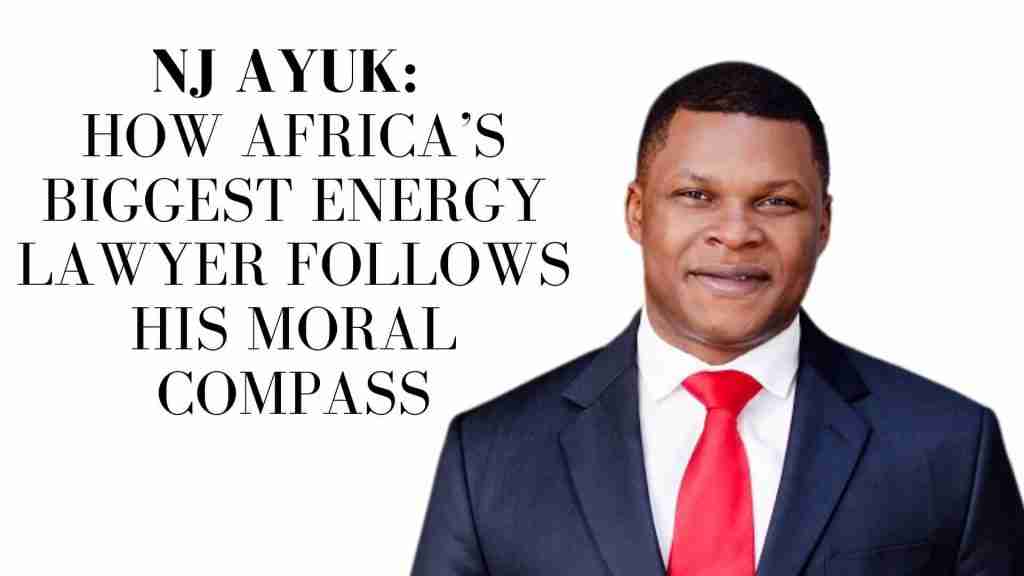 NJ Ayuk understands criticism better than most. Although he serves as chairman of the African Energy Chamber and the CEO and founder of the international firm Centurion Law Group, Ayuk grew up as a self-described “radical” whose ambitions revolved around social justice and raising up the disadvantaged.

“Most people don’t even realize the level of hate mail I get,” he shares. “But I get it. I understand it, I do. Because I was that kid that went to every protest. I understand the anger, the frustration.”

So how does a man go from being mentored by civil rights icon Dr. Ronald Walters to working with oil companies?

In NJ Ayuk’s case, it came down to doing the most good.

“I worked with the United Nations at the start of my career, thinking about human rights and gender-based violence,” he recalls. “I felt I was part of an African generation that wanted to see how we could improve the continent. But every time that I thought I want to do something with our work, I started to realize that energy was part of it.

“Unfortunately, I had no idea what energy was. If you gave me a class in energy law when I was in law school, I’d have run away. Because I went to law school in the United States, I had a rhetoric ingrained in me to be against big oil. I thought they were the problem.”

It wasn’t until he returned to Africa, full of idealism, that he discovered to achieve progress, he’d have to work with the “enemy.”

NJ Ayuk realized Africans needed energy to improve their lives, which meant that he had to find a way to work with energy companies if he wanted to transform his home continent and raise the standard of living for millions.

“In Africa, there is a silent majority that nobody talks about,” he shares. “There are 600 million people without access to electricity, 900 million without access to clean cooking technologies, most of them women. Nobody’s talking about their issues, nobody’s talking about their causes. And I felt I’m going to use the legal skills I’ve been blessed with, I’m going to put their issues on the front burner on every single politician. Whether it is a minister, a president, whether it’s a corporation — they are going to have to listen to these people. Because I know these people. They are like my grandmother, who was raised basically burning biomass. Firewood.”

The best outcome, Ayuk reasoned, was to become a new kind of lawyer, one who could serve as an advocate for disadvantaged people while in the room with big energy companies.

“There is a bigger calling to this job, especially when it comes to the issues of driving the free market. As an African, I believe in the role of free markets, limited government, individual liberty, and human rights. If I could still get a chance to continue driving these issues across Africa, then that is the better resolution and that commitment stays.” NJ Ayuk continues, “I think the voice that I carry with my work on Centurion and even the African Energy Chamber is so important. Because you bring these critical issues to a lot of important people that will traditionally just listen to ‘yes-men.’ But then they’ve got to deal with the crazy kid who keeps telling them, ‘Mr. President, you’ve got to think about these poor people.’”

Working for Generational Change in Africa

But even that’s not enough for NJ Ayuk.

“We do a lot of pro bono work at my firm, and it’s something that sometimes I don’t like to talk about,” he says. “In South Africa there are a lot of issues and across Africa, around femicide, gender-based violence. One of my jobs when I started was work on female genital mutilation issues. Our firm has taken on a lot of those cases and it’s one matter that I personally participate on. A lot of gender-based violence cases, female genital mutilation advocacy work, and doing a lot with a lot of prisoners in various prison cells that need legal representation.

“I think that kind of work is so important,” NJ Ayuk adds. “Because when you look at this kind of work, what I call innocence projects and liberty projects, there are a lot of people across Africa who are sitting in jails for various human rights abuses that do not really need to be there. To have a law firm with capabilities and abilities — and also the financial support that we can come right in and provide the kind of support they need — is really critical.”