I am emotionally invested in the future of New Orleans.

In 2006, I was fresh off working abroad for a year and I spent my freshman year in college absolutely perplexed by the aftermath of Hurricane Katrina. For over a month, gutting flood-ravaged homes in the heart of the city’s Ninth Ward, truly getting to know the kindhearted families who were evicted from the St. Bernard Public Housing Project, and spending time with children in women’s shelters without an education system in place for their children with PTSD became my new normal.

I have a taste of what Satchmo meant by what it means to miss New Orleans. When that’s where I left a quite transformed piece of my adolescent heart.

It’s mere months after Hurricane Katrina’s 10 year anniversary, and the city is taking future disasters into its own hands. The water previously kept at bay behind levees and floodwalls and pumped out to outfall canals could soon be absorbed in the future.

According to the City of New Orleans, National Disaster Resilience funds were requested to jump-start a new Resilience District. These diverse neighborhoods are primarily surrounded by water: Lake Pontchartrain, the Industrial Canal, and the New Orleans Avenue Canal, all with fairly obstructed access and visibility.

So really, Gentilly represents a “microcosm” of the greater New Orleans area. And in post-Katrina communities with a history of low- and moderate-income households and people of color, like Gentilly, great environmental risks present an empowering opportunity to create equity, reduce risk for vulnerable populations, and investments in adapting New Orleans not only to climate change, but to its natural environment. The need for resilience is just as much physical as it is social.

For the first time, New Orleans will turn to a “retain and control” stormwater strategy in one of the Crescent City’s most ambitious infrastructure projects.

But Gentilly is just one option. The Mirabeau Water Garden is another project, featuring pedestrian pathways and recreation features, all centered around a detention pond designed to temporarily hold water.

One proposal suggests removing sections of floodwalls from the Orleans Avenue Canal, opening the site up for recreation and “greater aesthetic appeal”.  The project would incorporate modifications to predetermined “floodable areas” of City Park with a weir to control the water flowing into its lagoons. Other proposed features include accessible green campuses, pedestrian bridges, stormwater storage sites, and the preservation of 27-acre Dillard Wetland, which would be cut off from New Orleans’ drainage plans and handle its own stormwater.

Backup power stations are also under consideration for the resiliency plan, featuring two small generation and distribution systems near Dillard University and University of New Orleans. A $7 million resiliency retrofit program makes up the core of the community adaptation strategy for the district. Property owners can take ownership of the strategy with upcoming incentive programs, a partnership with Deutsche Bank for private financing for homeowners, and subsidized improvements in energy-efficiency, stormwater management, and home elevation.

For example, homeowners making less than 80 percent of the area’s median income can receive up to $5,000 dedicated to adding stormwater management features to their property, covering consultation and construction costs.

“We’ve spent all this time, all these years pumping the water out. This is really changing everything we’ve done,” explained Deputy Mayor Cedric Grant, who oversees the Sewerage and Water Board and all city construction.

All flood control measures are part of New Orleans $141 million grant from the federal government, resulting from funds from a $1 billion pool of unused Hurricane Sandy recovery funds from the Department of Housing and Urban Development.

These updates will be some of the first investments in the city’s infrastructure since construction of drainage canals and pumping stations began decades ago. Very traditional methods of flood control—artificial levees and floodwalls—have been a part of New Orleans culture since colonial times. [See our infographic below.] 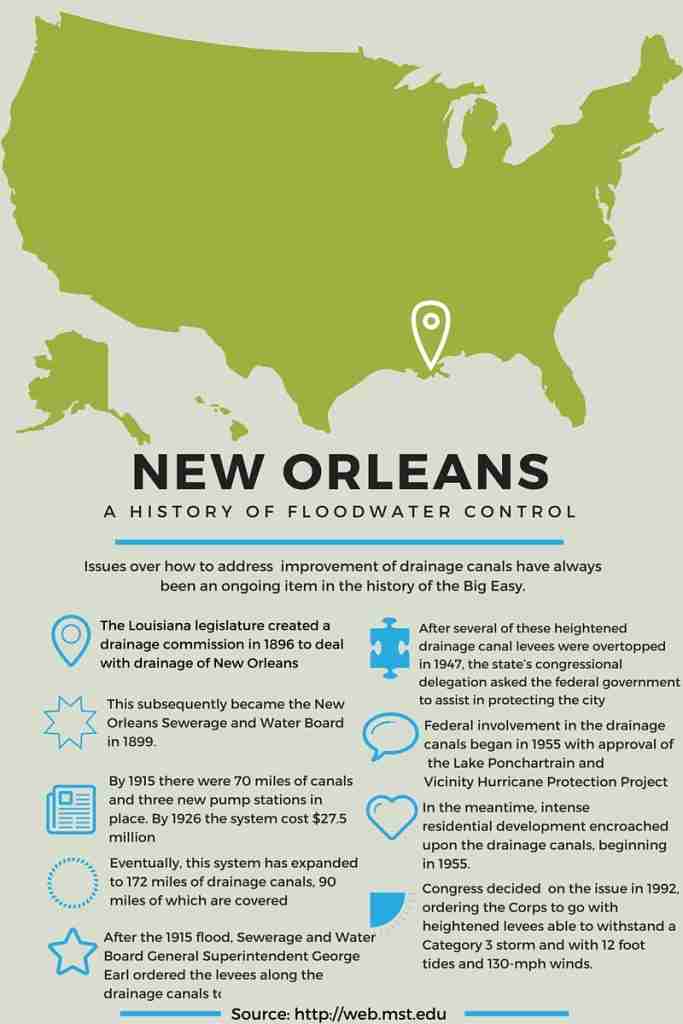 Designs began in 2015 and are anticipated to be complete by 2018, with construction ending in 2022. Full function and benefits of these projects should start sometime between 2019 and 2022.

I, for one, can’t wait to see the New Orleans Resiliency District come into its own.