The technology coming to airport security

The technology coming to airport security 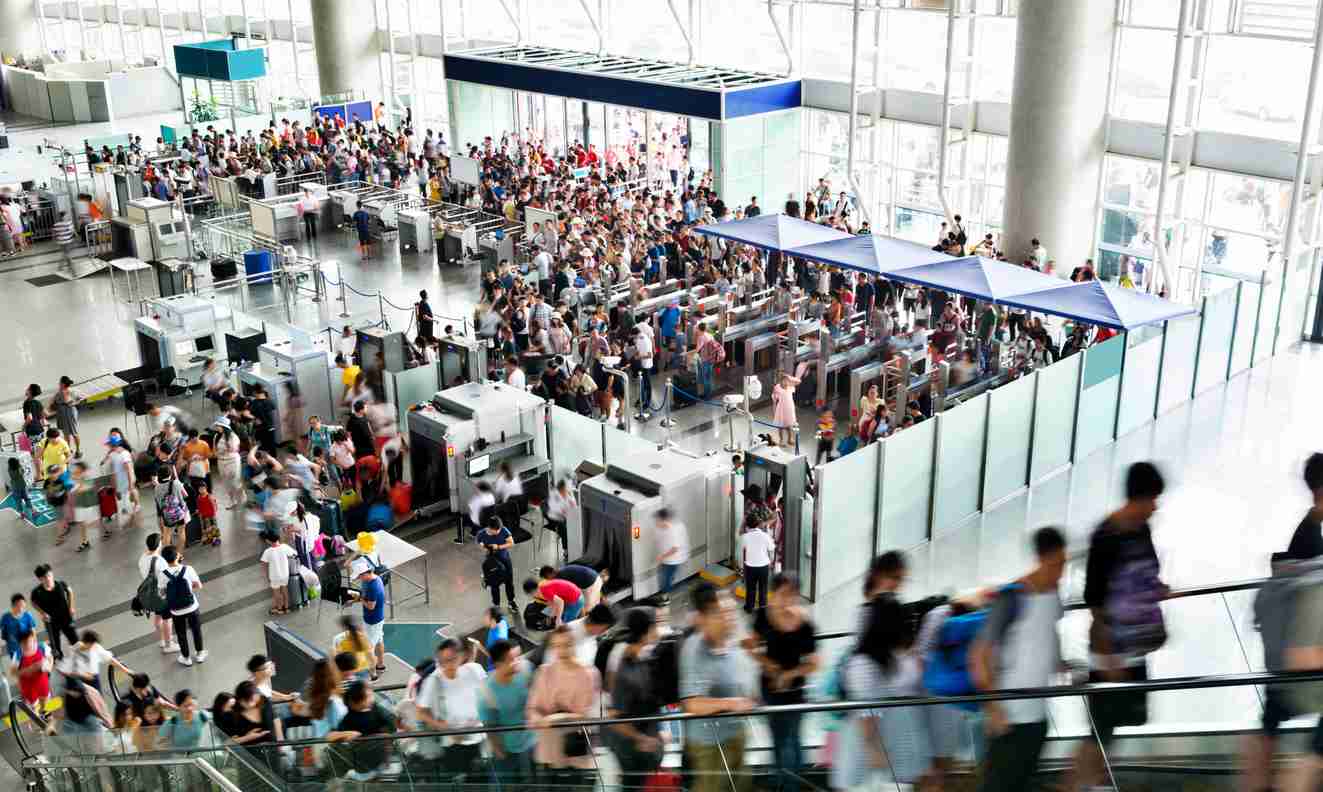 The safety and security of airports is something that the aviation industry takes very seriously – but this can lead to a situation where there are excessive waiting times for flights and a rather frustrating system. However, there are many changes in progress as technology advances look to make the whole process of using an airport be smoother and faster.

A recent report from the International Air Transport Association (IATA) revealed that passenger traffic through airports is set to double by 2035, indicating that the processes in place need to not only become safer, but also more efficient.

Here we look at nine ways that airports are using different forms of technology to improve their safety measures, ultimately becoming safer and easier to use for passengers.

One safety measure that is currently going through the trial stage is a very powerful scanner that passengers walk through which is able to recognize potential hidden threats without passengers needing to stay still or remove items of clothing. The scheme is recently trialed at Cardiff Airport in the UK and has the potential to not only improve security, but also speed up the whole process of using airports.

The scanner images body heat and utilizes computer learning in order tell the difference between something that is a threat and something that is not. And all this can be achieved without passengers having to individually stop and stand still.

12 million passengers travel by plane every day on more than 12,000 flights – and when you consider that each of these passengers has to pass through security, it shows just how much time and effort is taken up by the process. If these scanners can cut down the amount of time it takes for security and reduce queues, airports could become far more efficient.

One of the world’s most exciting technologies, blockchain has the potential to be used in airport security and safety. There has been lots of speculation about how that technology could be used and a range of ideas have been suggested. However, as the technology is still in its relative infancy, many airports aren’t quite sure which ways are going to be most effective.

A joint project between Miami International Airport, Geneva Airport, and Heathrow Airport explored how blockchain could be used to create a single source of flight data that could be utilizing across the industry – currently there is no official source of ‘truth’ that can be accessed easily by all the relevant parties.

Known as FlightChain, the project was designed so that ever changing information such as flight delays and flight paths could be delivered to all of the relevant parties. Throughout the course of the trial more than 2 million changes were processed – and while it was successful, there real system would be required to be far more sophisticated.

We are increasingly seeing incidents involving drones flying around airports, causing not only disruption but also potentially very serious security risks. There was an incident at Gatwick Airport in late 2018 which showed just how much chaos can be caused by a single drone flying near to an airport. This – the UK’s second largest airport – saw the cancellation of hundreds of flights, with more than 140,000 passengers affected. Unsurprisingly then, aviation authorities are looking at various options to deal with the issue.

There are many possibilities such as enforcing stricter regulation over the drone industry as a whole, or even forcing drones to comply with so-called “geo-fencing” where internal GPS stops the drone from entering restricted areas.

You may well already have an e-passport, as this has been one of the large-scale advances that has come to airport security in recent years. E-passports (also known as biometric passports) have been rolled out across the world, with the first actually being issued all the way back in 1998 by Malaysia. However, over the last ten years they have become far more widespread.

The passports contain a chip which can be scanned by automatic machines at airports around the world – this significantly reduces the amount of work that needs to be carried out by airport staff. Additionally, these passport chips eliminate the possibility of human error in the process, ensuring that airport security runs not only faster, but safer too.

One of the new security features that many of us will already be familiar with is that of facial recognition software. When you use e-passport machines they will scan your face to establish whether it matches that in the passport that you have presented.

However, this process is only in its infancy and there are many potential innovations coming forward such as the possibility that an individual would be able to check in, drop off their bags, and even board a flight without needing to show their passport at any time. This would be achieved through technology that scanned the passport chip and utilized facial recognition cameras throughout the airport. Individuals pass through security as their face has already been recognized by the scanners.

The US is slowly coming around to the idea of facial recognition with LAX piloting a scheme in a bid see whether the technology could feasibly be rolled across airports throughout the country. Digital security provider Gemalto partnered with the airport and the scheme ran for a month at the end of 2018.

During the scheme, passengers were not required to show their boarding pass to fly – they simply had their face scanned at the boarding gate.

Artificial intelligence (AI) has become a technology buzzword across many industries – and airport safety is no different. Many companies are utilizing AI in their technologies in the hoping of improving efficiencies, reducing time, and being more effective.

A great example of this is the Rohde & Schwarz airport scanners which were rolled out at Denver International Airport last year. These scanners use AI to detect shapes and objects in under second, without any moving parts. The role of AI in the process is to interpret the image to decide whether any of the objects that have been noticed are dangerous.

Of course, AI has a range of other potential uses in partnering with screening technologies and surveillance to create a far safer and more secure airport environment. Machine learning could allow AI to identify suspicious patterns of behavior which could then be used to inform perimeter security to deal with the issue.

Of course, in the rush to become more technologically advanced, it is also important that airports do not forget to invest in the proper physical security measures required to keep passengers and staff safe at all times.

“Every project has its own specific requirements that need consideration to achieve the safety and security of the construction personnel and the public,” says airside security and safety contractors Maltaward “the industry is required to meet compliance with the strict airport codes of practice”.

Physical security plays a role not only in offering protection to passengers but it also provides something far more important – psychological reassurance. One of the major tasks of airport security is to make passengers feel that they are safe. Large physical barriers display strength and allow passengers to feel protected.

Another important form of technology that has the potential to revolutionize the airport industry is known as terahertz screening. A British business called Thruvision is at the cutting edge of this technology which is able to work by sensing heat emissions from an individual’s body and then uses it to visualize hidden objects.

Some have suggested that this could potentially present a health risk, however Thruvision has argued that the devices do not use artificial illumination which makes them safe.

Of course, we are very aware of the security procedures surrounding our walk-on luggage as we watch bags go through scanners. But you might be less aware of the security checks on your hold luggage. Currently suitcase screening is carried out by x-ray, which can be a fairly slow procedure that is made worse by the fact that the x-ray is down to interpretation, leading to many false alarms.

But Spanish technology business SEADM is hoping to change all of this with the introduction of a system that can detect hidden explosives in bags and air cargo simply by analyzing vapor. The technology screens every piece in the cargo in one quick step which immediately determines whether there are explosives present.

This system has not yet been trialed or used in any airport as the company states it is still in the “pre-commercial stage” – but this is just an example of potential security changes that passengers are less aware of, but could make a huge difference to the time it takes to load a plane and get it ready for a flight.