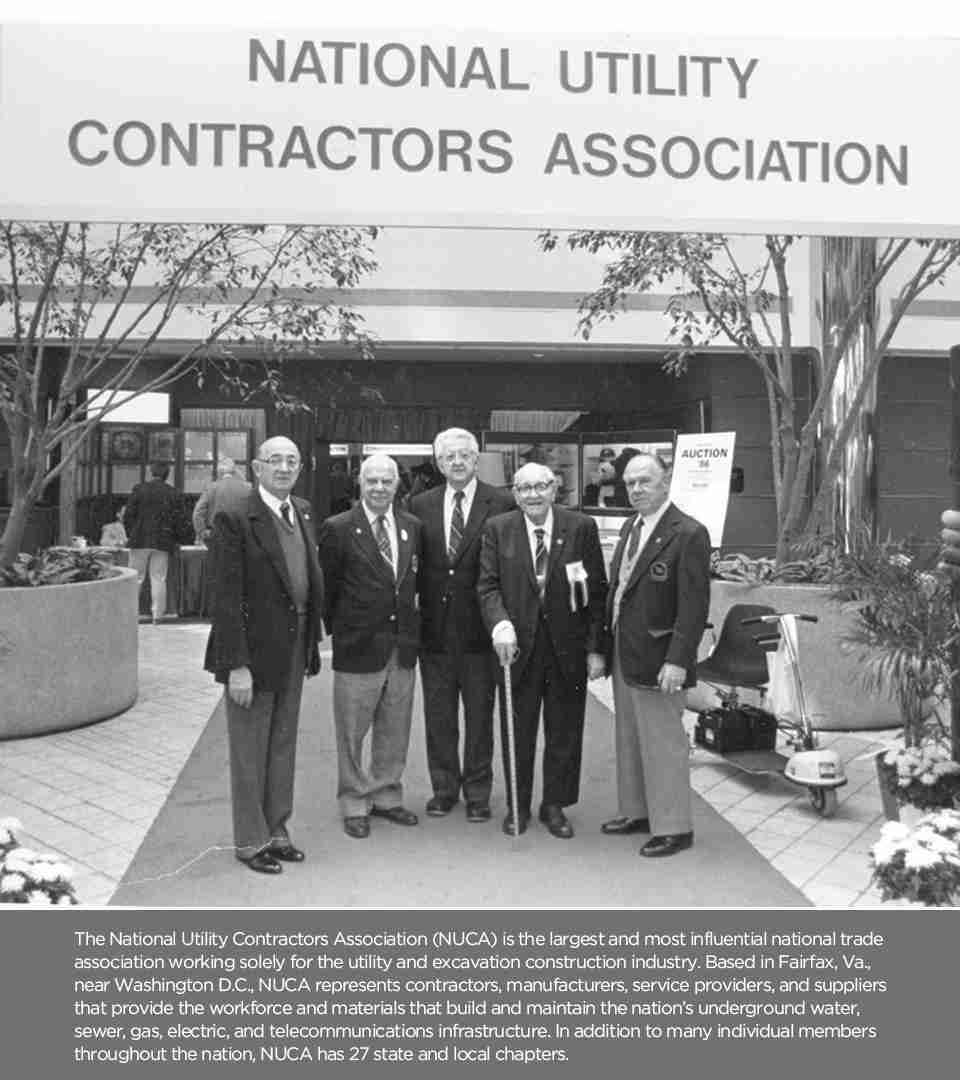 Because each contractor had to fight its own battle, they consistently faced unfavorable decisions from the national board that settled disputes and had little influence over legislation, codes, municipal ordinances, and licensing statutes.

NUCA founders believed that all of these factors posed a serious threat to utility contractors and moved into action to sign articles of incorporation. With little cash, a lot of determination, and a sincere agenda, these pioneering volunteers founded what has become the nation’s largest and most influential organization in the business world of utility construction.

NUCA’s infancy was modest, but our founders quickly rallied support from other contractors determined to establish a national organization to protect the interests of union contractors. 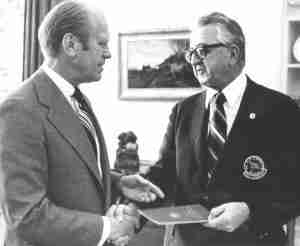 By 1970 NUCA began gaining strength, respect, and recognition among industry peers and membership grew rapidly. In 1970 NUCA had 200 members. By 1973, the rolls hit 1,200. Members hit a significant milestone when, after a five-year battle, utility contractors were finally given the recognition they deserved when they received their own classification on the U.S. Census. NUCA held its first annual meeting in 1970; in 1972, NUCA held its first equipment exhibit.

NUCA’s history includes important contributions to our industry, our companies, our employees, and the country. Naturally, we have also experienced more than a few anxious moments along the way, but NUCA’s loyal core membership remained strong.

In 2014 NUCA celebrated its 50th anniversary. NUCA’s longevity is a tribute to the hundreds of men and women who have held leadership positions and made significant contributions to assure NUCA and its mission and efforts remained relevant. Most importantly, however, is are the four visionary men who founded NUCA just over 50 years ago: D.A. Foster, Antonio Marinelli, Pat Marinelli, and Joe Stone.

NUCA is a thriving member-run organization. Membership is comprised of companies who are primarily represented by owners or other c-level managers. NUCA has 16 very active committees, and members bring their knowledge, experience, and expertise to the committee table where important industry issues are discussed and decisions are made about what NUCA priorities and actions to see them to fruition.

NUCA members meet at NUCA’s three annual meetings: Convention, Fall Leadership Conference, and Spring Washington Summit. Meetings also held through conference calls when required. Committees are open to all members and they are encouraged to attend to offer their input, share information, or express their concerns. NUCA is run by an Executive Committee and Board of Directors with input from 16 standing committees, each with clear goals and objectives:

Representation on Capitol Hill and the Regulatory Agencies

Advocacy in Washington D.C., is probably the most important benefit NUCA provides to its membership. The very foundation of NUCA’s agenda is advocating for a beneficial environment for utility and excavation contractors through legislation and regulation.

Our leverage lies within our membership. Politics is a contact sport and NUCA is the quarterback for utility and excavation contracting priorities. An active, motivated, and informed membership is critical to effective advocacy, and NUCA’s Government Affairs staff focuses on ensuring members have all the ammunition they need to communicate with their elected officials. 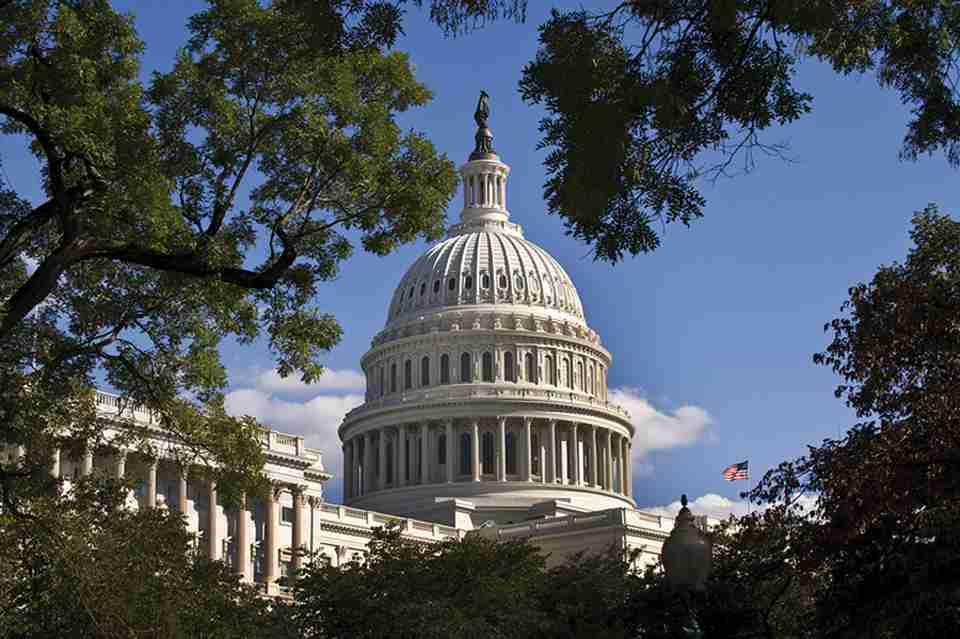 Speaking with one collective voice, NUCA’s Government Affairs lobbies Congress and the Executive Branch to shape laws and regulations to benefit contractors’ businesses. We advocate for greater funding for infrastructure projects at all levels of government and for mechanisms that make these funds easier for communities and states to utilize.

We advocate for common-sense regulations that promote safety and best practices without infringing on a business’s ability to operate and be successful. Above all, we advocate the benefits of a strong, stable, and reliable infrastructure system by highlighting the far-reaching implications of continued neglect of America’s deteriorating infrastructure.

NUCA’s Government Relations in Washington always advocates in the best interest of the utility and excavation contractors across the country. NUCA’s Strategic Advocacy Fund (STRAF) pays for legal, regulatory, and legislative projects that initiate or support precedent-setting legal activities where the questions pose significant threats or opportunities for the national industry.

Legislative Alerts are periodically sent to members when the full force of NUCA membership is needed to influence votes on important legislation in Congress. Political Insiders emails are sent periodically and offer brief and timely updates cover what is most pressing in Congress and/or request member action when critical legislation in moving through Congress.

The annual Washington Summit is NUCA’s premier member advocacy event. The three-day conference gives members a view inside NUCA’s Washington operations. Members hear from some of Washington’s most influential lawmakers, rising stars, analysts, and agency professionals about the hottest and most relevant topics facing the infrastructure, construction, and business communities. Members also spend a day meeting with their Representatives and Senators to personally lobby NUCA priorities, sharing stories about what they see when they dig up pipes.

Members can get in-depth analysis about important and timely issues and get involved in influencing the outcome of important legislation and regulations. The Advocacy Center has all the tools members need to learn more about their elected officials. The center can also assist members in contacting elected representatives, assuring that their voices are heard. Find our Advocacy center on our website.

Working in conjunction with NUCA’s advocacy initiatives, NUCA/PAC is the only political action committee dedicated to ensuring that only the most pro-infrastructure and pro-business candidates are elected to Congress. NUCA/PAC is the nonpartisan political arm of NUCA advocacy. Funds from members’ voluntary contributions are utilized to contribute to the campaigns of candidates for Congress who exhibit strong support for infrastructure and business growth.

NUCA’s Clean Water Council has been an effective coalition lobbying force for 25 years and is nationally known by virtue of its congressional testimony, hundreds of congressional meetings, letters to Capitol Hill, and published studies. The coalition is represented by more than 45 national organizations representing underground construction contractors, design professionals, manufacturers and suppliers, labor unions, and other companies, associations, and individuals committed to ensuring a high quality of life through sound environmental infrastructure.

NUCA is the National Utility Contractors Association — the leading trade association working solely for the utility construction and excavation industry in the United States.

Founded in 1964, NUCA is the driving force for improving conditions in the utility construction and excavation industry, for both open-cut and trenchless contractors.

MEMBERSHIP:  Your company can reap the benefits of NUCA membership.  Learn more here.

CHAPTERS:   NUCA Chapters thrive across the USA at the state/regional levels.  Contact your local Chapter for membership information.  Search the NUCA Chapter Directory.

ANNUAL NUCA CONVENTION: March 10-14, 2016 El Conquistador Resort Fajardo, Puerto Rico, USA.  No passport required. This is a chance to learn, connect, and discover the benefits of NUCA in an amazing, tropical setting.