Will Metal Powder be the Fuel of the Future?

As the energy sector continues its shift toward renewable sources, more avenues are being explored as potential alternatives.

According to Jeffrey Bergthorson, Professor at McGill University, despite solar and wind power’s progress, it’s important to consider that these are not viable alternatives for all oil-consuming processes, such as transportation and global energy trade.

“Biofuels can be part of the solution, but won’t be able to satisfy all the demand; hydrogen requires big, heavy fuel tanks and is explosive, and batteries are too bulky and don’t store enough energy for many applications,” said Bergthorson.

Surprisingly, Bergthorson is proposing the use of metal powder. “Using metal powders as recyclable fuels that store clean primary energy for later use is a very promising alternative solution,” he added.

An Unlikely Alternative
For the past 20 years, Bergthorson and other McGill researchers have studied how metal powder—like iron, for example—can be used as a fossil fuel alternative and produce zero emissions.

In that time, they’ve not only learned that metal powder is capable of producing more energy than gasoline, but that when processed, metal powder releases environmentally benign iron oxide—or rust.

Additionally, the exhaust can be collected and recycled back into iron, effectively creating a closed loop system.

This concept is not new. It has actually been used for decades in fireworks, rocket fuel, and thermite for cutting through material like steel rails. The McGill team plans to bring this concept into a practical power source for everyday use.

“We are very interested in this technology because it opens the door to new propulsion systems that can be used in space and on earth,” said McGill team-member and Chairman of Metallurgy Europe, David Jarvis.

Taking to Space
Despite a decades-old concept, the team wanted further insight into how metals burn.

While on the ground, metal powder settles too quickly and gives way for hot combustion products to rise and disrupt the experiments. For this reason, the team to took to the skies for ideal results. The state of weightlessness in space provided the right conditions to study the metal’s reaction.

“We have to expand our horizons, our vision of what a fuel is, and what are the possibilities. And when we look big enough, I think we find that metals are going to be the solution,” said  Bergthorson. “I want a renewable, energy-rich future and not an energy-poor future.”

How it Works
According to the McGill team, metal powder—just like petroleum—is not a primary energy source, but a means of storage for energy sources, such as hydroelectric and nuclear power. This storage medium would then be used to refine metals into a flammable form.

The metal powder would be used for external combustion or heat engines, such as steam engines. 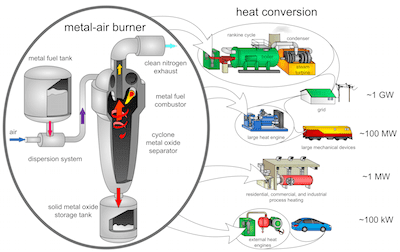 Making the Feasible Into Reality
Despite the McGill team—among others—having demonstrated that metal fuels used with heat engines is feasible, it remains an unprecedented practice.

The next and final step is to put the lab findings to task: creating “a prototype burner and couple it to a heat engine,” explained Bergthorson.

While this experiment is a clear sign of the future of metal fuel, there must first be technology available to bring metal powder fuel into fruition. Jarvis broke it down:

“The shift away from fossil fuels for vehicle propulsion is a clear trend for the future. While not perfected and commercialized today, the use of low-cost metallic fuels, like iron powder, is a worthy alternative to petrol and diesel fuels. If we can demonstrate, for the first time, an iron-fueled engine with almost zero CO2 emissions, we believe this would then trigger even more innovation and cost reduction in the near future.”