In Reno, Nevada, Tesla is making progress on its 5.5 million-square-foot facility that will produce power storage systems and vehicle batteries. The company’s production line made manufacturing industry news when it was well ahead of schedule last year, and expects to begin battery cell production in 2016. The Gigafactory should reach full production by 2020.

The U.S. is closing in on China’s number 1 spot as most competitive manufacturing nation… 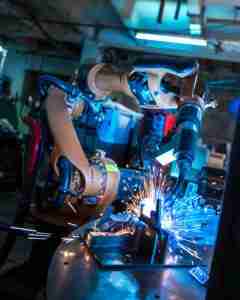 U.S. manufacturers are investing in technologies: predictive analytics, the Internet of Things (IoT), smart factories, and advanced materials that add to future competitiveness.

While China has upped investments in R&D, its economy slowed and, in turn, manufacturing activity is diminished. For example, China’s auto industry has capacity utilization of 70% versus nearly 100% in 2009. China also is seeing a rise in labor costs, up five-fold since 2005.

The U.S. is currently second behind China in competitiveness. To learn more, the entire survey is available online.


During the annual White House Science Fair, our country’s youngest innovators got together for an exhibition of creativity, engineering, and scientific feats… much to the delight of the President, who began the fair back in 2010.

POTUS toured displays, asked students questions, and got hands-on with some of the STEM-oriented demonstrations. A few examples of what the young inventors were working on included the detection and treatment of renal fibrosis, the improvement of undersea cement seals in efforts to prevent offshore oil wells’ leaks, and even the development of a device to tap into ocean currents to generate energy.

“You remind us that together through science we can tackle some of the biggest challenges we face. You are sharing in this essential spirit of discovery that America is built on,” touted President Obama.

This event is part of an initiative to improve education in science and math, with $1 billion in private investment as part of a White House campaign. The nation has reached over half of the Educate to Innovate goal of preparing 100,000 new math and science teachers before 2021.

Last month, Toyota Motor Corp just hired the entire 16-person team at Jaybridge Robotics artificial intelligence software firm to join the Toyota Research Institute. The institute is a Silicon Valley-based lab where the development of self-driving cars is the goal. The robotics startup has been around for seven years, primarily focusing on industrial applications for AI software in agriculture and mining fields.

In a statement, Jaybridge CEO Jeremy Brown expressed his team’s anticipation for “going after the big one: helping to reduce the nearly 1.25 million traffic fatalities each year, worldwide.”