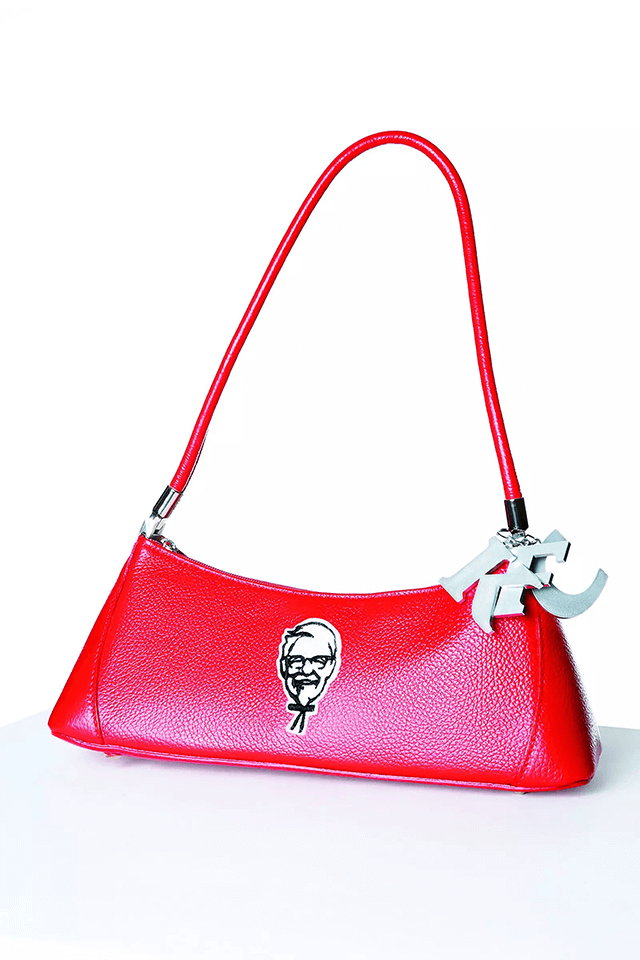 What comes to mind when you think of KFC? Crispy, golden fried chicken? Perhaps a juicy chicken breast sandwich? Or even that sandwich that had two chicken patties instead of bread (it’s called the Double Down, and it’s back). Way down the list would be $300 Italian leather handbags crafted by Savile Row artisans with a picture of Colonel Sanders plastered on them. But such a thing exists, and there’s a waitlist to get one. The Wrapuette bag is a play on the popular Baguette bag high-end fashion retailers used to sell. It’s also a symbol of the intersection of luxury, food, and drink. Or, as KFC called it, “the intersection of chic and chicken, in a fashion moment that no one saw coming.” Not content to stay in their traditional lanes, luxury brands and food & drink are teaming up to expand into new markets. 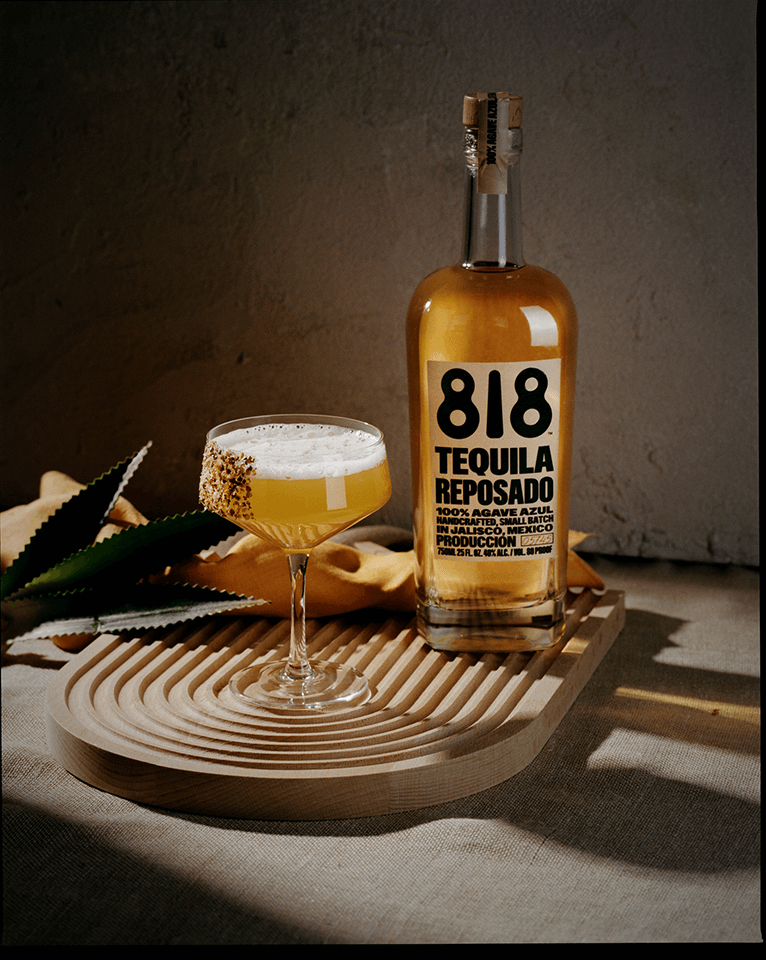 Celebrities have long endorsed products, but traditionally it has been other people’s products. Looking for ways to expand their personal brands and revenue streams, they’ve been cutting out the middleman and launching their own food & drink lines. There’s no better space to do this than the roughly $2 trillion global alcoholic beverage industry.

“Celebrities today have so much media power and a platform to communicate more about who and what they are,” said Mark Haas, CEO and president of The Helmsman Group. “Historically, celebrities would have entered licensing deals for royalties. Alcohol was always taboo, and many of these royalty agreements used to contain morality clauses. Today, alcohol doesn’t seem to be the forbidden territory it once was. Celebrities are free to engage in marketing and spirits (are) more lucrative equity territory.”

Society sees these celebrities as the epitome of class, sophistication, and cool. Combine that with the fact they have a lot of money, and it’s natural for them to want to exude luxury in their personal branding. Thus, you have the likes of Kendall Jenner launching a tequila and Ryan Reynolds a gin. When high-end brands like Cristal objected to rappers making expensive Champagne a staple of their songs and videos, Jay-Z and others turned around and started their own labels. Even Danny DeVito has his own limoncello. By making themselves synonymous with the high-end booze they sell, these celebrities come to embody luxury food and drink. 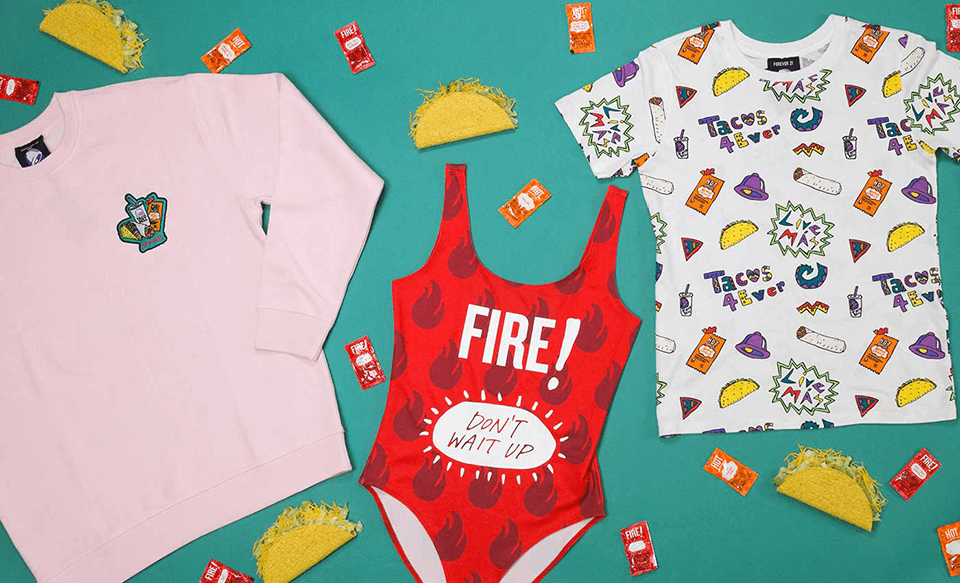 Rather than launch their own line, several well-established brands are collaborating with well-known food and drink brands on specialty products that give both names a boost in the public eye. In the U.K., bakery chain Greggs, famed for its sausage roll, partnered with fast-fashion brand Primark on 11 clothing items featuring the Greggs logo. They sold out within hours in Newcastle.

“I am just going to get everything. I want all the clothes because I am obsessed with Greggs. It’s actually a problem!” 18-year-old Jenny Bennett told ITV. “I love a sausage, bean, and cheese melt.”

A bit up the luxury food and drink scale, Coach and New York City staple Zabar’s teamed up on a collection of bagel-emblazoned clothes and bags. It, too, sold out quickly. Perhaps the most striking collab was the Taco Bell x Forever 21 collection featuring bodysuits designed to look like Taco Bell sauce packets and hoodies adorned with the Taco Bell logo. As part of its #Heineken100 program, the brewery commissioned hoodies, jackets, and T-shirts from streetwear brand A Bathing Ape. The Dunkin’ collaboration with e.l.f. cosmetics featured donut-shaped face sponges and “glazed for days” lip gloss.

In a larger venture befitting its global status, Coca-Cola has launched retail stores featuring branded clothing and showcasing collaborations with the likes of Soho Grit, Herschel, and A Bathing Ape, though its London flagship store is set to close this month after less than a year. 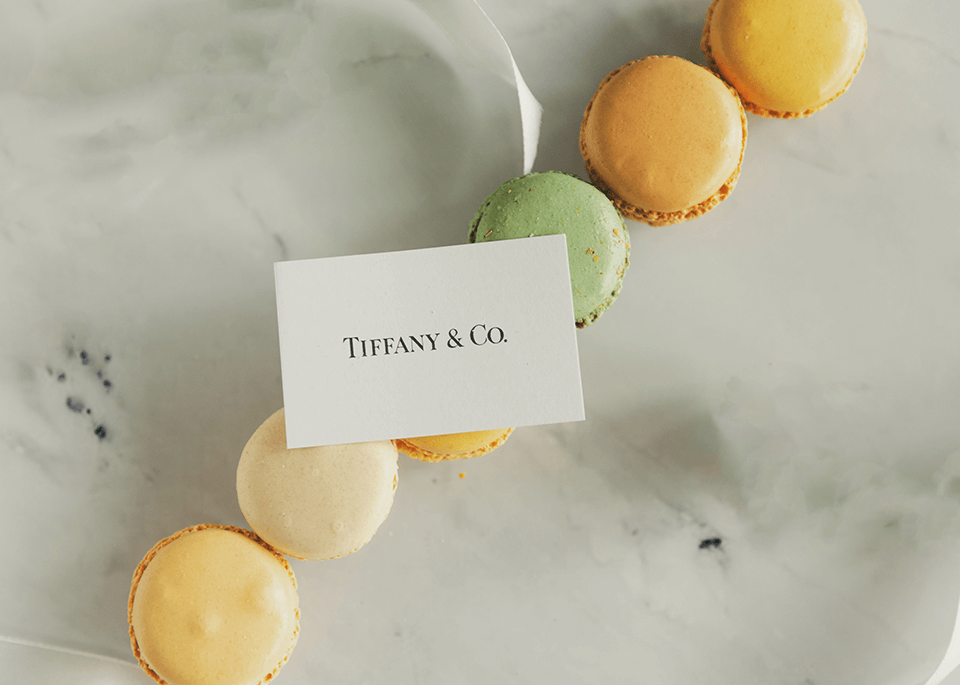 Dispensing with the need for another brand, some icons of their industries have simply opened their own restaurants to supply their own luxury food and drink. Looking to capitalize on China’s $100 billion tea market, Tiffany & Co launched its Blue Box Café in Shanghai and Cartier opened a teahouse in Chengdu to accompany its reopened flagship store. Dior and Ralph Lauren are making similar moves in China.

“With a slowing economy, and massive layoff from high-growth sectors flooding the news headlines today, many young professionals are shifting their consumption habits from luxury to food and drink. They are looking for small, concrete happiness,” fashion reporter Qirui Chen told Jing Daily.

Dior already has a signature restaurant at its 30 Montaigne store in Paris, where Jacquemus operates its Café Citron. On the French Riviera, Louis Vuitton has a restaurant featuring African-Asian-French fusion gastronomy by Michelin-starred chef Mory Sacko. You can find Gucci Osteria locations in Florence, Beverly Hills, Tokyo, and Seoul.

“The movement in luxury brands developing experiential extensions, particularly in the hospitality sector, has been a response to shifting consumer priorities. … This is a longer-term shift in consumer-to-brand relationships and the concept of value. Asia is poised to move faster in the delivery of this change, offering an opportunity to lead the future of luxury,” Georgia Fendley, founder and creative director of branding agency Construct, told the South China Morning Post.

To that end, luxury watchmaker Breitling debuted its first restaurant in Seoul this year. Brands figure we all need to eat, so why not put their stamp on luxury food and drink?