Kfir Gavrieli: Running a business can also be a mitzvah

Kfir Gavrieli is an Israeli native who grew up in Southern California. Raised by an entrepreneur father with a family business that sells plastics, metals, and sign supplies, Kfir was always interested in continuing in his father’s footsteps. In preparation to take over his family’s business, he studied materials science and engineering at Stanford University, earning both bachelor’s and master’s degrees with an emphasis in retail and social entrepreneurship. 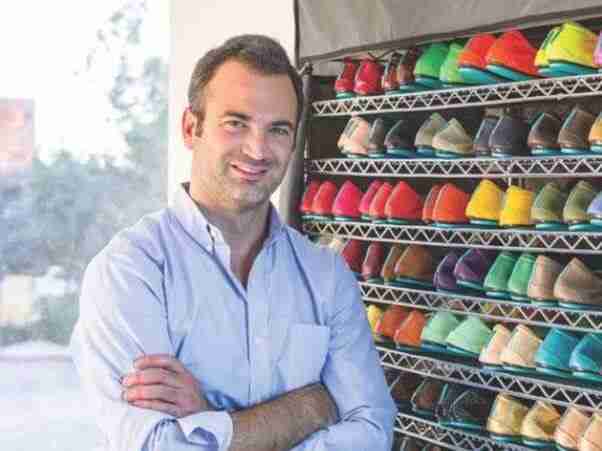 In an unlikely twist of fate, Kfir did not end up running his family’s vinyl and acrylic business but instead wound up selling women’s shoes, specifically the world’s most portable —and possibly most comfortable—ballet flats. Kfir’s brand is called “Tieks,” the Hebrew word for “bag,” because the flats are designed to be foldable and fit easily inside a purse or handbag.

In a recent interview published in eJewishPhilanthropy, Kfir describes his path as an entrepreneur:  “I grew up in a family business,” he noted, “but I was in business school at Stanford, and if your visions of what you think you will do don’t change when you’re at the heart of Silicon Valley, then you might not be getting the most out of the experience. I ended up living with people who were on the absolute cutting-edge of the retail industry. What I learned wasn’t in the classroom, it was some guys selling pants out of the garage.”

This out-of-the-box way of thinking about business led him to develop the innovative Tieks brand. “We got to be pioneers and create changes in the industry,” he explains. “The first thing we did differently was the design of the shoe—that it’s foldable. The original idea was a foldable flip-flop, and over time it evolved to the product we sell today. We thought about doing a foldable sneaker and a foldable sandal, and we decided the ballet slipper would be the best product.”

Kfir spent a year living in China to gain first-hand knowledge of the materials and prototypes he would work with. Following this, he then focused on developing a direct-to-consumer channel that could launch and become successful online. “Bonobos was the first direct-to-consumer fashion company,” he points out, “and that was very inspiring. Now, when you’re a new brand, it’s a no-brainer to launch online. We had to create innovative ways to bring people to our website. We did lots of testing on various social media platforms.”

Kfir describes his experience of learning how e-commerce works as a “fun thing to be a part of.” By getting into the e-commerce industry early on, he learned to imagine and understand the possibilities that the industry provided, while also breaking through established barriers.

“Our goal was to get our product into the hands of people. We came to want a direct relationship with customers, instead of one mediated by department stores and boutiques and specialty stores. We got direct feedback from customers, so we developed a customer service department. In the early days, we were thinking more about what it would take to survive, and over time we discovered all these benefits.”

While Tieks flats have earned a global reputation and following since the brand was launched in 2010, Kfir has also focused on using his brand to make a positive social impact in the world by becoming involved with Kiva, a micro-lending platform that provides micro-loans of $5,000 to women and girls in impoverished communities around the world.

In addition to his endeavors in micro-lending, Kfir also took up mask-making to provide essential PPE for frontline health workers at the onset of the COVID-19 pandemic in 2020. The company initially began sewing masks then launched a remarkably successful online campaign that incentivized their followers and customers to sew masks as well, providing gift cards for Tieks flats to reward them for their efforts. The #SewTogether campaign created such an online buzz that it firmly strengthened the Tieks brand as a community mover and shaker while donating over a million masks to health workers. “We’re more than just a shoe company,” Kfir commented. “Look at the conversations that happen on our Facebook page. Our customers connect on the deepest level.”

Crediting his Jewish upbringing and his family’s engagement in community giving through involvement with their synagogue and local area, Kfir affirms that building community service into his business plan came about naturally. “It was just the idea of having meaning in what we do, more than just the business. Through business, you can have impact rather than just make money and give it away later in life. Through commerce, you can create change.” As the business grew, so did Kfir’s enthusiasm for providing community benefit as a natural part of his business model.  “This model of integrating social impact with the business is newer. It’s a reflection of a bigger trend we’re seeing and at some point, it will become the norm.”

The idea of micro-lending inspired Kfir as an alternative to the more traditional model of giving wherein the company gives away a product for every purchase made. “[That model] was cost-prohibitive for us, because ours is a luxury product,” he explained. “The idea is that instead of giving someone a pair of shoes, we decided it’s much more impactful to instead enable these women to buy their own shoes, and make their own money, and buy whatever they want.”

Having befriended the founder of Kiva when they attended business school together, Kfir was inspired by Kiva’s platform where lenders can provide funding for people who have no access to capital but have great ideas for small businesses. “It’s amazing what people can do with access to capital,” he stresses. “We just swipe a credit card; we don’t think about it. But there are female entrepreneurs in Africa who would love to buy a coffee machine for $30 and start a coffee shop with it. And that’s really what these microloans make possible. So far, we have loaned $10 million on Kiva. That’s meaningful to us.”

The #SewTogether initiative was also born out of a need to provide both fulfillment of a need as well as to reward individual initiative on the part of his company’s followers and fans. “When the pandemic hit, our initial thought was to sew masks ourselves,” he affirms. But once the company’s followers began to express interest in contributing to the brand’s efforts, the idea for the campaign just came together as if by magic. “Our customers wanted to help sewing as soon as we started. We realized that we could teach them how to do it, and empower people who had a deep desire to help. So we facilitated; we gave instructions for mask designs and how to sew them. We try to not be the saviors ourselves, but pay attention and listen to what they themselves want to do.” The key question Kfir seems to always be asking himself and his corporate team is “How, as a corporate citizen, can we play a role?”

Kfir is also committed to helping other companies discover how they can fulfill their responsibility as corporate citizens. “It’s a little delicate for companies, because they can generate opposition if they take political positions,” he advises. “But there is so much to do that goes beyond politics. Everybody should be able to agree there are roles for companies to play, and that they have a responsibility.”

That responsibility has come to define the Tieks brand and is central to the brand’s global success.