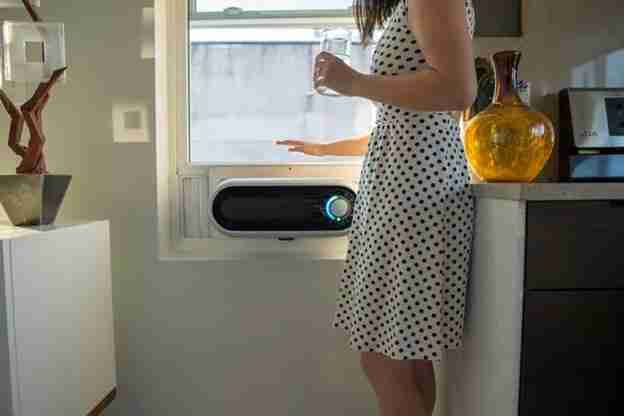 When you’ve got one of the “coolest” products in your market sector, demand can often outweigh supply — or more specifically, the supply chain. No one knows the reality of this paradox better than Kapsul Air co-founder and CEO Kurt Swanson.

“The Kapsul AC unit goes beyond attractive and enters the realm of futuristic high-tech home decor. If I saw this in someone’s apartment, at first glance I probably would not know what it was,” gushed Refinery 29 product reviewer Alexandra Polk. “Now, we know it as ‘the future of smart air.’

“These units … can be installed safely within minutes by just one person thanks to its ergonomic, easy-to-pick-up handles and slender 7-inch height,” Polk further enthused. “You can also easily control a Kapsul from your phone, receive stats on air humidity, and control multiple devices at once to efficiently cool larger spaces. Once you’re done with it for the summer, unlike most units, you can easily pull it out of your window and pop it under the bed until next year.”

With a steady stream of rave reviews like that one, it’s small wonder consumers are eager to get their hands on the Kapsul Air W5. As soon as stock becomes available, it sells out almost immediately, leaving many potential buyers out in the cold — or in this case, the warm.

Due to circumstances beyond anyone’s control — i.e., the COVID-19 pandemic — meeting demand has been an ongoing challenge for Kapsul since its inception, but it’s an issue Swanson chooses to tackle head-on.

Understanding the Impact of the Supply Chain Breakdown

Currently, the Kapsul Air W5 clocks in at the high end of the price point in its product sector. However, unlike the Dyson vacuum or a Lexus automobile, Kapsul Air wasn’t conceived with the luxury market in mind.

“We built the product we wanted for ourselves, with the technologies that inspired us, and we created a price point around a reasonable margin,” Swanson explains. “However, the costs of getting all that cool stuff, and delivering it to customers has gone up dramatically since we launched the product in 2020.”

Indeed, the supply chain crash and burn that’s left the technology sector reeling may take years to level out. “It’s been crazy because I knew a lot about the supply chain pre-COVID,” Swanson says. “We started Kapsul working with a supply chain that existed in 2019 that simply doesn’t exist anymore.”

When Kapsul officially launched in 2020, Swanson admits there was great concern over whether or not it was going to happen. “After the initial lockdown in China, we didn’t know if we were going to get it into market or not, but amazingly, while we didn’t end up with as many units as we’d hoped for, we did get it to market.”

As the pandemic and subsequent lockdowns wore on, supply chain setbacks continued to escalate. For context, Swanson explains that every window air conditioner, even if assembled in America, contains critical component parts manufactured in China. Unlike larger veteran competitors, as an emerging business, Kaspul couldn’t fall back on established billion-dollar factories and established inventory. “We had to go where the components were being made,” Swanson says.

“Kapsul is living in the long shadow of industry trends in the 1990s and early 2000s,” he explains. “Large HVAC manufacturers of room air conditioners moved all their production to China for costs savings, and after 20 years the entire global industry has been addressed by manufacturers throughout the supply chain in China, which is the one place in the world where you can get experienced technical labor, compressors, heat exchangers, plastics, metal, and all the other parts needed to build an AC within a one-hour drive.”

Swanson was actually in China at the end of January 2020, readying production for the first batch of Kapsul units. He’d planned to go home for the traditional two-week Chinese New Year celebration break and then jump right back into the thick of things. “Obviously,” he says, “that didn’t happen.”

Faced with staggering delays, Swanson says the company was forced to shift gears. “We’ve had to rethink how we do everything to get these products to market. When we tried to reorder components, we were told it was going to take 70 weeks. When we originally ordered, the turnaround was eight weeks. So that really threw a wrench into the mix.”

Kapsul has learned the hard way, Swanson says, that companies can no longer predict things that were once pretty much ironclad. “It used to be when you bought a shipping container, it was maybe $3,000 to $5,000 to get it to the United States, and it took ‘X’ amount of time,” he says. “That just went out the window.”

Kapsul is definitely feeling the pinch; however, looking at the broader manufacturing picture, Swanson knows the brand is not alone. “I think everyone in industry is having to learn on the fly — and it’s not just small businesses,” he says. “I read an article that reported the CEO of GM was talking about how in Q4, they’d only delivered 26 electric vehicles for the whole quarter because they couldn’t get enough critical components.”

Again, unlike larger companies, as a smaller, newer firm, bouncing back has been even harder. “We’ve learned to expect the unexpected in this business, particularly at our scale, where every person is trying to do the job of three or four people, because we’re just a handful of people,” says Swanson.

Scaling back the business model has resulted in having to make some difficult choices. “Laying off team members and the personal pain that causes to people who’ve done nothing but amazing work in the face of crazy adversity is rough,” he admits. “Disappointing backers is tough too. These are the folks who made the project possible in the first place, and I hate letting them down.”

The Future of Kapsul Air: Gearing Up for a Grander Scale

Looking to the future, Swanson says Kapsul is resolute in achieving goals that include making it through 2022 with as many PCBs as possible for 2023. “The key is just availability of inventory.”

Currently, Kapsul Air has only one sales channel. Swanson notes that while there’s been a great deal of retail interest over the years, they don’t have the scale to support it just yet. “When a big-box retailer comes to us and says we want to give you an order for 10,000 pieces, it’s just not feasible,” he explains. “The big guys, they’ll make 50,000 pieces a year. That’s the scale we’re hoping to achieve, and at that end, you can support big-box retail. We’re going to get there — but right now, we only have enough inventory to sell through our website.”

Getting Kapsul to market has been a much longer and more demanding process than Swanson could ever have anticipated, but he believes you can either succumb to the pressure or rise to meet the challenge. “If you’re going to be an entrepreneur, you got to be tough,” he says, adding wryly, “and if you’re going to be a hardware entrepreneur, you’ve got to be a little crazy too, because there are easier business models to succeed in.”

Even so, Swanson reflects there’s a lot to be thankful for. “With all the difficulties going on — and there are so many things — I’m grateful that everyone in my life has been healthy,” he says. “I know there’s been a lot of tragedy around the world, but strictly from a business perspective, it’s been extremely challenging to continue to move forward, to fulfill our promises, and to turn Kapsul Air into the brand we all know it can be.”