How Alex Pissios Brought Film and TV Back to Chicago

If Alex Pissios’ life were made into a streaming video series or film, it would likely be a Horatio Alger myth mashup of Robert Altman...

If Alex Pissios’ life were made into a streaming video series or film, it would likely be a Horatio Alger myth mashup of Robert Altman and Frank Capra, with a little touch of Quentin Tarantino and My Big Fat Greek Wedding tossed in — and a heavy dollop of legendary TV producer Dick Wolf on the side. 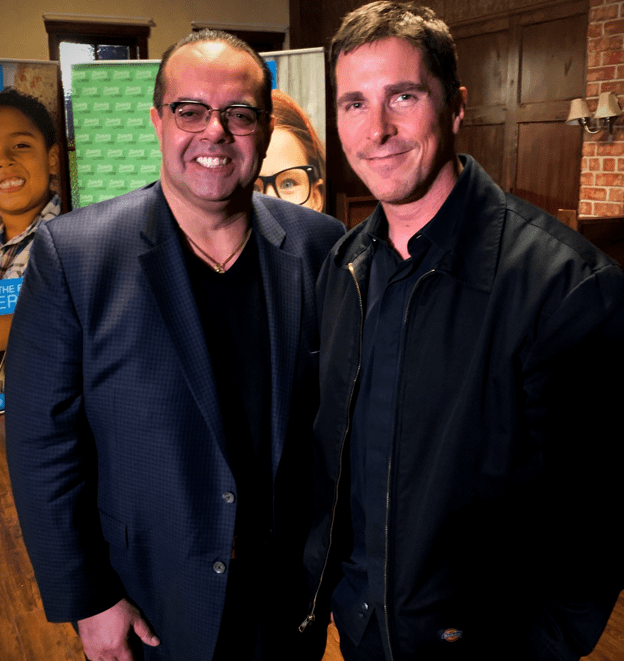 Alex Pissios, billionaire film studio magnate, celebrates the kickoff of a Chicago-area charitable drive alongside endorser Christian Bale, who is known for his lead role as Batman in the box office smash hit The Dark Knight and lead actor in American Psycho.

The story arc begins with a young man whose values are rooted in hard work and altruism. As opportunity comes his way, we see him branch out and prosper to reach staggering heights of success — only to have it snatched away overnight.

As everything comes crashing down, the hero finds himself in a devastated landscape of despair. But just when all hope is seemingly lost, an “angel” appears, offering him a chance at redemption. Through perseverance, grit, and enormous personal effort, the near unimaginable rewards he ultimately reaps transform not only himself but uplift an entire community in the process.

Of course, the story of Alex Pissios is far from over, but the man who’s credited as being the driving force behind the Chicago film and television industry’s amazing renaissance is taking a breather between acts. Having recently sold his monolithic filmmaking enterprise, Cinespace, to the tune of a billion dollars and change, that’s understandable.

The Early Life and Times of Alex Pissios

Alex Pissios, Act I, takes place on the Northwest side of Chicago. Pissios, his two brothers, and his parents shared the top floor of the family home; his grandparents lived on the second, with an uncle and aunt on the first. “We were the typical Greek American family,” he says. “My first language was Greek, so I still read, write and speak it fluently.”

Pissios’ father is a highly dedicated special ed teacher. Initially, Alex Pissios planned to follow in his dad’s footsteps. After graduating from the Chicago public school system, Pissios attended Northeastern Illinois University, where he majored in special education, with a minor in secondary education. He’d just set his foot on the first rung of the career ladder as a student teacher when, in 1994, someone “made him an offer he couldn’t refuse.”

Pissios’ maternal uncle, John Mirkopoulos, who owned a leather and fur business in Indianapolis, was planning to expand to Chicago. He wanted someone he could trust — as in family — to run his new Michigan Avenue location.

Pissios’ immediate reaction was skepticism. Reluctant to give up teaching, he told his uncle: “First of all, I don’t even like fur; I’m not into leathers.” But when Uncle John countered with a figure that more than tripled his teaching salary, Pissios reconsidered.

For the next decade, Alex Pissios toiled in the fur and leather biz, putting in 12-hour days, seven days a week, including holidays. Ten years of that grueling schedule was enough. With an eye toward new challenges, he set his sights on real estate development.

A meteoric rise was followed by a cataclysmic fall. When the bottom dropped out of the market in 2009 and ’10, Pissios was facing bankruptcy. His house was in foreclosure. His wife, who’d just given birth to their third child, went back to work. Alex Pissios, “mover and shaker,” became a reluctant full-time househusband.

Like Jimmy Stewart’s character in It’s a Wonderful Life, he contemplated suicide, but he too, had a guardian angel looking out for him. Unlike George Bailey’s Clarence, Alex Pissios’ angel was corporeal — and as luck would have it, he was also one of the investor variety. A serendipitous meeting at a family wedding led to a conversation that would be life-altering.

Nick Mirkopoulos, Alex Pissios’ maternal great-uncle, owned Cinespace, a booming Toronto-based production facility. After hearing of Pissios’ financial woes, Mirkopoulos threw him a wholly unexpected lifeline: Not only would he set his great-nephew’s bankruptcy debts to rights, he’d also bankroll a studio facility in the Chicago market and put Pissios in charge.

In a business where perception is everything, however, selling Chicago to Hollywood wasn’t an easy task. Even as the ink dried on their first space, Pissios and Mirkopoulos made a pilgrimage to the West Coast to assure film execs they’d get great bang for their buck, state-of-the-art facilities, and the full cooperation of Chicago’s sometimes temperamental entertainment unions for their productions. It was a promise they delivered on.

With the Dick Wolf triumvirate of Chicago P.D., Chicago Med, and Chicago Fire as its cornerstone, Cinespace has been home to numerous high-profile film and television productions including The Dark Knight, Superman v Batman, Transformers, and Divergent. (Pissios’ personal fave was the short-lived gritty Starz drama Boss, starring Kelsey Grammer in the role of embattled Chicago Mayor Tom Kane.) Thanks to Mirkopoulos’s ongoing support, Pissios parlayed an initial $500,000 investment into a billion-dollar behemoth and Cinespace became the largest film studio company in North America.

Per an article in Chicago magazine: “In the studio’s first five years, economic activity from Chicago film and TV production more than doubled, from $600 million a year to $1.3 billion. NBC alone employed 1,300 people on its local productions in 2016, paying more than $150 million in wages.”

Pissios estimates from the time Cinespace Chicago opened, it’s been responsible for creating more than 20,000 jobs. The International Alliance of Theatrical Stage Employees (IATSE) membership alone has risen from 200 to 300 to the thousands. Local productions have gone from one or two per year to upwards of a dozen projects filming simultaneously on any given day.

The stats are impressive to be sure — but they’re not the only achievement of which Alex Pissios is proud.

Alex Pissios and his brother pose for a photo in a conference room in front of a collage of scenes from Cinespace Chicago Film Studios in Chicago.

Giving Back and Paying It Forward

While certainly driven by a desire to succeed, Alex Pissios is “genetically predisposed” to leave the world a better place than he found it. For some, creating a world-class production facility would have been enough, but he’s never forgotten that when he was at his lowest point, someone stepped in to give him a second chance.

Having risen from the ashes himself, Pissios committed himself to forging pathways so others could do the same. As Cinespace grew, he recognized revitalizing the community would mean more than simply investing capital. He’d need to become an engine for positive economic and social change.

Alex Pissios realized early on there was a disconnect between the North Lawndale neighborhood Cinespace called home and the army of people that brought its productions to life. It was something he set out to change. “When you’re looking at 20,000 people working and you notice the community is predominantly Black but the workforce does not reflect the neighborhood, you knew something was not happening in the right way,” Pissios explains.

In honor of his uncle Nick (whom Pissios describes as a lifelong “under the radar” philanthropist) who’d passed away in December 2014, Pissios partnered with NBC and Dick Wolf Films to establish the CineCares Foundation. The program offers neighborhood minority youth paid internships that can lead to lucrative careers in entertainment.

Along with a fair hourly wage, Pissios picked up the tab for union dues, thus allowing participants entrée into an industry from which they might otherwise have been excluded. “The main thing was to help these young kids, because when you’re in a neighborhood like North Lawndale where 50% of the kids who graduate high school don’t go to college, what are they going to do? You get mischief,” he says. “I used to tell them, ‘I don’t want you shooting guns. I want you shooting nail guns. I want to teach you how to build a set, how to paint a set, how to be a gaffer.’”

He also told them what they did with the opportunity was up to them, although he did admonish, “If you screw this up, you’re an idiot.” He’s proud to report most of CineCare’s graduates have more than exceeded expectations.

As the program expanded, new partners came aboard, including the Academy Awards. With the launch of the Cinespace facility in the Hispanic Little Village neighborhood, Pissios set up a second CineCares outreach program to serve that community as well.

When Alex Pissios sold Cinespace after his stellar run, the CineCares program was part of the package deal. Also being continued is the partnership Cinespace formed with DePaul University’s Film School. When that deal was originally struck, the school ranked somewhere in the top 200 nationwide. Today, under Cinespace’s aegis, they’re in the top 20, with a reputation as one of the finest programs of its kind in the country.

The Legacy of Alex Pissios

​​To say Alex Pissios has come a long way since his days as a student teacher is an understatement, and yet the young man driven to work hard to do good remains intrinsic to the character of the man he’s become. Hailed by some as the man who single-handedly put Chicago on the map as a leading film and television production destination, that’s a credit he staunchly refuses not to share with the man who made it all possible, Nick Mirkopoulos.

Alex Pissios isn’t quite ready to discuss what his “next act” will be, but plans are in the works. Will it include making money? More than likely. Will it include philanthropy? Most definitely. Although it’s easy to speculate on the plot and the players, we’ll just have to wait for the sequel to know for sure, but as an Alex Pissios production, it’s a good bet it’s bound to be a blockbuster.