Rolling in the green

For Harvey Gulf International Marine, sustainability is everything

For Harvey Gulf International Marine, sustainability is everything

Shane Guidry has some advice for leaders weathering sudden disruption: “Don’t be red. Don’t be blue. Be green.” The company he helms, Harvey Gulf International Marine, espouses that advice on several levels, from sustainability to revenue. 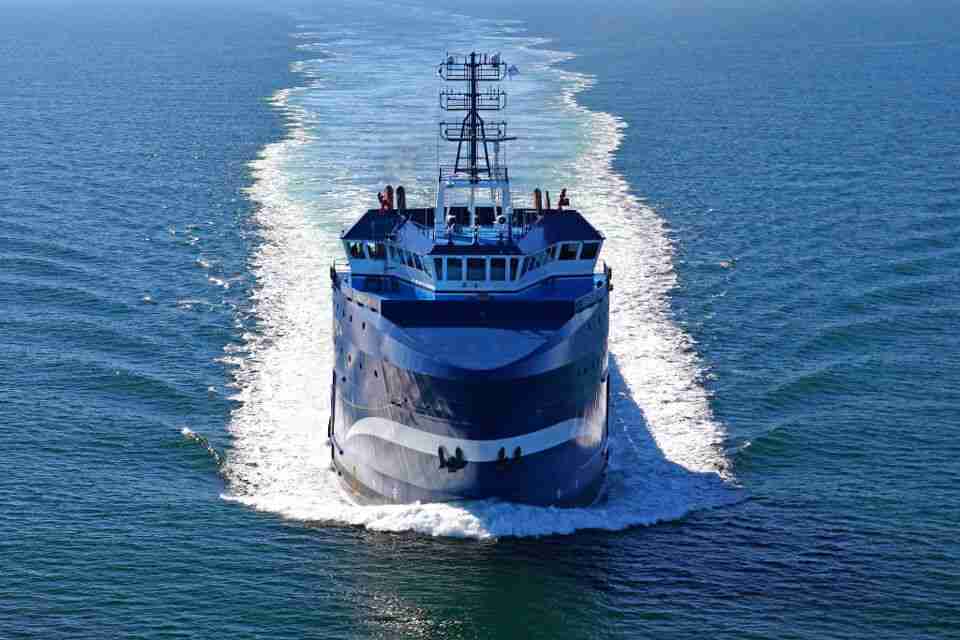 With Shane's son Ashton having joined the company five years ago, four generations of the Guidry family have owned and operated the Louisiana-based enterprise, which provides deepwater offshore marine services to a varied clientele that includes some of the world’s largest energy producers. Since taking the reins from his father in 1994, Shane Guidry has led HGI through the oil and gas industry’s best and worst of times, strengthening the company with bold, future-focused moves.

Harvey Subsea Solutions is the company’s most recent success. Established in 2020, the division is headquartered in Houston and maintains a full-service operations shore base in the company’s Port Fourchon facility. “Now it’s the most sought-after, on-fire subsea company in the Gulf of Mexico,” he recently told BOSS.

From inspection, repair, and maintenance, construction and installation, to decommissioning, completions, and subsea field support, if there’s work to be done on the seafloor, Harvey Subsea can get it done. “We do everything from setting jumpers and pumps to removing them, umbilical repair, to classified defense work, maintenance and repair work, iron ore work — we are the fastest growing subsea company in America,” he added, noting the subsea fleet features four of the biggest, baddest U.S.-flagged boats in existence. 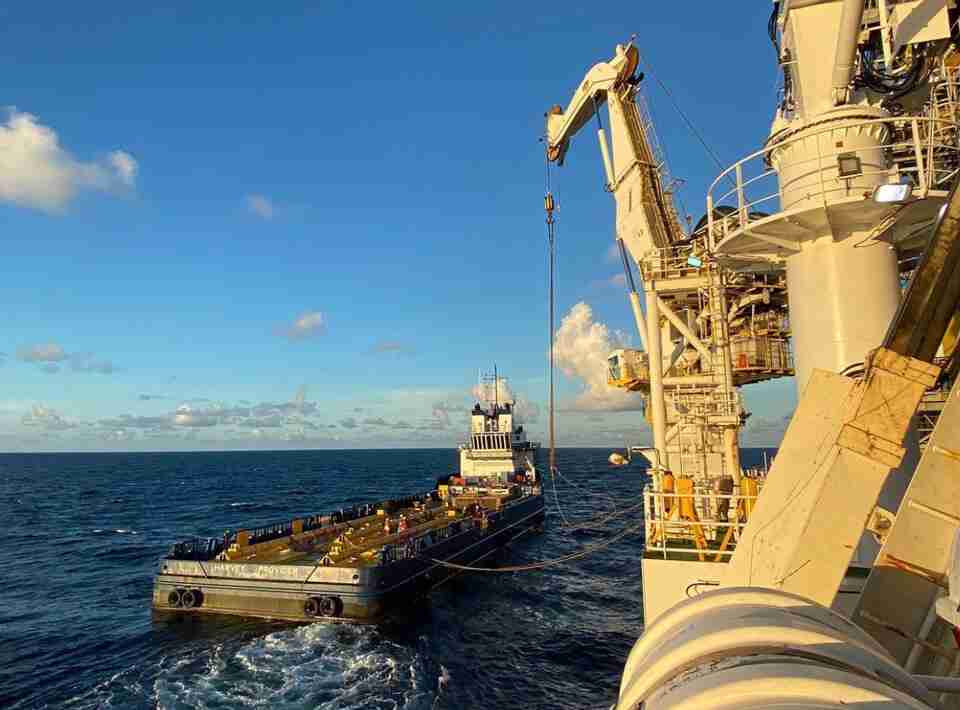 Guidry is passionate about investing in next-generation technology and equipment, and that drive is crushing competitors in the sector. “No one else can deliver the way we can, or as fast as we can deliver to the seafloor and back up again,” he said. If another company takes 10 days to do a job, Harvey Subsea can slash the turnaround time in half, and do so safely and with the highest quality workmanship possible.

“Because of the technology we have on our boats that other companies don’t have, and the money we put into them to be bigger and bolder and stronger with better equipment, and we’ll do it in five days,” he confirmed. “When you charge a company $40,000 a day for a boat and you just saved the company five days, you save them some real money.”

Harvey Subsea is led by a team of industry experts with the engineering strength and operational experience to power the trailblazing business unit into the future. The division is made up of four vessels: the Deep Sea 165T, Intervention 165T, Blue Sea 250T, and the Subsea 250T. HGI’s existing fleet of offshore supply vessels will support their operations. 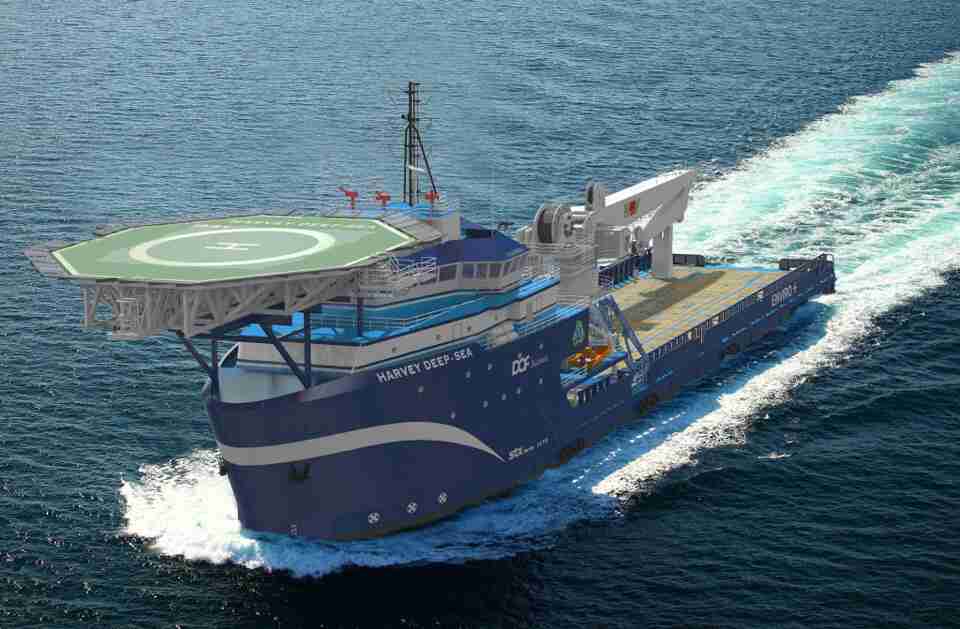 When we last spoke with Guidry, the oil and gas industry was shaking off a dismal six-year slump. At the time, he expressed his desire to see HGI become the largest public marine transportation company in the world, producing the highest EBITDA returns with the lowest cost of operation. Today, the company is well on the way to achieving that goal. “Our business is amazing right now,” he enthused. In the first quarter of this year, EBITDA increased by 40%, rose to 60% in Q3, and is expected to reach 75% in Q4. “That’s purely because there’s a whole bunch of light at the end of the tunnel.”

For HGI, that light is coming from environmental sustainability initiatives. Operating the most environmentally conscious company of its kind has been a mission championed by Guidry for nearly three decades. As a result, HGI is leagues ahead of service companies that are just now scrambling to take advantage of the oil and gas industry’s embrace of sustainability plays.

“We started this commitment back in 2011 and invested nearly half a billion dollars into this technology when there wasn't even a customer base wanting it or requiring it. We saw this coming,” he affirmed, noting that none of HGI’s challengers in the sector are running their vessels on battery power and LNG. “That will change one day when companies right-size themselves up and realize they have to do that to be competitive. We came in early, and we built the equipment.” 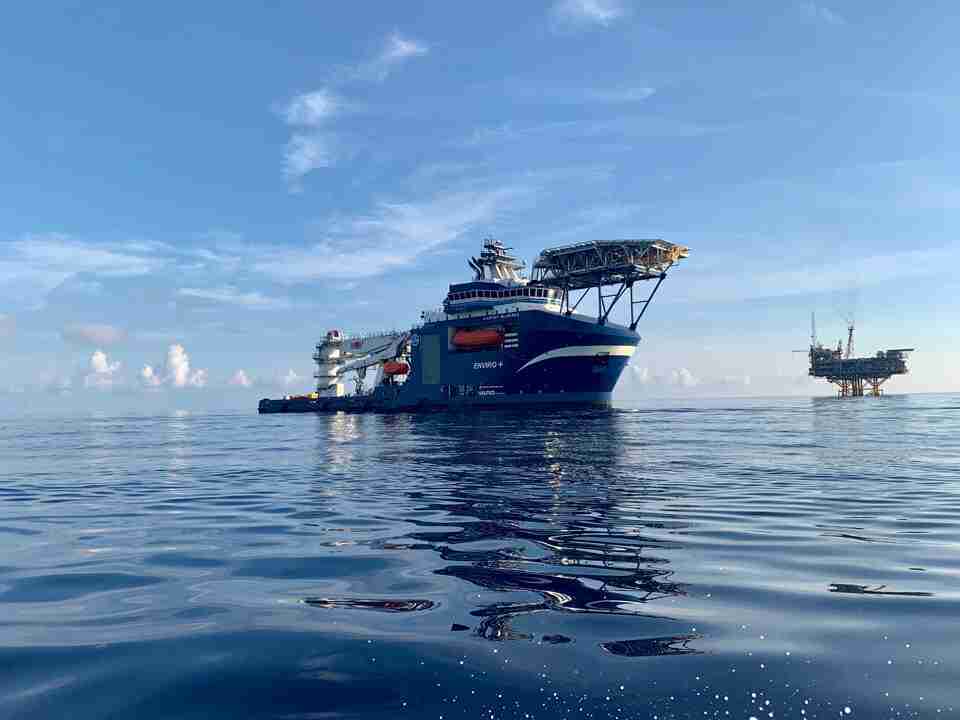 HGI owns and operates the only domestic offshore support vessels in the Gulf of Mexico that are exclusively powered by LNG. According to the company, when boats are fueled with LNG, nitrogen oxide, sulfur oxide emissions and particulate matter — the three primary pollutants produced by the shipping industry — are reduced by up to 99%.

The American Bureau of Shipping (ABS) granted HGI the Enviro+ Green Passport Certification, which requires ships to be constructed with ABS-certified environmentally friendly materials. Certified vessels must be equipped with advanced fuel tanks and containment alarms to prevent environmental harm while they are in use. 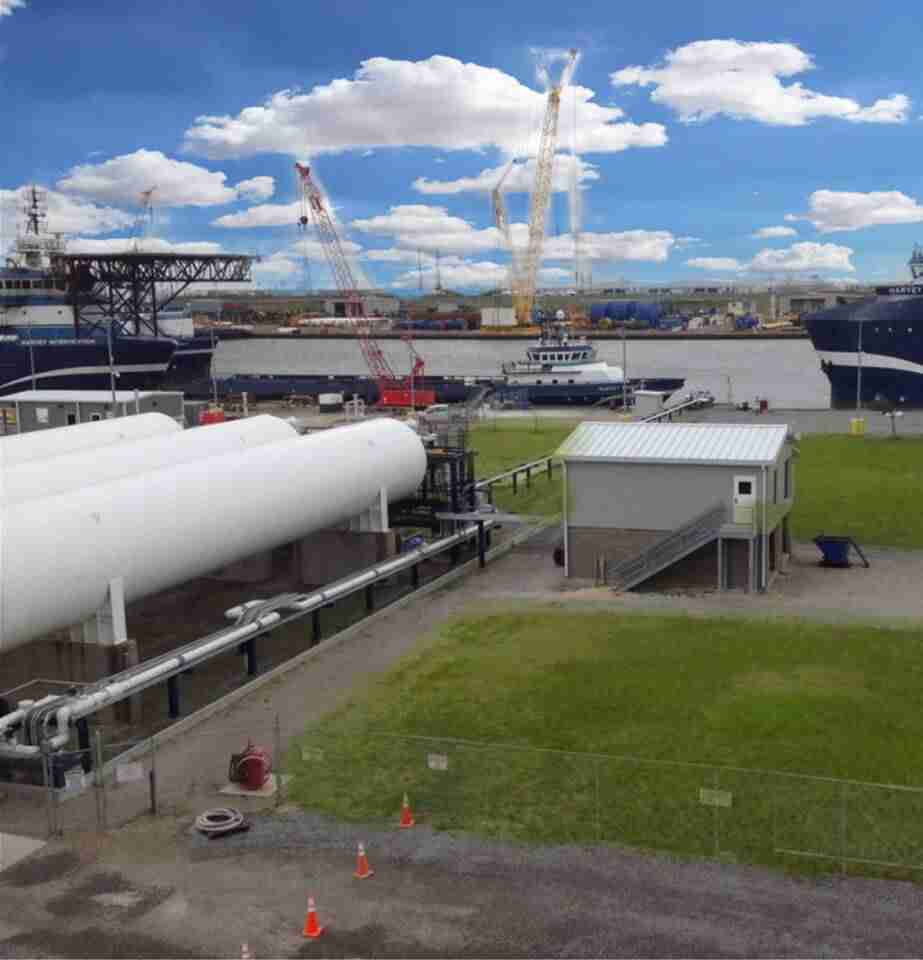 Last year, the company launched their first tri-fuel platform support vessel (PSV), the Harvey Energy, which operates on battery power backed by LNG and diesel and will have a five-vessel fleet of carbon-neutral PSVs by March. “We are going to take our five tri-fueled boats and start fueling them with renewable LNG,” he continued. “We’ll get a certificate for burning carbon-neutral LNG in those engines, which we’ll be able to pass on to the charters; they’ll be operating boats that are carbon-neutral.”

By the end of 2022, the HGI fleet of PSVs, fast supply vessels, multi-purpose supply and field support vessels will be battery powered. “We’re looking to add energy fuel cells to one of our vessels now. We’re looking at what to do next for a vessel running on hydrogen, we’re working on that now, and we’re looking at the all-electric vessels as well. We’re looking at all of it,” he stressed.

The company is currently installing real-time emissions monitoring systems that measure and compare the emissions from all the fueling modes it uses, with the goal of establishing benchmarks that can be used throughout the industry. 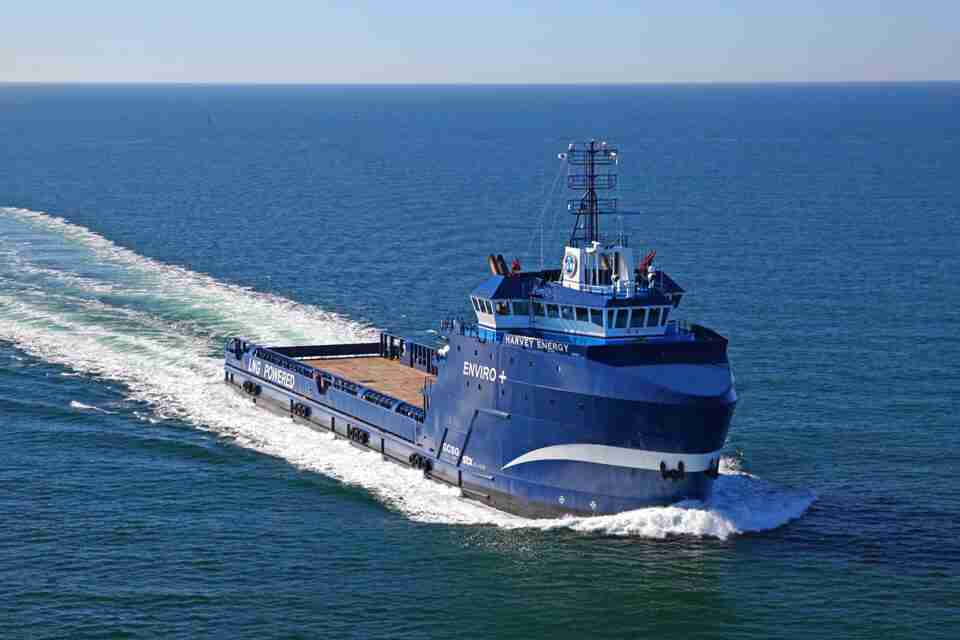 As oil and gas majors and supermajors accelerate their efforts to shrink their carbon footprints, partnering with suppliers that are equally concerned with environmental, social, and governance (ESG) issues is becoming increasingly important to them. “We are the only ESG boat company in the United States with all this different new cleaner-burning technology, from the ATBs delivering energy to cruise ships, to tri-fueled boats, coming out with renewable LNG in our vessels. Nobody’s doing any of that,” Guidry asserted.

In addition to running HGI, in 2019 Guidry became owner and CEO of Quality Liquefied Natural Gas Transport (Q-LNG), a provider of safe LNG transit solutions, to advance his goal of being the go-to developer of marine LNG infrastructure throughout the world. Q-LNG completed its 1,000th LNG bunkering (fuel supply) operation in April 2021.

At a celebration commemorating that achievement, Guidry said, “When we began operations at North America’s first LNG bunkering fuel facility in 2013 with the only vessels that ran on LNG, we didn’t realize that we were America’s pioneers for use of LNG as a marine fuel. Nor did we have any idea LNG bunkering would turn out to be what it is today, the fastest-growing clean fuel market in America.” 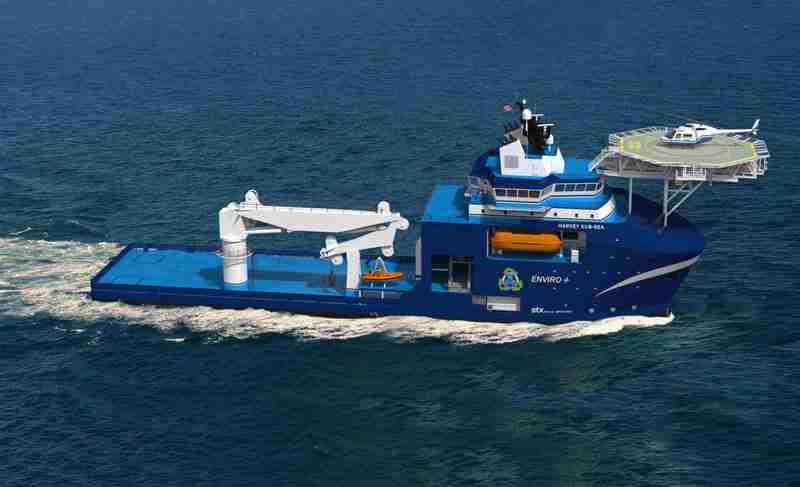 Q-LNG recently completed the nation’s first offshore LNG bunkering articulated tug and barge (ATB) as part of a long-term contract with Shell Trading (US) Company. As stated in a joint release, the ATB is “designed to provide ship-to-ship transfers of LNG to vessels utilizing LNG and ship-to-shore transfers to small scale marine distribution infrastructure, the ATB is an integral part of the LNG infrastructure along the southeast U.S. coast. This critical milestone in the development of marine LNG infrastructure is an important step in the safe, reliable transportation and delivery of LNG in North America.”

Together, HGI and Q-LNG are positioned to leave latecomers to the market empty-handed. “We’re still far ahead of our competitors in America. No U.S.-flag company is doing what we’re doing. We have a little more time to do those things. We’ll come out with carbon-neutral tri-fueled boats with renewable energy from dairy farms,” he said. “Once we get that well-seeded and planted into our customers, we’ll be coming out with the next wave of cleaner energy solutions for our vessels.”

Harvey Gulf International Marine, LLC is a marine transportation company that specializes in providing Offshore Supply and Multi-Purpose Support Vessels for deepwater operations in the U.S. Gulf of Mexico.

Harvey Gulf is founded on the premise that superior performance and safer operations provide our customers value and satisfaction. 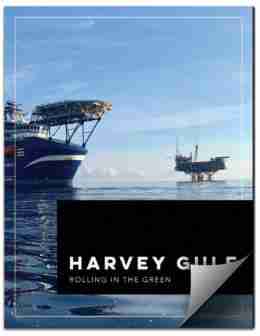