With a focus on environmental health, economy, and productivity, the Gulf of Mexico Foundation (GMF) has been a voice for conservation in the region since 1990. The foundation was established as a conduit for industry to have a coordinated and effective involvement in the region, and has been a part of development, habitat restoration, and environmental education for teachers and students since its inception.  Numerous private sector businesses as well as state and government agencies partner with the GMF to implement education and restoration programs every year.

Although the GMF is based out of Corpus Christi, Texas, the foundation works with the other coastal states—Louisiana, Mississippi, Alabama, and Florida—as well as Mexico and the Caribbean territories of the U.S and has since invested and leveraged more than $10 million in 15,000 acres of habitat restoration projects in this region.

“I’ve lived near the coast my whole life, and after a while you feel a certain commitment to maintain and preserve the environment,” said Quenton Dokken, president and CEO of the foundation, in an interview with BOSS Magazine. “GMF is providing great educational programs and opportunities to get involved with preserving the region for future generations.”

Successful conservation efforts are based on one main keystone: education. Educating both teachers and future generations about the importance of maintaining the Gulf of Mexico’s habitats and ecosystems is one of the most important ways the GMF is assisting the region.
Dokken certainly knows the value of education. Before Dokken was president and CEO of the Foundation, he spent time as a researcher.

“I love science, but as a researcher your main goal is to put new knowledge on the shelf,” he commented. “I’m much more interested in putting that knowledge to work.”

Dokken highlighted the Foundation’s Habitat Restoration Technology Training program, which is in its second year and has earned rave reviews from its participants. The program is geared towards the growing society of young people who have not necessarily been successful in the traditional education path or are coming out of the military. Its focus on the 17-25 age group allows the GMF to introduce careers in the coastal zone to people who may not have previously been aware of some of the opportunities. The program works with American Youth Works, Student Conservation Association, Galveston College, and similar organizations to help set the building blocks to a potential career in the Gulf.

We really have an opportunity to broaden the visions and horizons of these kids, and introduce them to a bigger world, and even a bigger way of thinking. More than ever we need to teach kids to be critical thinkers, and the Coastal Rangers Program is hopefully one way the GMF will be able to do so.
- Quenton Dokken, president and CEO

The Coastal Rangers Program is one close to Dokken’s heart. The program is currently in development, and will target grades 5-12. The objective is to develop a network of school-based clubs around the Gulf of Mexico from Cancun to Key West.  Led by contracted teachers, these “Coastal Rangers” will engage in field projects important to their local areas, and will be in constant communication with each other via the internet and social media. The intent is to introduce these students to the reality of the size and diversity of the Gulf of Mexico region.

Ultimately, online student conferences will be organized to create dynamic interactions between the Coastal Rangers. Not only will the participants expand their knowledge of economic and environmental issues, they will learn valuable communication, organizational, and leadership skills.

“We really have an opportunity to broaden the visions and horizons of these kids, and introduce them to a bigger world, and even a bigger way of thinking,” Dokken said. “More than ever we need to teach kids to be critical thinkers, and the Coastal Rangers Program is hopefully one way the GMF will be able to do so.”

Teacher programs are a big part of the GMF’s education efforts in the region as well. Nearly 400 teachers have participated in the GMF’s teacher continuing education programs. These teachers reach tens of thousands of students and non-students annually. Teachers’ programs include the Down Under Out Yonder Coral Reef Ecology Expedition and the Intracoastal Waterway Expedition.  Both programs get teachers into the field to study the habitats and socioeconomic structure of the coastal zone.  The Down Under program is its 19th year and the Intracoastal program is in its 3rd year.

What many people tend to forget about an organization like the GMF is that it is not a charity.
“We’re here to educate the general public. We have always maintained that when you partner with us, you’re not supporting a charity, you are investing in a key part of your mission statement,” Dokken said of businesses that work with GMF. 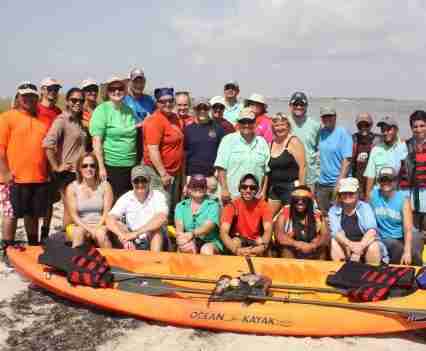 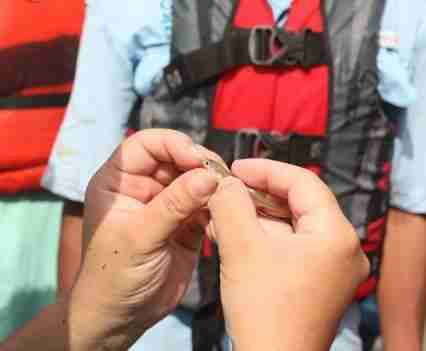 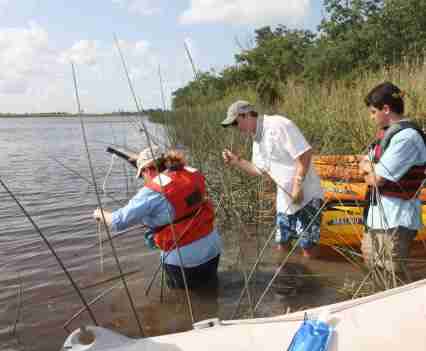 Like a charity however, a steady stream of cash flow can sometimes be an issue. Many non-profit, educational foundations like GMF find success in raising money through public membership services. Dokken shared the GMF has always operated on private sector donations and government grants, but now that the Foundation has a goal of making $10 million a year for projects, membership  becomes a key strategy for the future.

As the discussion turned to the future, the funding component was noticeably an important topic, but one thing stood out above the rest: changing human behavior in the region.

“If we keep letting the same thing happen year in and year out, and the future generations don’t become educated about preservation and conservation, we could lose a lot of what makes the Gulf of Mexico unique and the quality of life it supports,” Dokken commented. “If we can build awareness and understanding and encourage these necessities however, we’ve got a chance.”

Making a Difference
The goal of the Gulf of Mexico Foundation is to ensure a sustainable quality of life for residents and visitors of the Gulf coasts. To reach our goal, the Foundation promotes conservation and preservation of the Gulf of Mexico through voluntary and cooperative stewardship by individuals, communities, and economic enterprises of the United States and Mexico. The Foundation directs its efforts at all fronts – environmental quality, resource management, public health, economic and cultural development, education, and awareness. Humans both benefit from the Gulf’s productivity and pose the greatest threat to its health and sustainability. The Foundation’s belief is that only through awareness, understanding and stewardship can the Gulf of Mexico be conserved and nurtured for the benefit of future generations. 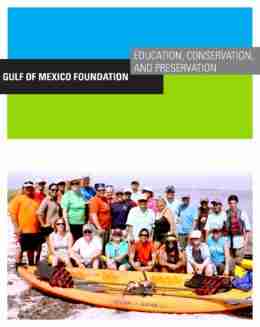