A Giant Step Towards Reinventing Transportation

Elon Musk posed his Hyperloop challenge close to three years ago. How can transportation technology seamlessly take people-packed pods in across low-pressure tubes to their destinations at around 700 miles per hour?

While Musk set out to solve glitches in other realms of technology—say, space exploration and solar energy—one of two top companies got to work and dove deep into concept research.

You may remember this downtown Los Angeles-based company as Hyperloop Technologies. One day after its name change, the firm announced $80 million in new funding on top of $11.1 raised last year. Now it boasts partnerships with technology, engineering, and logistics companies—AECOM, Arup, Amberg Group, Deutsche Bahn, and Systra—and is engaging in early feasibility studies in California and Europe.

In its first public demonstration, team Hyperloop One emerged successful

from safely testing this public propulsion system in the Nevada desert.

The propulsion system zoomed through the desert, from zero to 105 miles per hour in just over one second over the course of a 400-foot track. Without brakes.

How much does this impact the future of transportation technology? The propulsion system is one of several integral features that comprise a functional Hyperloop. Levitation and low pressure-tube sold separately. While these other parts have yet to be unveiled to the public, Hyperloop One has committed to a full-scale “Kitty Hawk moment” by the end of 2016.

Eventually, Hyperloop systems are slated to support travel between San Francisco and Los Angeles within 30 minutes. Implications of this could drastically alter Los Angeles connectivity to Silicon Valley’s tech hub.


As Time Magazine puts it, “Hyperloop One’s test far from proved that the Hyperloop is a realistic idea. It’s about equivalent to NASA testing rocket engines on the ground.” Plenty of challenges will emerge even if the Hyperloop is a proven possibility. The path between the two Californian cities could cost $6 billion. A regulatory obstacle course awaits. The real way Hyperloop One’s system can avoid past mistakes is by bringing in plenty of revenue. 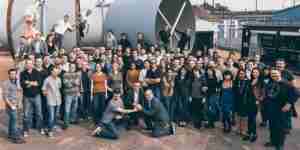 “We can assure you that we’re the one company that’s ahead of all the others in executing on this vision,” said CEO and former Cisco President Rob Lloyd. This slight jab was meant for competitor Hyperloop Transportation Technologies, or HTT, the other firm working on a Hyperloop system of its own.

HTT proclaimed it had licensed a type of magnetic levitation that could result in an extremely energy-efficient Hyperloop design. Will either firm “win” the race to the best Hyperloop?