Light on the Horizon 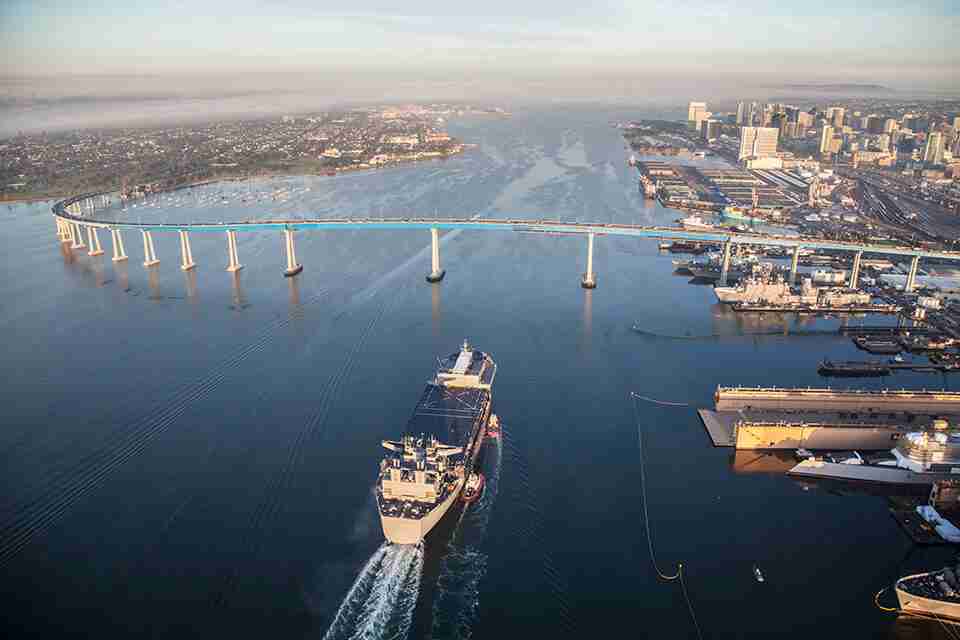 “We design, build, and repair ships for the US Navy and commercial customers. We are anchored in teamwork and propelled by innovation.” So begins the corporate introduction to General Dynamics NASSCO, a subsidiary of General Dynamics (NYSE: GD). Those fundamentals are setting the standard for the design and construction of unique Kanaloa Class containerships at GD NASSCO’s San Diego shipbuilding operations.

Kanaloa Class ships carry cargo from the West Coast to Alaska and Hawaii. Under a 1920 US statute referred to as the Jones Act, commercial ships sailing between US ports must be built in the United States, staffed with an American crew, sail under the American flag, and be 75% American owned.

GD NASSCO’s main shipyard on San Diego Bay, the largest full-service shipyard on the West Coast, designs and builds US Navy vessels and commercial containerships, cargo ships, and tankers, and repairs US Navy ships. Covering 80 acres of land and 46 acres of water, the yard can build vessels up to 1,000 feet long and service or repair any ship sailing on the West Coast.

In the past 10 years alone, GD NASSCO has designed, built, and delivered over 30 oceangoing ships — including the world’s first liquefied natural gas (LNG)-powered containerships.

Currently, the next generation of US Navy fleet oilers, the John Lewis Class (TAO-205), is under construction at the San Diego yard. Oilers are critical to keeping our naval fleet moving; the John Lewis oilers, which can move at speeds up to 20 knots, will hold 162,000 barrels of conventional and biofuels and will have dry cargo capacity and aviation capability.

One important design goal for the John Lewis Class ships was to reduce the Navy’s total cost of ownership, and one potent remedy for that was to reduce the cost of fuel. For GD NASSCO, that meant designing a lighter ship. Prior to designing the next-generation oilers, which were commissioned in 2016, the typical superstructure was built with 10mm and 11mm thick steel. At the time, those thicknesses could be the most efficiently welded. In designing the John Lewis Class, however, 6mm steel was used throughout the superstructure.

According to the company’s director of business development and strategic planning, Tom Wetherald, moving to a lighter steel panel was part of the design strategy to make a lighter, more efficient vessel. “Because of the requirement to reduce cost and our need to replace our oldest panel line because it was wearing out, we made a synergistic decision to install a new panel line capable of welding thin steel — and then set out to find the technology to do it.” 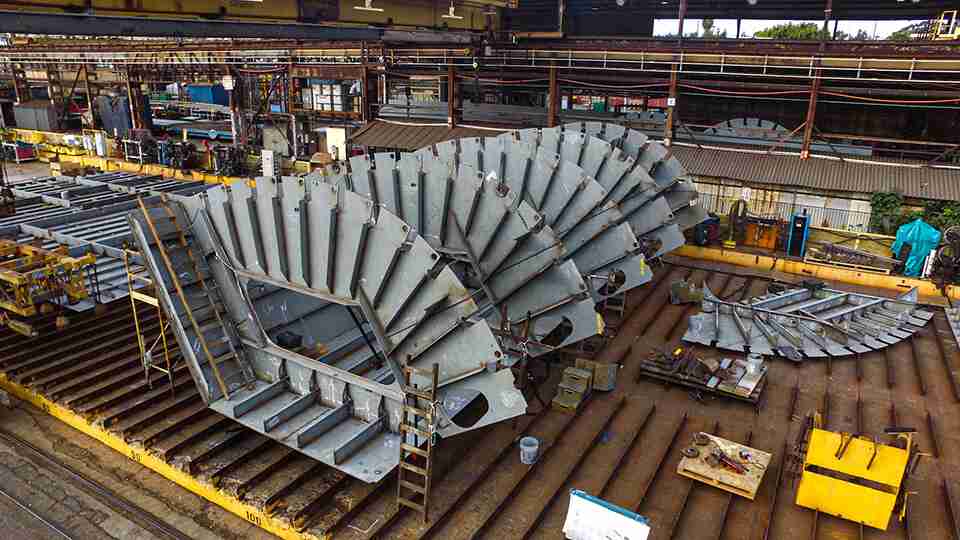 When container shipping and logistics giant Matson Navigation Company, Inc., approached NASSCO to design and build two 870-foot long, 3,500 TEU (twenty-foot-equivalent) containerships with roll-on, roll-off “ConRo” capability and LNG-capable main and auxiliary engines, the massive project became the first class of ships to be built with one of the most highly automated steel panel line processing operations in the world.

“These two very fast ships are designed to do a weekly service: Each can make that trip in a week,” he continued. “They were designed very specifically to carry vehicles, cars, and trailers that are needed in that trade, and were designed to carry 48-foot containers and smaller because any larger containers, like the ones that go to Puerto Rico, are illegal on the roads in Hawaii.”

Technical and logistical challenges abounded; builders had to construct a large garage on the stern, rising several stories high, for example. “There was a real need in the design of the ship to make that superstructure as light as possible,” Wetherald said. Additionally, Matson required the decks in the garage to be dead flat. “As they load cars, they drive up to 40 miles an hour inside this garage. You can imagine that if the deck was going up and down the way you often find ship decks, that you'd be bouncing the cars into the low overhead. The deck needed to be really flat.”

“Having a lightweight superstructure means that you need to use really thin steel. The upper superstructure needs to be able to handle the weight of all those vehicles. The ship was designed with most of that garage built with somewhere around 6mm steel. If you think about that, 5mm steel is the equivalent of 1/4 of an inch. That's very thin when it comes to steel.”

To meet both the light weight and flatness requirements, not only did the shipyard itself need to be changed, the processes themselves needed to be upgraded to never-before-attained standards of efficiency. Said Wetherald, “Prior to this, the minimum we could weld efficiently was a plate of 10mm thickness. Our old welding process required a lot more heat that could distort thinner steel plate. When you go down to 5 or 6mm, that kind of heat will cause very serious distortion and there would be waves through the steel.”

The NASSCO team turned to world-leading European technologists specializing in low distortion thin plate welding. “All the technology was European technology, both German and Dutch, and is used by the largest cruise ship builders in the world.” In adapting the technology for this new class of containerships, GD NASSCO created a thoroughly unique vessel. While the container ship project was the first one through the new facility, the John Lewis Class Navy Oilers are now being produced there and will be for many years to come. 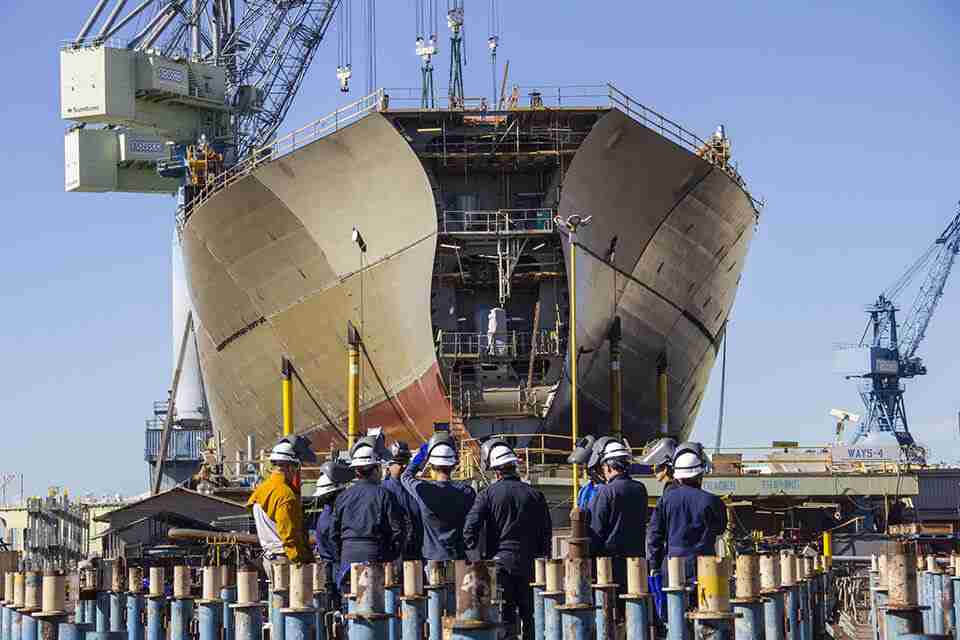 Making room at the shipyard for the new panel line system required moving the old gear out, reorienting it to another part of the yard, and building a new facility to accommodate the new technology. “The construction of the thin plate panel line began in August of 2017. We started production throughout the facility in 2018, and we've been running for over a year now. It was really fast,” remarked Sarah Dominique, the assistant manager in GD NASSCO’s Steel Department overseeing the new panel line facility.

“We selected a prime contractor, single point of contact, for both the civil and the equipment installation; they were responsible for making the entire design come together, communicating with and coordinating multiple contractors,” she said.

One of the more daunting logistical feats was orchestrating the movement of 16 giant components from the Port of Houston and through interstates and back roads to make it to San Diego by flatbed. “The largest piece was about 80 feet long. That came on a flatbed truck that was over 100 feet in length, attached to a truck, combining for an overall 150 feet in length,” Dominique recalled. CHP escorts and careful scheduling combined with the judicious timing of permits needed to cross state lines made the trek successful.

In late December 2019, Lurline, the first of the Kanaloa Class ships, set sail. Matsonia, her sister ship, is scheduled to commence service this year. The construction of the first of the John Lewis Class of ships is in full swing.  Thanks to General Dynamics NASSCO, a new era in naval shipping begins.

General Dynamics NASSCO traces its beginnings to the working waterfront of beautiful and historic San Diego Bay. The company has been designing and building ships in San Diego’s industrial heart since 1960 and is the only full-service shipyard on the West Coast of the United States.

Today, General Dynamics NASSCO has locations on the West and East coasts. We specialize in the design and construction of auxiliary and support ships for the U.S. Navy, and oil tankers and dry cargo carriers for commercial markets. NASSCO is also a major provider of repair services for the U.S. Navy’s global force for good, with capabilities in San Diego, Norfolk, Mayport and Bremerton. 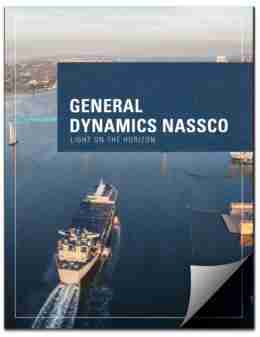