While there is nothing like seeing them live, watching games at home or in a sports bar has become the standard for countless sports fans across the U.S. In an effort to give fans a strong reason to see the game live, future NFL stadiums are better than ever. With state–of–the–art technology and creative architecture design, these NFL stadiums aim to reinvent the game–day experience.

Here is a look at some of the coolest future NFL stadiums and why they are like nothing before. 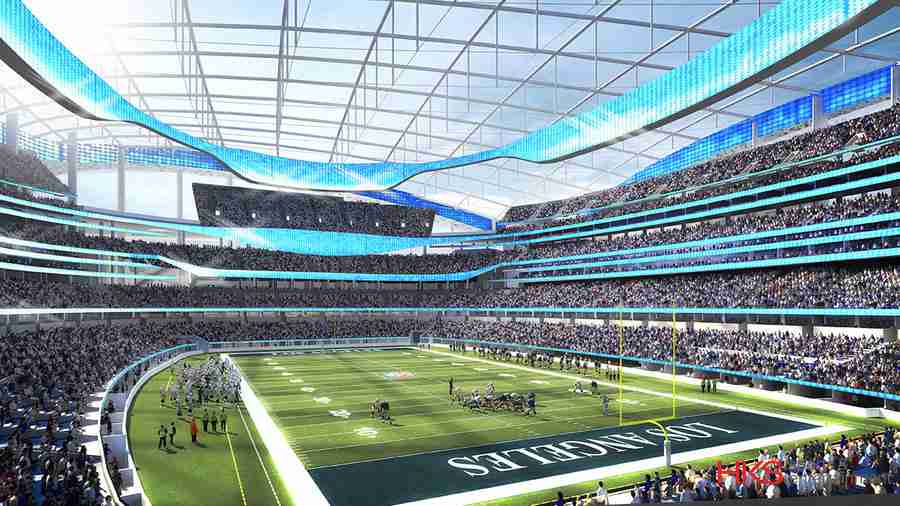 Despite being in its early stages, the still unnamed L.A. sports complex is one of the most promising future NFL stadiums. It will be the home of the Los Angeles Rams and Los Angeles Chargers and is slated to form part of a 298-acre sports and entertainment complex development in Inglewood, California. The stadium will be able to seat around 70,000 people for football games, can be expanded if needed, and will also have a fixed roof.

“This project is big and different in all positive ways,” said Chris Hibbs, Chief Revenue Officer for the L.A. Stadium and Entertainment District.

Los Angeles is a city known for its larger-than-life image, which will undoubtedly lend its flair to the entertainment complex. According to Hibbs, what will set this stadium apart is its ability to provide and elite football game experience.

“You have to make sure you have cold beer and great hot dogs and food options. Great sight lines and video boards that bring replays and Red Zone to life like no other building. All the things the typical NFL fan is looking for in a venue,” explained Hibbs.

This future NFL stadium will cost $2.6 billion and is already scheduled to host both Super Bowl LVI in February 2022, and the opening of the 2028 Olympics.

Completed in 2014, it’s not technically one of the future NFL stadiums, but Levi’s Stadium—home of the San Francisco 49ers—in Santa Clara, California is definitely worth mentioning. Levi’s Stadium is also known as the world’s first smart stadium for innovatively incorporating technology into the overall experience.

“We looked at ways in which we could change the experience for fans through technology,” said Jim Mercurio, Vice President, Stadium Operations and Security for the San Francisco 49ers.

“The connectivity here allows for simultaneous users. Instead of having to miss some of the action, he or she can pick up the app and order a hot dog and a beer at their seat. They might look at some of the replays that they might have missed in live play.”

Additionally, Levi’s Stadium stands out for its use of technology to enhance sustainability.

“We’ve got some voltaic panels up in what we call the Suite Tower,” added Mercurio.

Not only are the panels on the 18,000-square-foot rooftop suite, but are also on the complex’s three pedestrian bridges. Due to the extensive amount of voltaic panels, the stadium achieves net-zero energy on game days. The building also met the goal of scoring LEED Gold status, and is the first professional stadium to do so.

The Mercedes–Benz Stadium is a future NFL stadiums that was completed just two months ago and will be home of the Atlanta Falcons. Located in downtown Atlanta, Georgia this stadium hopes to be the league’s first LEED platinum-certified sports arena in the world. With its 190 luxury suites, 700 concession points, and a capacity of 71,000 people, this $950 million stadium will have unique features of its own.

“Two of the most noticeable features are the oculus and the Halo board,” said Mike Gomes, Senior Vice President, Fan Experience at AMB Sports and Entertainment Group.

According to Gomes, the eight-panel, retractable roof—which opens and closes like an aperture of a camera—is inspired by the oculus roof design from the Roman Colosseum and the Pantheon. As for the Halo board, the iconic 360-degree continuous screen will be mounted above the fans.

The stadium was also built with high sustainability goals in mind as they “are trying to achieve a level of sustainability that the rest of the country, if not the world, will look at with pride,” added Gomes. 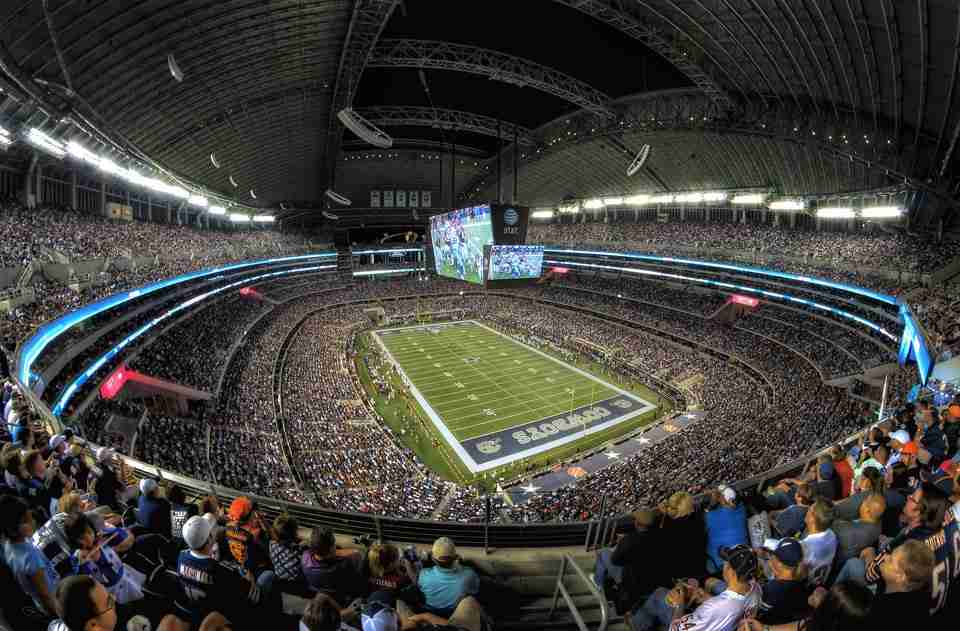 Located in Arlington, Texas is the AT&T Stadium, home to the Dallas Cowboys. Also, not one of the future NFL stadiums in construction, as it was completed in 2009, this stadium is still a modern marvel. Worth $1.3 billion, the AT&T Stadium has 342 suites, and a capacity of 80,000, making it one of the biggest stadiums in the league.

“We have 32 cameras installed,” said Diego Prilusky, VP Product and Creative Director of FreeD. “We can capture the entire field of action in the play. The technology is basically stitching each image, one after the other.”

This type of technology is not only some of the most innovative but also the most valuable as it films the same play from different angles. This provides footage from a multitude of cameras, giving the best shots of every play.

“It gives us a great analytical look,” added Ken Aagaard, Senior Vice President of CBS Sports. “It’s another tool in the toolbox we can use to be able to tell the story.”

Through the use of multiple cameras, a 3D effect is added to a 2D plane, giving fans a unique way of viewing such things as controversial calls. 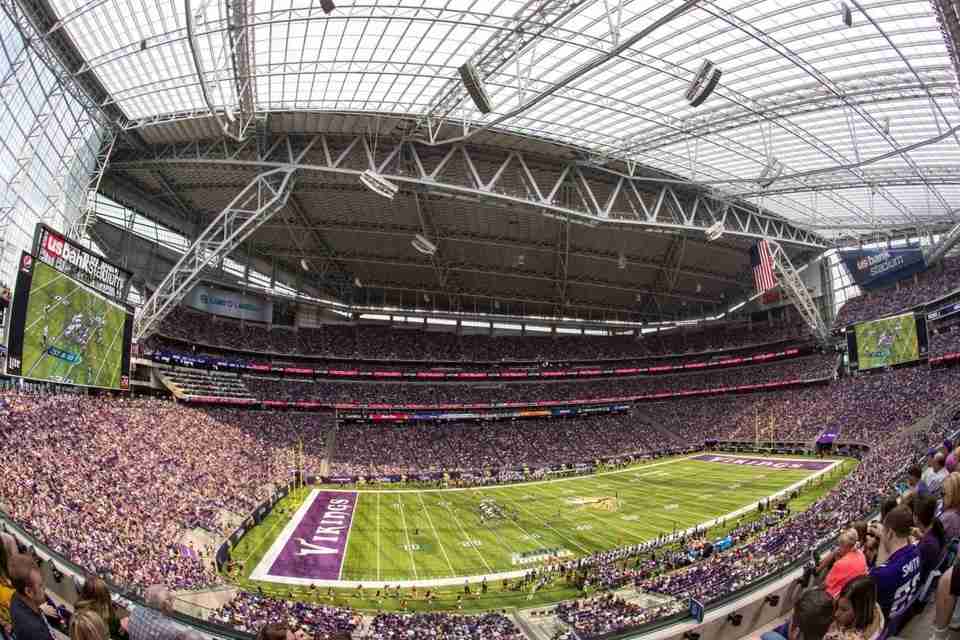 Yet another completed stadium is the home of the Minnesota Vikings, the U.S. Bank Stadium, which is located in Minneapolis, Minnesota. Worth $1 billion, it has a capacity of 66,000 people, 2,000 screens, and is the biggest construction project in the state’s history.

However, what makes this stadium worth noting among the future NFL stadiums is its use of a material called ETFE. The stadium’s roof is made of the translucent plastic, which lets enough sunlight in to create an outdoor feel while giving spectators the shelter of an indoor stadium.

“We arrived on the ideal solution for this market, that indoor-outdoor experience,” said Lester Bagley, Vice President of Public Affairs and Stadium Development for the Vikings.

The ETFE roof has made it possible for the U.S. Bank Stadium to be “a stadium for all seasons.”

“I just don’t see somebody not wanting to come to a stadium anymore and just watching it on tv,” added Mercurio when reflecting on the evolution of the game day experience.

With painfully beautiful architecture and unprecedented technology implementation, these future NFL stadiums hope to reinvigorate passion for the stadium experience.

“It’s convenient to be at home, but you can’t beat the live experience, being with 70,000 people and in an immersive experience. The sound of the crowd booming. There’s nothing like the game day experience,” said Scott Jenkins, Stadium General Manager for the Atlanta Falcons.