If you have ever sipped Blue Bottle or Stumptown’s popular brands of cold brew coffees, Starbucks will now be vying for your caffeinated attention this summer.

The “Willy Wonka of Coffee” introduced cold brew coffee to its menus last year and sales of iced coffees grew 20 percent in the fiscal year. Starbucks expects cold coffee sales to double over the next three years. 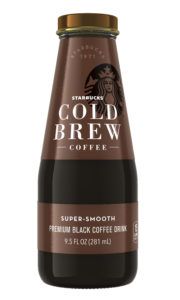 Global market research firms NPD Group and Mintel point out that iced coffee consumption has grown 75 percent in the past 10 years, with sales of cold brew soaring close to 340 percent between 2010 and 2015.

Even the maker of the Blizzard is throwing their hat in the ring. Dairy Queen began offering iced coffee in May, with the option to blend in its soft serve with cold coffee.

Artisanal coffee has been having a moment in the last couple years.

According to Euromonitor, they have been growing faster than the fast food sector over the course of the last three years.

Starbucks has jumped on the elevated trend by designing a high-end customer experience through its Seattle roastery opening in 2014—which already sells nitro cold brewed coffee—and its Starbucks Reserve Roastery and Tasting Room in New York, expected to open in 2018.

The Reserve line will be highlighted as an in-house roastery, boasting educational elements about the company’s brewing system. 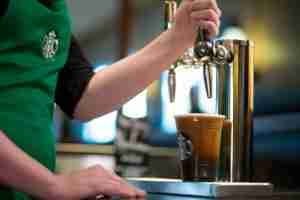 When using room temperature water—even in just a simple pitcher, nothing fancy—you can achieve a smooth, concentrated coffee.


What’s Nitro?
Nitro coffee is stunning, really. It’s a bit like watching a Guinness being poured into a signature tulip glass.

“Whereas draft coffee comes straight from the tap, ‘nitro’, as brew geeks call it, is coffee infused with nitrogen. Similar to a soda fountain, nitrogenated coffee is extra smooth and looks a little like a Guinness,” explains Esquire Magazine.


(This writer personally loves herself some of our local cold brewed coffee options from San Diego’s own Cafe Moto and Dark Horse.)

Never tried the stuff? Eater has a fantastic, taste-tested list of where to begin your cold brew experience: