Stuck on the Suez 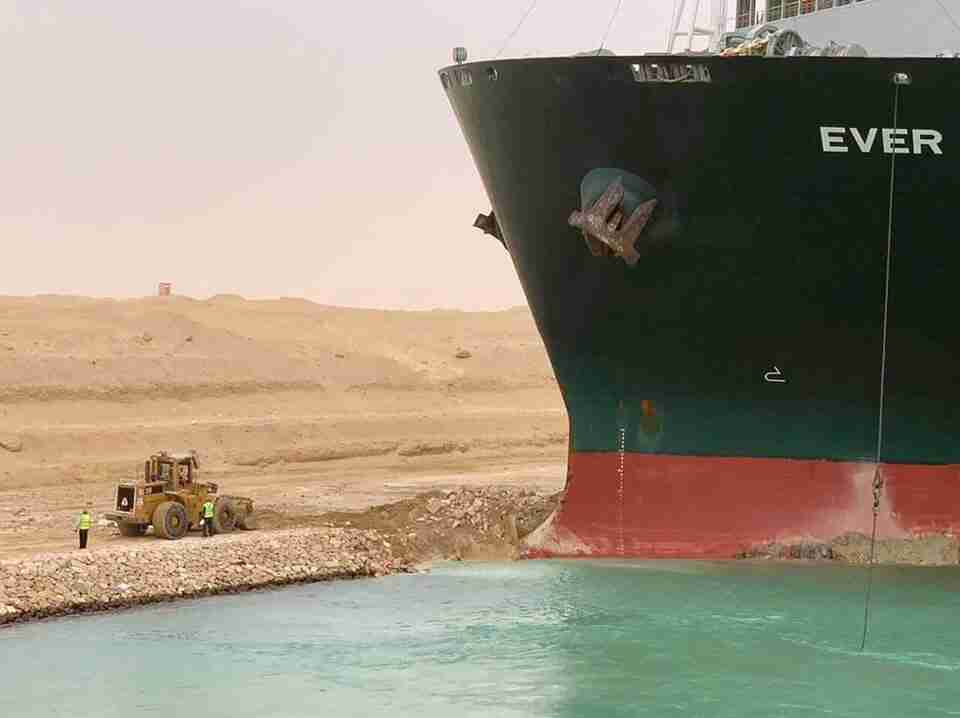 Everything was smooth sailing for the Ever Given – one of the largest container ships in the world – until, of course, it wasn’t.

On March 23, the 400-meter-long ship capable of carrying around 20,000 containers was fifth in line in a convoy of 20 vessels heading toward the Port of Rotterdam, Netherlands, after setting sail from Tanjung Pelepas, Malaysia.

As the Ever Given travelled through Egypt’s 120-mile Suez Canal, one of the world’s most crucial and travelled trade routes since it was opened in 1869, it became caught in a sandstorm which caused its crew to lose the ability to steer, before ultimately running aground.

The ship was stuck. Wedged in place, turned sideways, and blocking the canal on both sides. It would remain there for six days. At least 369 vessels would end up being obstructed. An estimated $9 billion dollars’ worth of trade goods a day – $400 million worth an hour – was stalled before the Ever Given was finally freed.

On any given day, an average of around 50 ships travel through the Suez Canal, which can be so difficult to traverse that the government of Egypt requires ships to board an Egyptian “Suez Crew,” which includes one or more maritime pilots from Egypt’s Supreme Council of Antiquities (SCA) to command the ship. 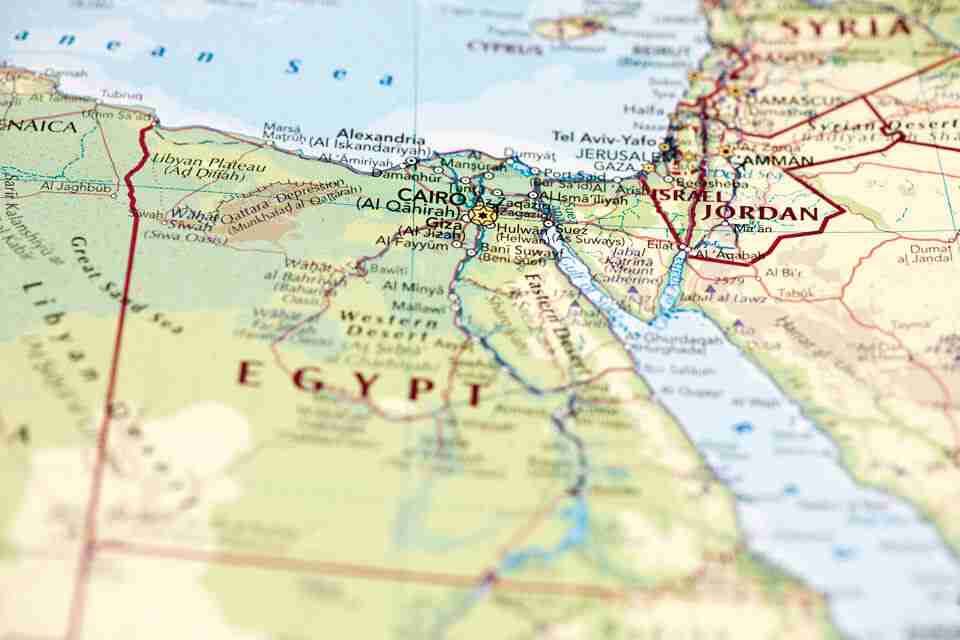 This was the nightmare scenario.

“Every day the canal is closed … container ships and tankers are not delivering food, fuel and manufactured goods to Europe and goods are not being exported from Europe to the Far East,” said maritime historian Salvatore R. Mercogliano, in an interview with the Associated Press, as the ship remained stuck.

The fallout was swift. Oil prices around the world surged while the ship was lodged in place – and subsequently plunged after it was freed – the stock market was heavily influenced, the cost of renting oil tankers rose, and further damage was done to industries already struggling with shortages.

It also put more pressure and strain on an industry already heavily affected by the COVID-19 health crisis, with the pandemic forcing hundreds of thousands to become stuck onboard ships and take on more work because of increased demand, according to Mercogliano.

“It’s because of the breakneck pace of global shipping right now and shipping is on a very tight schedule,” he said. “Add to it that mariners have not been able to get on and off vessels because of COVID restrictions.”

Additionally, the blockage exposed that there simply wasn’t a good alternative route to take, with the default secondary option being to go around Africa’s Cape of Good Hope, which can add two weeks to a ships journey and brings significant safety concerns on account of piracy threats.

“There is a risk there, and it’s probably another reason why the ocean carriers will think twice before they actually go around the Horn (of Africa),” said Genevieve Giuliano, a professor at the University of Southern California’s Sol Price School of Public Policy, in an interview with The Washington Post.

The disaster also brought to the forefront the reality of just how crucial maritime shipping is, not just for the United States or any individual country, but for the whole world.

An estimated 80% of goods are carried by sea, with maritime container trade accounting for around 60% of all seaborne trade. This came at a value of around $14 trillion in 2019. 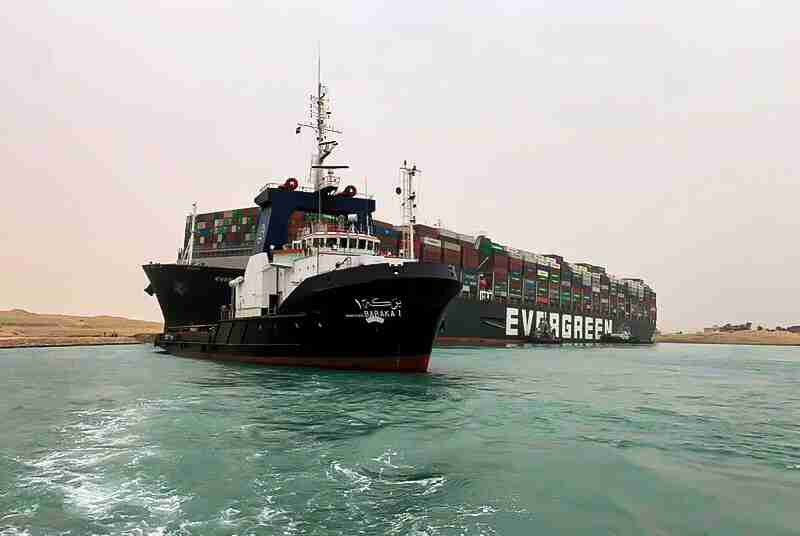 Maersk, the largest container shipping country in the world, issued an advisory on April 8 – 10 days after the Ever Given was freed – warning that the effects from the blockage could not be undone overnight.

“Even when the canal gets reopened, the ripple effects on global capacity and equipment are significant and the blockage has already triggered a series of further disruptions and backlogs in global shipping that could take weeks, possibly months, to unravel,” the advisory read.

Generally, what makes seaborne shipping so popular is that it is an incredibly efficient ways to conduct global trade. This wasn’t always the case.

Before intermodal shipping containers were invented, goods had to be shipped in boxes that were manually loaded and unloaded from ship to ship. This was inefficient, time-consuming, and costly.

By the 1950s, however, the first standardized intermodal shipping container was introduced, reducing time and cost and allowing shippers to easily move their cargo between different means of transport.

Today, the container shipping method is only increasing in popularity, with the size of the intermodal freight transport market estimated to nearly triple in size from 2017-26, eventually reaching $36 billion.

Fueled by the pandemic, the industry’s Q1 profit was expected to reach $2.3 billion, a massive jump from the $44 million it earned in the same period from a year ago.

“Using history as the only guide, the smart bet would be to think that the market will cool down fairly quickly, but these are not normal times,” said maritime consultant, Drewry. “While the huge freight rate inflation in the second half of last year was caused by a consumer consumption driven shift to goods during the pandemic, together with supply chain disruption and restricted capacity, the ‘return to normal’ keeps getting pushed back.”

Carriers have had to lock in annual contract increases with shippers, as the global health crisis has shifted leverage, and have had to reduce minimum quantity commitments in order to secure more space.

It remains to be seen how the industry will look once the dust finally settles, but, for now, container shipping remains a hot commodity. As long as there are no more blockages.

“These ships are being ordered as if they are for today, not what the market will look like when they are ready for delivery,” Drewry said. “Owners are risking paying top dollar for assets that will potentially end the container upcycle.”