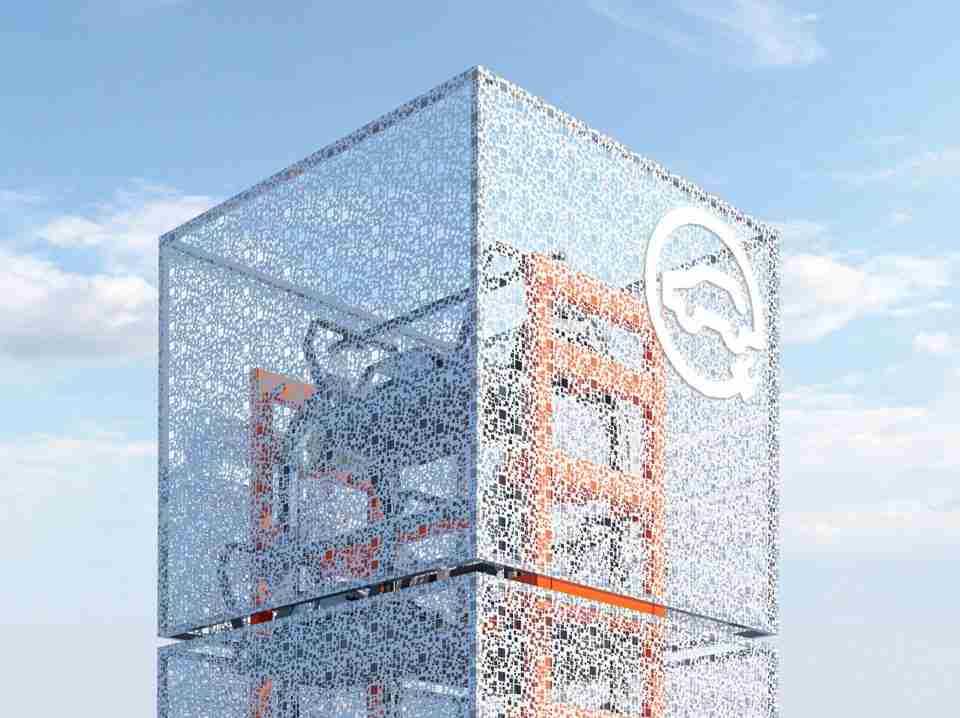 Now, Ennead Lab has developed the idea of a car charging tower.

Impacting Infrastructure
The rise of the electric car—along with the evolving relationship with driver and city—means the towers pose significant changes to that dynamic by increasing the presence of car charging stations throughout cities and highways.

The Proposed Design
Today there are two existing methods of charge, and the tower designs feature an option for either to be integrated into the electric charging stations.

Those opting for a 25-minute charge would leave their cars at floor level, under a reflective, perforated metal canopy.

For the longer method of charge, drivers’ cars would be hoisted up into a carousel-type structure, with multi-level storage space, for five hours. The tower blends existing electric charging station technologies with stack-parking concepts. By efficiently using a small space to maximize the number of cars using the standard charging system, the towers would additionally free up urban, pedestrian space.

Stacking cars to maximize space with a relatively small footprint is not a new concept, this century-old method comes to great use when faced with the challenge of building these towers in crowded cities.

Bored Drivers Lead to More Business
In a scenario where charging towers already exist, the driver is left with at least 25 minutes of waiting time.

In urbanized areas, this could mean a surge in business. Drivers would be mere footsteps away from nearby malls, restaurants, movie theaters, and businesses—a huge commercial opportunity revolving around catering to drivers’ ideal time.

A Trend of Blending the Old with the New
The electric charging station tower prototype is poised to be the gas station of the future, meeting the ever increasing needs of car charging stations. This is especially true of areas highly dense with car traffic, where vertical stations would be most efficient.

Ennead architects’ design is still in proposal stages, but it demonstrates a promising future for electric charging stations.