We’ve been waiting on drones to take over last-mile delivery for some time now. It was almost a decade ago that Jeff Bezos first publicly talked about Amazon launching a drone delivery service. It took until August 2020 for them to get FAA approval, but things are finally happening. Before the air above us becomes an expressway for packages, though, there are a lot of details to sort out. That’s a big reason why Amazon’s FAA approval took so long in the first. Sending drones up over heads by the dozens, or even hundreds, is a complex undertaking. 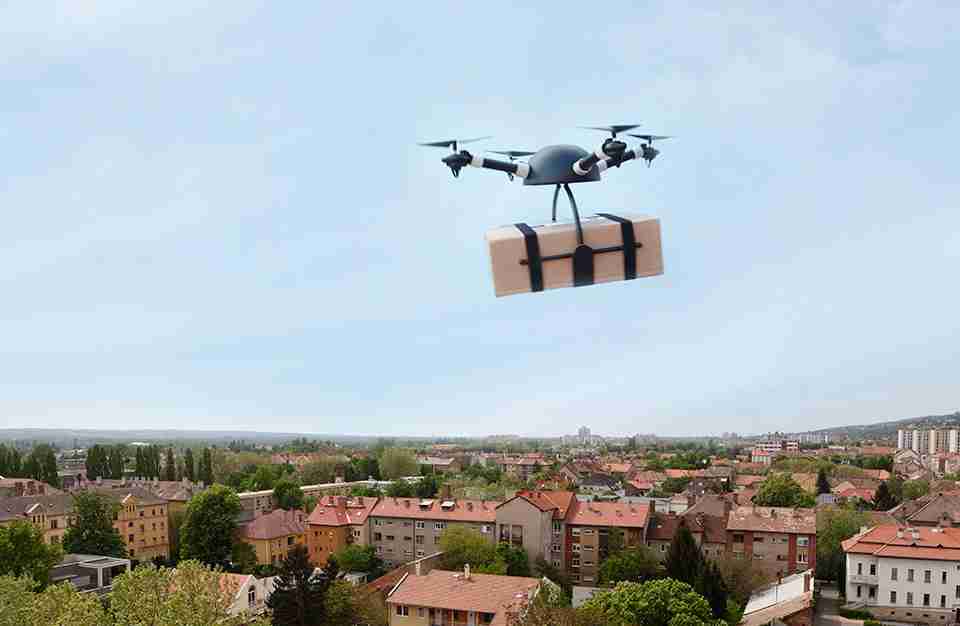 First things first, Amazon will be deploying delivery drones in a couple of American cities this year. Over the summer, the company announced it will start drone delivery in Lockeford, Calif., an unincorporated community of about 3,500 people south of Sacramento. It sure seems likely that the project will be a small-scale launch to test out the technology, especially collision avoidance.

“It can also detect moving objects on the horizon, like other aircraft, even when it’s hard for people to see them,” Amazon said. “If obstacles are identified, our drone will automatically change course to safely avoid them.”

About a month later, though, Amazon announced it would begin Prime Air drone delivery this year in College Station, Texas, home to Texas A&M University and a population over 115,000. This is decidedly a step up in terms of taking the project mainstream, signaling confidence in the technology.

“The package delivery operations in College Station will not be experimental operations,” Amazon spokesperson Av Zammit said in a statement. “Instead, they will be conducted under an air carrier certificate issued by the FAA that enables commercial deliveries and shows that our comprehensive processes meet the FAA’s high safety bar.”

Amazon will join rivals Walmart and Alphabet in the drone delivery game. Walmart already uses drones to deliver in select locations near its Arkansas headquarters and in North Carolina. It’s partnering with DroneUp to offer drone delivery to 4 million households in Arizona, Arkansas, Florida, Texas, Utah, and Virginia. The service will be available between the hours of 8 a.m. and 8 p.m. and promises to deliver up to 10 pounds worth of items in 30 minutes or less. Through its subsidiary Wing, Google parent company alphabet launched in Australia in 2019 before setting up shop in Christiansburg, Va., a town of less than 25,000 people delivering mostly coffee, Girl Scout cookies, and items from Walgreens.

All right, so the age of drone delivery is upon us. In no time, it’ll be in my city and my morning coffee and bagel will just be plopped on my doorstep by a friendly flying robot, right? Well, not so fast. Yes, the commercial drone services market is projected to be worth half a trillion dollars by 2028. But there’s a lot to figure out before then.

We can’t just have drones flying around willy-nilly above our heads. They need flight paths through established routes with air traffic control, and they need safety testing galore. Among the things Wing has tested in Christiansburg are how fast a drone must be going for it to smash through the wall of a building, the windshield of a car, and the skin of a person (they use dummies). The Class G (under 400 feet) airspace in cities where drone delivery will operate is densely packed with buildings, birds, and other drones.

“Now you’re getting into more of public perception,” NASA aviation technologist Joey Rios told Bloomberg. “You know, ‘There’s drones flying over my head.’ How do you begin to assure the system and the vehicles themselves such that folks can have confidence that it’s going to be safe?”

NASA and the FAA have spent years working with aviation companies, delivery companies, and public safety officials running trials to ensure that drones can safely deliver in cities without hitting anything, even if they lose internet connection or power, in all kinds of weather. It’s a monumental task, and with people underneath a potential falling package or drone, safety is paramount.

While drone delivery promises decarbonization and decongestion of roads, it’s transferring that congestion to another level. With the potential for air taxis operating concurrently, one level up at between 400 and 5,000 feet, the sky will get crowded in a hurry.

Widespread drone delivery in urban cores may still take a while, then, while the kinks are worked out. But in less densely populated places, it’s already making a world of difference. Wing’s been operating in Australia and Finland for three years now. The UAE is close to launching a drone network to deliver medical supplies, with delivery service Barq EV setting a Guinness world record with a nonstop drone flight of more than 11 miles. The U.K. has approved the creation of a 165-mile drone “superhighway” connecting several cities and towns between London and Birmingham.

“The capability we are deploying and proving through Skyway can revolutionize the way we transport goods and travel in a way not experienced since the advent of the railways in the 18th century – the last ‘transport revolution,’” said Richard Parker, CEO of Altitude Angel, which will provide air traffic control. The “technology we are building here is transformative – it is the basis of Skyway and the only scalable, viable mechanism to start integration of drones into our everyday lives, safely and fairly, ensuring that airspace can remain open, and crewed and uncrewed aviation from any party can safely coexist. Skyway gives us not just the opportunity to ‘level up’ access to green transportation across Britain, but we can benefit first and export it globally.”

In parts of Africa where overland travel can take days or weeks, companies such as Zipline and Swoop Aero are delivering vital medicines and medical equipment to rural areas in a matter of hours.

That’s certainly a better use of drone delivery capabilities, but it is exciting to think of the day when drones can do that anywhere and everywhere.