View This Article in BOSS Magazine
There’s a strong chance that the soups, sauces, sides, and sometimes even the protein menu items you order in restaurants were not made on premises by the restaurant. Many chains go to brands willing to custom manufacture food options, without putting their own names on the product. 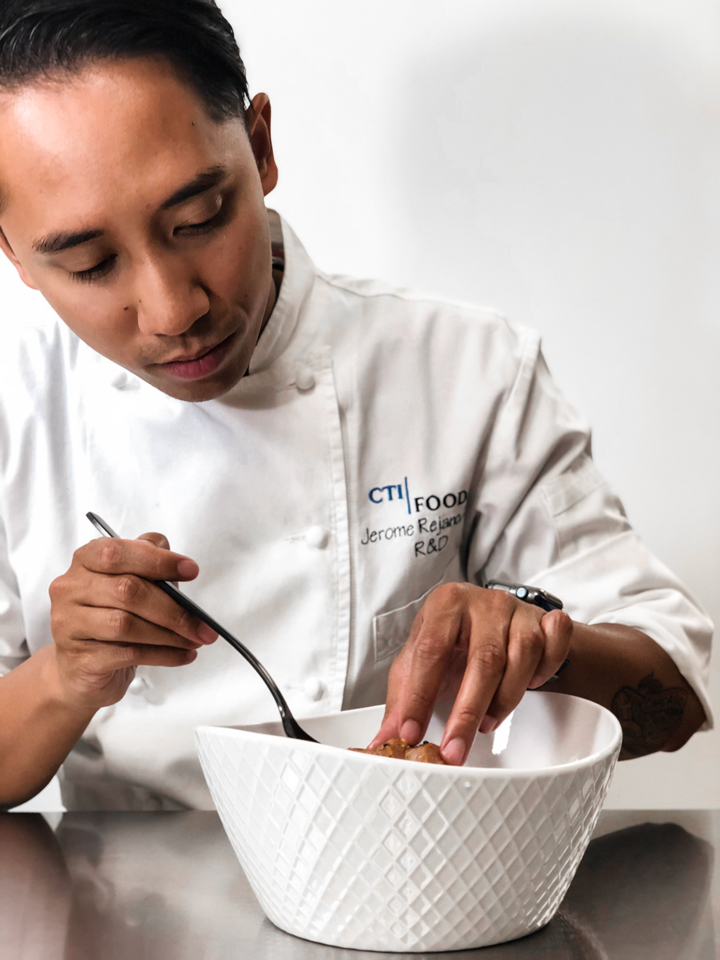 “We’re competing against some of the big companies in this space,” said Jerome Rejano, Director of Culinary and Innovation at CTI Foods. “We have the entrepreneurial spirit to do so. CTI is quick to market and willing to adapt to our customers’ needs—that’s how we’ve reached over $1.3 billion in sales.”

CTI Foods is the brand you work with when you want to create a menu that sets your company apart. The company, which has been in business for over a decade, makes protein, soups and sides, salad dressings, and dehydrated bean options for quick service restaurants and chains around the U.S.

“There’s no off-the-shelf CTI option,” Rejano said. “It’s all created specifically with the customers’ needs in mind so we can deliver what the end consumer wants.”

Rejano has had food in his heart since a young age. His mom, a night nurse during his childhood, often left instructions for her children to prep food while she was at work. This is how Rejano learned basic cooking techniques, and what drove him to apply to culinary school when the time came.

Although it’s not a career path his mom originally wanted him to pursue, he poured his soul into learning and working in the food industry. He claimed to have been an average student at his school, Rejano won the San Pellegrino Almost Famous Chef Competition – North Central Region while he was attending.

“I invited my family to come to the competition,” he shared. “It was the first time they really saw me in my element. After I was announced the winner I saw my mom with tears running down her face saying ‘that’s my son’. She told me then that she finally understood my passion.”

Working in the fine dining restaurant business during and after his education, however, was not a long-term career solution for him. He wanted to have a career in the industry, but also wanted nights and weekends to himself, and the ability to have a family in the future. That’s when CTI stepped in.

“CTI is culinary driven. I found out about the brand from a friend of a friend who was in R&D at CTI, and everything about the company pulled me in.”

His classical training was very expensive, and yet he found himself pretty much throwing it out on the first day on the job. The large-scale manufacturing of food is very different from a prep kitchen, after all, and he had to go from cooking 100 steaks a night to figuring out the right recipe for a 5,000-pound batch of steak at CTI.

“I have a base knowledge of how to cook all food,” he said. “You take the refinement off, and it’s all just cooking. That baseline of training has helped me adapt to this large-scale model. It’s not a term I can claim, but we’re culinary chameleons here, and no two days are alike in this job.” 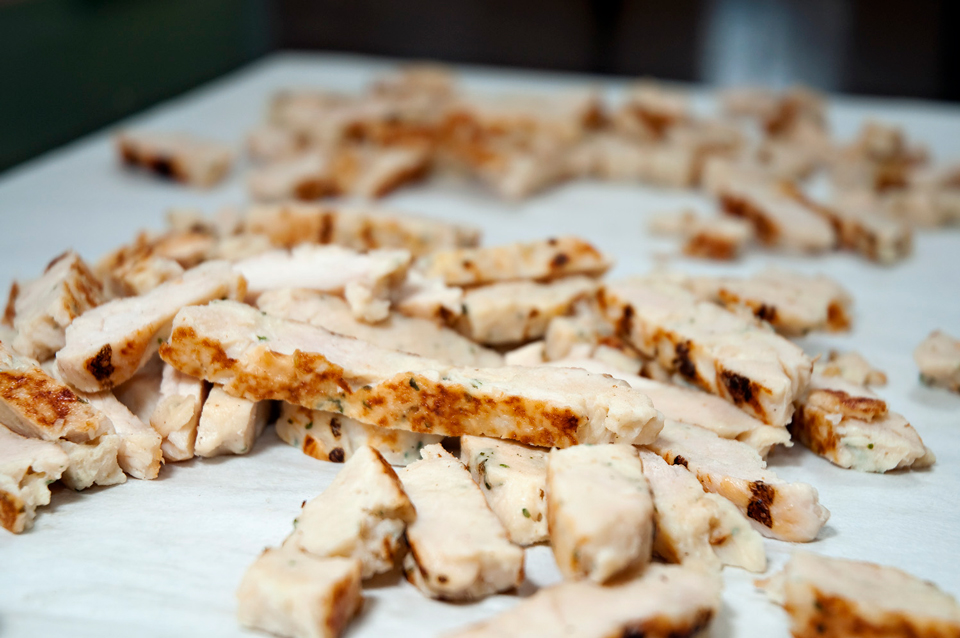 Rejano’s title might read Director of Culinary and Innovation, but there’s a good chance you’ll still find him in the kitchen, elbow deep in the next culinary innovation.

“It’s normal for me to be in the kitchen or working with production operators to make sure everything is running smoothly. It’s also not unheard of if I have to drive to a customer’s site for meetings or to take a conference call. We’re flexible, nimble, and we have a lot of talent here.”

He shared that CTI embraces its employees and their niche skill sets, not hiring cookie cutter employees with similar skills but a diverse range of people.

“It’s a very well rounded, balanced team in R&D. I get to work with food scientists who know food from a different perspective than me,” he said. “And to cap that off, I’ve worked towards my Certified Research Chef (CRC®) certification, something that only 100 or so chefs in the world have. That just speaks to the level of talent we offer our customers.”

A unique aspect of CTI Foods’ culture and strategy for success is its team approach to selling and attracting customers. While some customers prefer to work with a sales team, others favor working directly with the R&D team. CTI Foods responds to each customers’ needs and wants to deliver the right solution.

The company’s approach to R&D doesn’t hurt, either. Rejano is committed to staying on top of industry trends, and does so with several different sources of data, via food shows, conferences, and eating.

“Food is never really, really new. Customers’ tastes and expectations change and we need to adapt,” he said. “What is different in the U.S. is how consumers have opened up to international flavors, expect cleaner ingredient lines, and have become more adventurous in their eating habits.” 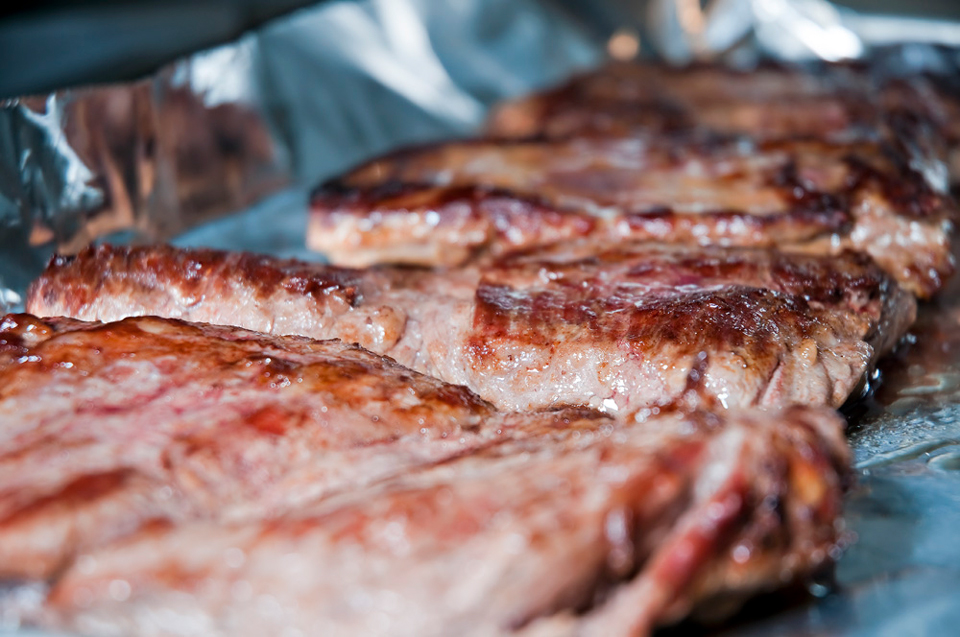 CTI Foods is in the GAME of elevating everything from flavor profiles to customer experience. The company is now elevating its sustainability game.

Its sustainability committee will track its environment, health, and safety policies, identifying areas of improvement and opportunity. Rejano shared that over the last few years CTI Foods has done everything from developing a supplier code of conduct and creating an internal opportunity for charitable food donations to focusing on reducing gas emissions, and energy and water consumption.

Steps like these mean that CTI Foods has a great chance of continuing its legacy of longevity. With a chef like Rejano at the helm of R&D, and a master plan aimed at delivering not just what the customer needs, but what the consumer wants, CTI Foods is destined to continue to improve upon its success.

Developing distinction through flavor and menu innovation.  Creating a palatable difference that sets your brand above and apart. At CTI Foods, no two products we create are ever alike. Whether we match or reformulate items you currently menu or develop something exciting and new, CTI Foods partners with you to create custom, proprietary products that help you capitalize on growing trends and captivate your customers.

For over a decade, we’ve worked with the industry’s leading restaurant companies providing a competitive edge through our customized menu creations. CTI has seven manufacturing plants around the U.S., many of them with 25 years or more of customer manufacturing experience before being acquired by CTI. From beef, chicken and other proteins, to soups, sauces, dehydrated beans and much more, we can do the same for you. 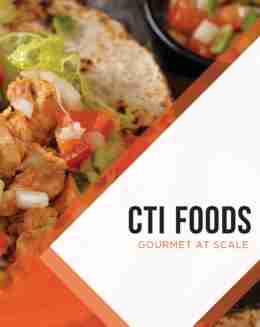 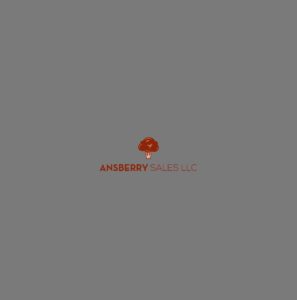