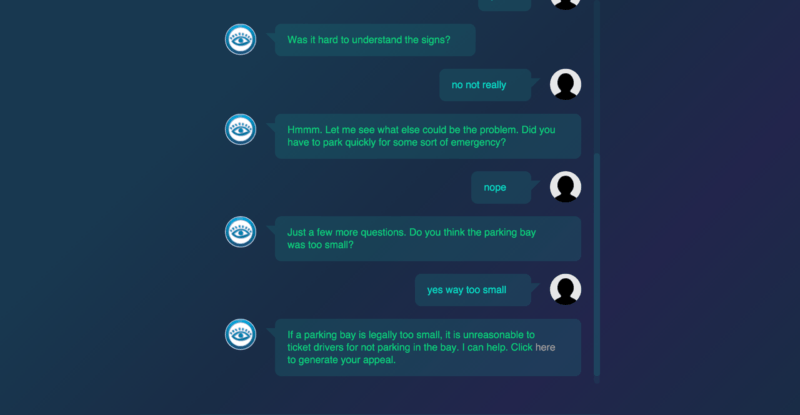 First, it was parking tickets. Now robot lawyers have moved on to offering free legal aid.

A new user-friendly chat interface on Facebook Messenger, called DoNotPay, can assist refugees with completing immigration applications in the UK, U.S., and Canada.

Joshua Browder has been dubbed the ‘Robin Hood of the internet’ in his fight for consumer and human rights. He was a mere 19 years of age when he first built his altruistic bot.

Why Facebook Messenger?
“It works with almost every device, making it accessible to over a billion people. Ideally I would love to expand to WhatsApp when their platform opens up, particularly because it’s popular internationally,” Browder explained.

Messenger lacks end-to-end encryption, but he keeps everything encrypted between Facebook and his server.

It always brightens my day to receive these emails. I wish the local governments would just follow the rules pic.twitter.com/1gz6NjYSs3

The Original Concept
The 20-year-old Stanford University student has already helped to overturn over 200,000 parking tickets in London, Seattle, and New York with his bot. DoNotPay’s success rate was at 60 percent in January and it added more cities to its repertoire. Congestion capitals: San Francisco, Chicago, Denver, and Los Angeles.

NPR reported that in Los Angeles alone, about 40 percent of challenged citations are dismissed. Not only is this providing beneficial legal aid for motorists, but there’s a silver lining for parking operations staff.

“Our staff spend a great deal of time reviewing letters from motorists in trying to decipher what they’re actually contesting. If this process will help the motorists really focus in on why they’re contesting their parking citation, it would also help our staff in reviewing the contested parking citation,” shared City of Los Angeles Parking Operations Chief Wayne Garcia.

“I feel like there’s a gold mine of opportunities because so many services and information could be automated using AI, and bots are a perfect way to do that, and it’s disappointing at the moment that it’s mainly used for commerce transactions by ordering flowers and pizzas.” – Joshua Browder


Immigration Benefits
Browder’s work has always had a meaningful mission. Simplifying parking ticket disputes has only helped advance his cause of demystifying complicated legal language.

“As an immigration attorney, I can see the major benefits that leveraging sophisticated chatbot technology will have in the asylum application process. It will be easier for applicants to submit their applications and it will empower legal aid organizations to assist a larger numbers of clients,” explained immigration lawyer Sophie Alcorn.

“Asylum seekers want to follow the laws and do everything properly, and this technology will help them do so,” she also noted.

Once logged into Facebook via the DoNotPay website, this prompts a chat screen to appear. By asking, “What other names have you used?” and “Have you, your family, or colleagues ever experienced harm or threats?” the bot helps users can explore cases and figure out which application is needed.

After providing legal aid, DoNotPay provides specific instructions on completing the application(s) before they get mailed to court.

Since Browder’s DoNotPay bot is based on a conversation algorithm—employing keywords, pronouns, and word order in order to comprehend users’ problems—the more people use the bot, the more intelligent it can become. This algorithm quickly analyzes bulks of information all while simultaneously improving itself.


In order to keep up with recent immigration policy changes, Browder has developed his latest version of the bot with help from immigration lawyers in the UK, U.S., and Canada.

Though beginning his project before President Trump’s election, Business Insider reported that he feels the bot has now taken on new significance, given the administration’s recent initiatives to immigration. 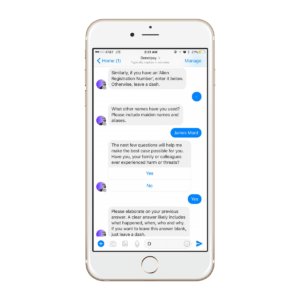 What it Means for Business?
Does your business employ immigrants? As Forbes’ Gene Marks pointed out, this is a pretty good service for your employees who are in need inexpensive help with immigration paperwork.

Marks called DoNotPay “another example of artificial intelligence technology that’s automating process and creating new opportunities—which may have an impact on your future business… the fewer lawyers involved, the better.”

While Browder’s chatbot lawyer isn’t exactly revolutionary—it’s preceded by Ross, IBM Watson’s robot lawyer and an AI lawyer that reviewed human rights cases in Europe—his service boasts a new, clean interface for most anyone with access to the internet and Facebook to use.

The DoNotPay bot beautifully illustrates the potential improvements AI can lend to our lives.

Browder also has begun work on an bot to clarify legal rights for those living with HIV and another collecting compensation for people whose flights were delayed for more than four hours.