Our global population is set to hit 9.7 billion people by 2050, and the demand for increased reliance on alternative resources is critical. Clean technology...

Our global population is set to hit 9.7 billion people by 2050, and the demand for increased reliance on alternative resources is critical. Clean technology solutions are shaping how our world’s community will count on the renewable energy of tomorrow.

Cleantech is currently cleaning house when it comes to improving efficiency, too.

“Wind turbines have developed greatly in recent decades, solar photovoltaic technology is much more efficient, and there are improved prospects of harnessing tides and waves,” said The World Nuclear Association.

“Solar thermal technologies in particular (with some heat storage) have great potential in sunny climates. With government encouragement to [utilize] wind and solar technologies, their costs have come down and are now in the same league as the increased costs of fossil fuel technologies due to likely carbon emission charges on electricity generation from them.”

As traditional power is eclipsed by cost competitive wind and solar power generation, clean tech is focusing its attention on the looming problem of efficient energy storage solutions. 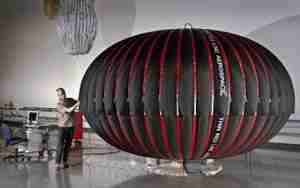 Intermittency in the Limelight
Where advances in wind and solar power efficiency only continue to reach new heights, it is the issue of keeping the lights on during off-peak hours that remains a huge obstacle in cleantech. As the sun sets and when winds lull, folks often have to revert back to using fossil fuels.

When wind and sunshine relent, storage steps in. It’s a key ingredient to on-demand renewable energy.

According to Energy Storage Association, Compressed Air Energy Storage—also known as CAES—plants are very similar to pumped-hydropower plants in terms of their applications, output, and storage capacity. However, rather than pumping water from a lower to upper pond when there is excess power, a CAES plant will compress and store ambient air under pressure in an underground “cavern”. Pressurized air is then heated and expanded in an expansion turbine when electricity is needed, thus driving a generator for power production.

Since the 1970s, there have been multiple internationally compressed air energy storage systems projects, however the same problem always resurfaces: where to put the air?

Steel tanks have been notoriously expensive, while cheaper underground caverns are elusive.

Toronto-based Hydrostor has conceived a low-cost, underwater option. Their subaqueous balloons have the potential to bring CAES near ocean or deep lakes.

As one of several companies pursuing underwater compressed air energy storage, Hydrostor stands out in a couple of ways.

Despite Thin Red Line Aerospace’s “Energy Bags” hopeful results from its pilot program off the Scottish Orkney islands in 2011 and 2012, a major obstacle has been in their way.

“The challenge is a step to grid scale,” mentioned Founder and President of Thin Red Line, Max de Jong. So how will the system store enough air to adapt to the demands of our future global population?

Hydrostor’s system has been under development for about five years, incorporating integrative technology from various fields, including its signature “balloons”. These are known as accumulators, made of a urethane-coated nylon—a robust material employed by marine salvagers to haul shipwrecks from lake and seabeds. The balloons will be offered with a 10-year warranty that could be expanded up to 20 years in the near future.

Essentially, the system uses excess solar or wind power to charge an air compressor. Compressed air is cooled, transported through a tube, and shot into the balloons. Due to the underwater depth of the balloon storage, the air inside the balloons compresses. So the further down the balloons are, the higher the capacity for air they hold. 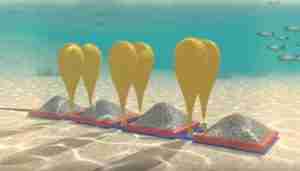 When Hydrostor’s system is ready to release the energy, onshore valves are opened by operators and force the air out to spin a power-generating turbine. Hydrostor balloons only contain a fairly small volume of energy, where generators are capped near one megawatt. To support a large community—and a massive electrical grid—they’re not gonna need a bigger balloon.

They’ll need many, many more balloons.

And after a demonstration in Canada officially launched in November 2015, Hydrostor’s project demonstrated that it could power up to 330 homes with a capacity of 660-kilowatt hours without any emissions or toxic substances, like that of large-scale battery storage.

The balloons were submerged over 180 feet in Lake Ontario and used natural lake water pressure to return compressed air through pipes to charge a turbine. While electricity runs a compressor to produce the compressed air on land, waste heat is captured and has the capability to increase the round-trip efficiency from about 60 percent up to 80 percent.

The two-year pilot project can not only help partner Toronto Hydro extend the life of its distribution equipment in the long-run, but mitigate distribution investments by offering peak electricity.

The company cuts costs by having no need to manufacture anything and uses off-the-shelf technology to pump air into underwater balloons. Paired with drilling techniques that diminish any need for boats or cranes to position the pipes and balloons, Hydrostar really only needs to budget for use of one tugboat.

“We are able to work more like a developer,” said VanWalleghem. “We can make a brisk business doing a few projects a year.”

While the demonstration in Toronto is a 1-megawatt project, Hydrostor wants to offer more sizeable options, including 5-, 10-, and 100-megawatt choices when fully commercialized. For perspective, VanWalleghem pointed out that at 10 megawatts, the cost would be about $250 per kilowatt-hour, making it the cheaper option compared to the full-price costs of any compressed air energy storage on land.

“The G20 is talking about getting off fossil fuel by 2050,” explained VanWalleghem at Hydrostor’s Toronto launch. “To do that, our electricity system has to incorporate storage so we don’t need as much backup diesel and natural gas capacity—that’s what this can do.”

Hydrostor has plenty of homework ahead before its system becomes a reality. With bigger systems come larger issues, and many unknown environmental impacts are yet to be examined. Noise pollution—and we’re not talking about droll hisses from party balloons—could be high-pitched and disruptive.

“Noise could be a huge thing. Imagine you’re forcing a bunch of gas through what I’d imagine is a fairly narrow pipe,” suggests University of Connecticut marine biologist Eric Schultz.

The safety of marine life adjacent to the balloons is a major concern as well. Although, VanWellghem is of the opinion that the underwater compressed air energy storage system could foster marine life, especially since the balloons are covered in stones that could resemble an artificial reef where fish may spawn.

Next up: the cleantech startup has secured a contract with a utility company in Aruba.

And diving deeper with more balloons.