“It’s incredible to be recognized by the DMAs. More importantly I feel it is well deserved for our team, who all have a common goal in ensuring the brand is the best it can be. They deserve all of the credit,” shared Aaron Wells, President. 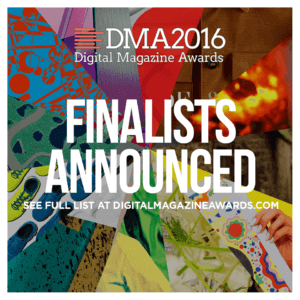 The DMAs has offered the most coveted awards in the international magazine industry since its launch in 2010. Categories highlight unique articles and eye-popping design that focus on creativity, innovation, and commercial success.

Past winners include heavy hitters such as WIRED, The New Yorker, The Economist, British GQ, among many others.

The digital publishing industry’s cream of the crop will be recognized at the end of the year during the Digital Magazine Awards event and the Future of Magazine Media Conference on November 29th in London.

“We’ve always been proud of the product we put forward, but being named a finalist in all five categories entered is great recognition for a team that puts their blood, sweat, and tears into every issue,” said Nick Ledue, CEO.

BOSS Magazine is a finalist in the following categories:

While most of the categories are chosen by Digital Magazine Awards judges, Cover of the Year is awarded based fan votes. 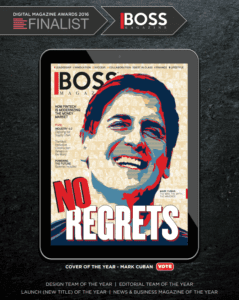 “With a name as big as Mark Cuban appearing on the cover of BOSS Magazine’s August game-changer’s issue, we were faced with a once-in-a-lifetime opportunity to make our design truly stand out,” said Content and Creative Director Nicola Batchelor.

“With so many magazines frequently displaying headshots on their covers, and without the opportunity  to take our own unique and memorable photos, it was important that this big name on the cover was supported with a strong, hand-drawn design that stood out and emulated his dynamic persona.”

“We didn’t originally see the subtle mosaic but now looking at it again on the computer screen, the cover is amazing. Great stuff,” commented Danny Bollinger, Public Relations Agent for Mark Cuban and The Dallas Mavericks. 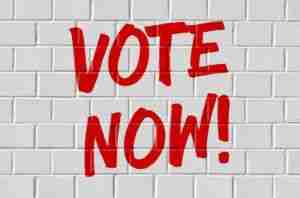 To vote for BOSS Magazine cover as Digital Magazine Awards’ 2016 Cover of the Year, click here.