We Don’t Need Another Hero – Just All the Billionaires

According to a Credit Suisse report from 2017, total global wealth is around $280 trillion. This means that those wading in the top pools of financial largess control over $140 trillion.

Of those who control a vast majority of the wealth in the world there is another significant tier. About 0.00003 percent of the population (or 2,208 total) people are billionaires. That’s one in every 3.4 million people or so — or to put that in perspective an average of:

Even among those who are billionaires there are hierarchies. It turns out that the combined wealth of the nine richest people in the world is more than the 4 billion poorest.  The richest of these are names you have heard:

With the billionaires club in the world being about only the seating capacity of a large Broadway musical, it leads one to wonder what kind of global change they might engender if they all worked together. Conspiracy theories about this very idea have given many to accuse the wealthiest people of meeting up to take over the world. People think about what kinds of power grabs billionaires get into when they gather en masse, but what if they all endeavored on a grand act of philanthropy.

The infographic below from Self Lender poses a few scenarios of how the world’s richest people could alter the course of our nation’s history with some choice giving opportunities. It’s wild to think that large-scale problems in the U.S. like credit card debt or homelessness could relatively easily be eradicated with the stroke of a pen.

This isn’t to say that the wealthiest class doesn’t already participate in some significant philanthropy. Bill Gates has donated over $27 billion (recently $4.6 billion to fight malaria) and Warren Buffett, over $21 billion (with some $3 billion recently going to the Bill and Melinda Gates foundation). But, if some intrepid non-profit executive could get the right rolodex, we could easily see the minimum wage raised to $15 per hour or an entire generation get out of student loan debt.

Below, take a look at how much the richest people in the world could do to help others if they collectively addressed some of the concerns detailed on the next page. 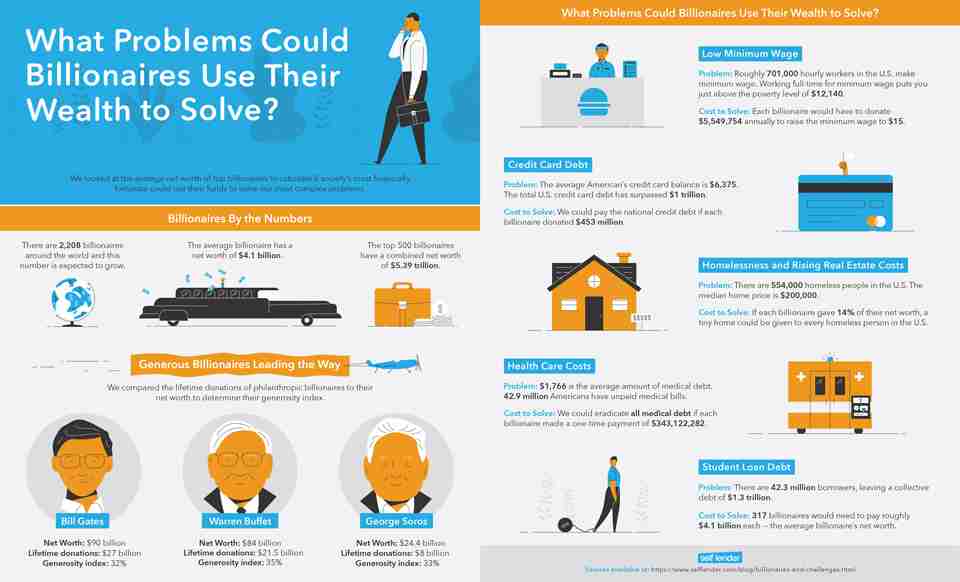