How Long Does it Take Jeff Bezos to Earn Your Salary? Not Very Long….

See how quickly the richest man on the planet can earn your salary. 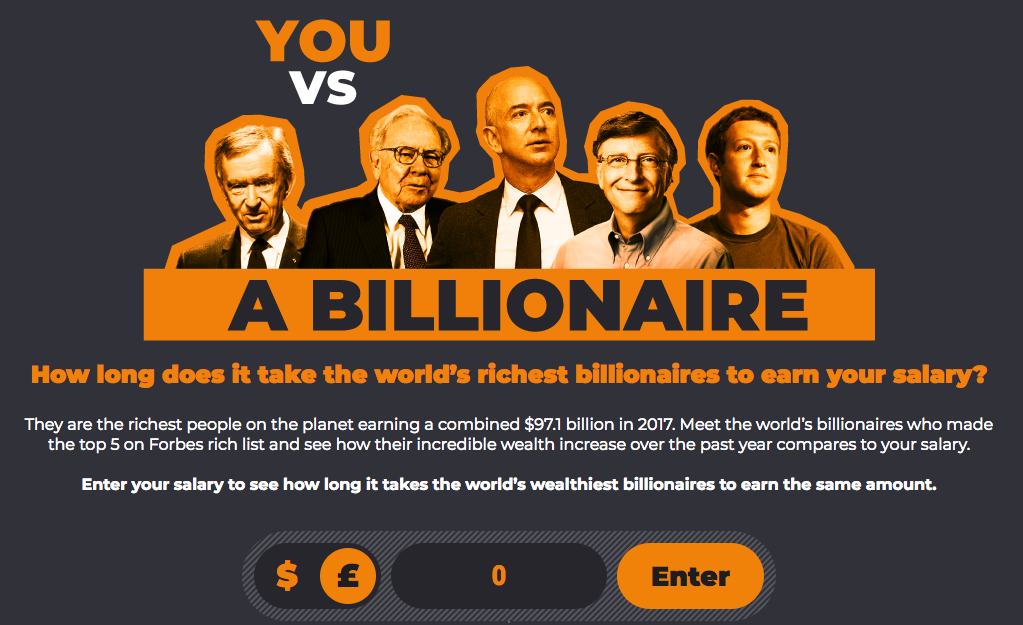 According to Forbes, there are now more billionaires in the world than ever before and with their value at an average of $4.1 billion, it’s safe to say they are comfortable financially. Sure, that’s a lot of money, but it’s the top five wealthiest billionaires who make that amount look like loose change.

The likes of Bezos, Gates, Buffet, Arnault and Zuckerberg make up the top five wealthiest individuals in the world. If you’re still struggling to understand just how much money they have, RS Components have created an interactive tool which allows the user to input their annual salary amount and compare just how quickly one of the billionaires would take to earn it. Answer: not very long—take a look at the tool here.

Even if you’re in the highest paying sector in the UK you’re likely to earn, at a maximum, £290,000 annually.  Jeff Bezos, on the other hand, can make that amount in just five minutes and seven seconds.

Most Brits, on average, earn £27,600 per year, although the likes of Bernard Arnault and Jeff Bezos, earn that in less than five minutes—imagine what they could buy. Most Brits buy a house, car, and go on two or more holidays a year with that money, so the billionaires must be able to live even better, right?

Even in the U.S.—where most of the billionaires are based—the highest paying salary is about $296,000 annually. Someone like Bill Gates only needs to watch the clock for 35 minutes before his bank balance increases by that astronomical amount!

In comparison,  Jeff Bezos can earn the average U.S. annual salary in just 46 seconds, which helps us put into perspective just how much he is worth—$78 billion!

So, how does your salary compare to some of the wealthiest billionaires in the world then?

Note to reader: numbers and statistics are based on information available at the time this piece was written and are subject to change as Jeff Bezos’ earnings are on the rise.