Beast of the BMX Track

Female athletes like Serena Williams, Danica Patrick, and Ronda Rousey are solidly on the map—recognized for their skills on the court, race track, and in...

Female athletes like Serena Williams, Danica Patrick, and Ronda Rousey are solidly on the map—recognized for their skills on the court, race track, and in the octagon. But no matter how hard these women have worked, they and other female athletes still have to deal with rampant sexism.

For what seemed like the hundredth time, Williams had to answer for a male CEO’s sexist remarks following the BNP Paribas in March. The U.S. Women’s Soccer team just filed a complaint with the Equal Employment Opportunity Commission alleging discrimination: the men’s soccer team was paid more in 2015 even though the women’s team generated higher revenues. 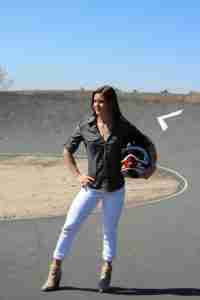 It doesn’t end there. Female athletes not only have to deal with issues like these, but also offhand comments made about their physique, often on the grounds that their muscular build isn’t feminine enough.

Just like those of us in the business world, these women recognize that they often have to put in twice as much effort to get half as much recognition as their male counterparts.

This is something Alise Post understands all too well. As a professional BMX racer, she’s been told to race “like the boys” since she started on the track at six years old. In the gym for workouts, she’s often asked if she needs help with the equipment or advice on her training program. Where most sponsors have three spots for men’s BMX competitors, there’s only one for women. There’s less room on the women’s Olympic BMX team for talent, and she spends an incredible amount of time self-promoting through social media.

But like any professional athlete, these things don’t get her down.

“I love surprising people. A lot of the time, once they find out what I do, I gain respect from outsiders who can’t believe this short girl can do this sport.”

In the spirit of full disclosure, Alise and I have been friends for about five years. I’ve watched her succeed both professionally and personally, and I’ve watched her take terrible tumbles and incur injury after injury. But the heart and mind of an athlete like Post does not accept defeat. And you can believe me when I say the crazy amount of passion and confidence that rolls off of this woman, both on and off the track, is the real deal.

Post has always been athletically driven and an adrenaline junkie, but like many young girls, she got her start in gymnastics. Her much older brothers wanted to do something fun with their litter sister though, and thought BMX would help toughen her up a bit. 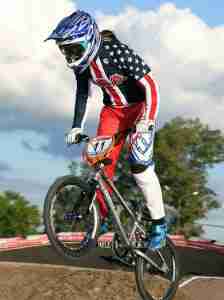 After a hiccup at the first race she participated in—where she was too nervous to leave the start gate—Post quickly moved up the ranks. By 9 she was traveling nationally to compete; her first pro year was at the tender age of 15, where she won a Golden Crank for Rookie of the Year. She was the first woman to do so, and the youngest competitor, male or female to reach pro.

With another Golden Crank for Pro of the Year, six consecutive BMX national titles, and one trip to the Olympics already under her belt, the moniker “Alise the Beast” fits the woman who flies over competitors on the track.

But there was little to no money in BMX when she started competing, on the men’s or women’s side. It was not an Olympic sport until the 2008 games, and Post was too young to participate. But when the international stage of BMX started calling, she quit gymnastics to focus full-time on barreling down the start gate, flying over towering jumps, and finishing the race in around 30 seconds, all while having several other competitors breathing down her neck.

“I’ve been lucky enough to go from participating in this sport for fun to turning it into my full-time job. It’s a really exciting time to be part of BMX—the women now have the opportunity to lay the stepping stones for future generations of women BMXers to make this a viable career.”

It hasn’t been all luck though: a support system that never told her she couldn’t accomplish these difficult goals, an incredible drive to push her body to the limits, and a sense of community the women of the sport today are responsible for building have all combined to give U.S. BMXers a real platform to encourage change in the sport.

“BMX has grown by leaps and bounds since I started, for both men and women. What holds the women back though is that we just don’t have the same numbers the men see for competitions. 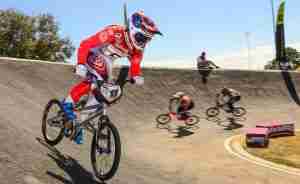 “This is not a big sport, especially not for women, but it is gaining steam. The other female riders and I want to encourage a strong sense of community in BMX—to get enough girls to train together, to support one another—so that we can have more women competing.”

This will open a lot of doors for the women’s side of BMX. With more women to compete, the size of the winnings will increase, as will sponsorship opportunities. Post’s generation of female riders is proof that this works—with some of the contests having equal purse sizes to the men’s—and that the sport is already on the right track.

Post knows that as the sport grows, so will her fame. Her and male U.S. BMX rider Connor Fields were two of the most requested U.S. athletes at a press junket for the upcoming 2016 Rio Olympic Games, a good sign for the future of the sport. Even during our interview at the Olympic Training Center in Chula Vista, California, a small crowd gathered to watch her fiancée Australian BMX star Sam Willoughby practice. Another crowd gathered to watch her as we started her photoshoot. 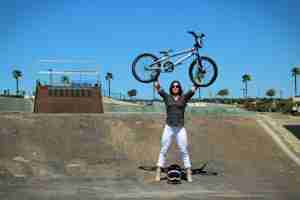 By channeling this attention into clinics for young riders, and meaningful interactions with fans of all ages, Post and her fellow women riders are setting a precedence of excellence for future generations to benefit from.

“I’m very aware of the responsibility I have for BMX and for other women in sports. Women, moreso then men I’d say, have to put in the time, and open themselves to the public.

This is a grassroots movement, and there is a tremendous group of women who are making a splash globally. I’m honored to be among them.”

Young fans, both boys and girls, look up to Post for her prowess on the track. She’s proof—like so many other female athletes of our time—that you don’t have to be “one of boys” to be competitive. Female athletes of today can be strong, fit, and feminine, and still be Beasts.