A mission to democratize assembly automation is just one reason why Calvary Robotics is one of the most exciting companies in the industry.

A mission to democratize assembly automation is just one reason why Calvary Robotics is one of the most exciting companies in the industry.

From powerful incremental advances to bold leaps forward, the innovations pioneered by Calvary Robotics are reinventing industrial assembly automation. Since 1994, the Webster, NY-based systems integrator has led a quiet yet potent revolution in the way manufacturers think about and implement robotics, supported by an agile corporate structure designed to interplay with the seismic shifts that the company’s advancements are causing.

That kind of brilliance defines the most successful niche players in any market; in manufacturing, where assembly automation improvements on the production floor have been historically few and far between, it secures Calvary’s place as a leader throughout its evolution.

While nonindustrial and nonmanufacturing sectors have embraced artificial intelligence, machine learning, robotics, and other technological gains leading the charge towards Industry 4.0, the manufacturing sector’s progress moves at a comparative crawl.

“It’s amazing how slow it is; you go to the same automation robotics shows year after year and there’s almost no changes,” Calvary founder and CEO Mark Chaney remarked to BOSS. “In manufacturing robotics you don’t see much that has cut the cost of manufacturing by more than a couple of percent.

“I don’t think I’ve ever seen any advancement where people cut the cost, the delivery of products, or the performance by more than a few percentage points year after year. But that’s a way for us to innovate in a space that’s not advancing quickly.” 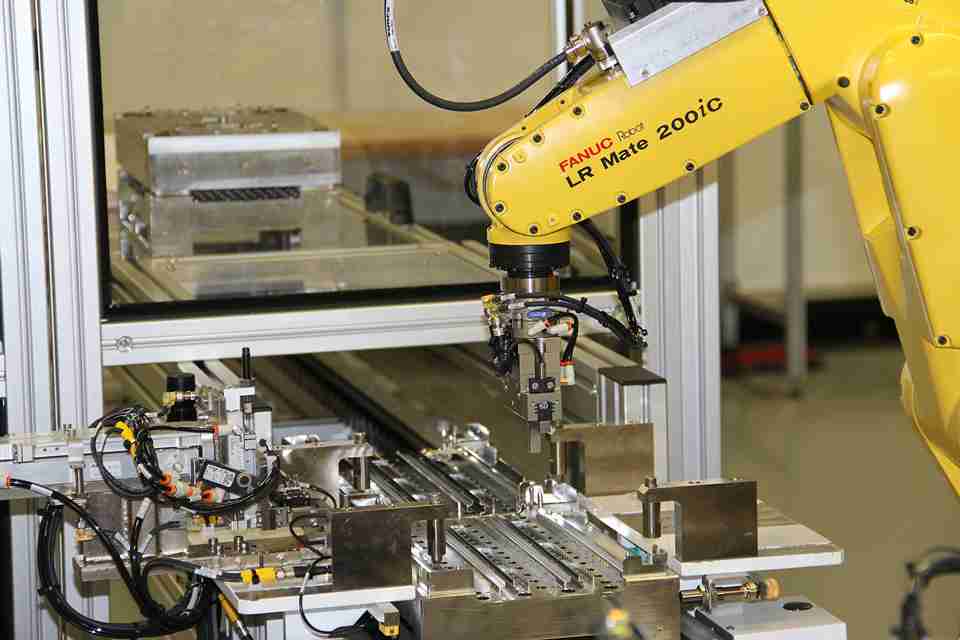 “We’re totally vertically integrated,” Chaney explained. “Not only did we develop that, but we’re one of the few companies that can develop the process, help the product, the prototypes, in-scale production—which is equipment—and full productization of the product itself. These are three different skill sets, and you usually have to go to four or five companies to pull it all together.”

In January of this year, the company launched calvIO, Inc., which is developing a proprietary robotic software system for assembly automation that radically simplifies human-machine interaction in the industrial space. The calvIO mission is to bring the benefits of assembly automation to manufacturers of every size.

As noted on the website, “Our solution will democratize the $20 billion industrial robotics market that is mired in customization, cost, and complexity.”

In keeping with the synergistic nature of the Calvary business model, Calvary Products develops the hardware, and calvIO creates the software for the modular robotic work cells that have the potential to cut deployment and maintenance costs by 50 percent—and expects to garner an impressive 30 percent ROI.

The scalable, flexible calvIO solutions eliminate the need for one of the costliest necessities in robotics: programming. According to Chaney, this cuts the overall cost of implementation in half.

“I’ve never seen anybody do anything in automation that cuts costs by more than 10 percent,” he declared. “And now, you don’t need an expensive, high-end programmer to implement all these robots. It only takes a semi-skilled technician.”

An alliance with Good Automating Manufacturing Practices 5 (GAMP 5) is spurring what is certain to be one of the biggest advancements in biomedical device development and manufacturing. The GAMP guidelines mandate that all equipment and changes to equipment must have their software validated by an outside government source. These protocols can cause significant delays in product release.

The calvIO system’s modularity and scalability eliminates the need for software revalidation, slashing the time it takes to get a medical device to market by six months to a year.

“That’s a big advancement for biomedical,” said Chaney. “For them, that’s more important than the cost of the robot.”

Another major disruption steered by Calvary is taking place in consumer electronics. While some aspects of the manufacturing process are automated, final assembly is typically done by hand. Because product upgrades typically come every 12 to 18 months, the time it takes to design, build, and deploy an assembly automation system for a typical upgrade consumes, on average, 30 to 40 weeks.

Calvary is changing that with exquisitely flexible, agile, and fully redeployable systems that take as little as four weeks to introduce.

Faster Than the Speed of Progress

Calvary Robotics is riding a growth tide, driven in part by its custom assembly automation and test products. A new offering from calvIO, Machine Check, is modernizing robotic machine tending.

Most manufacturers take a “chop shop” approach to machine tending.

“Those companies are really missing out on robotics,” Chaney posited. “The nice thing about what we’re doing here is bringing that product to that market, because if you can build a robotic system that loads, let’s say, a brake press, that system may be very cost effective for long-run production.

“If you’re going to do a chop shop method it takes 600 to 1,000 hours to reprogram that whole system. It takes way too long to program, and is way too costly. Our system will take a matter of hours instead of a month or two, and the cost is less than $1,000 instead of $60K. That’s changing pretty much everything to do with machine tending, loading, and unloading.”

There are many more brilliant niche plays and business model reinventions underway that promise to yield remarkable advances that will benefit Calvary’s core industries, which, in addition to healthcare and electronics include automotive, consumer goods, and energy.

We don’t have the space to delve into them here, but rest assured: the innovations—and the additional industries they are exploring—are diverse, fascinating, and unexpected. We can’t wait to see what they do next.

Calvary Robotics is a world leader in the design and build of automated assembly and test and material handling systems, as well as a predominant integrator of third-party technology and equipment. We are uniquely qualified not only based upon our years of experience but also the synergies that are realized between our complimentary business units. These units offer distinctive expertise but combined strength when addressing and solving customer challenges. This model of operation differentiates Calvary from a competitive standpoint and increases overall program efficiency while reducing risk.

The four business units offer services that include complete system design and build, repetitive manufacturing (BTP) of systems or sub-assemblies, tooling and fabricated component supply, and commercialization of products into the marketplace. Calvary serves many industries with our core markets being Automotive, Healthcare, Consumer Goods, Electronics, and Energy. Our global footprint, process optimization, overall capabilities and performance track record, provide customers with the assurance of a successful program and realization of their expected return on investment.

Calvary is consistently a Rochester Top 100 winner as well as being a Rockwell Automation OEM Partner and RIA Certified Robot Integrator. 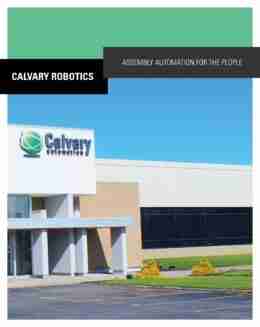