The factory floor hums with the usual sound of work. Parts move down the assembly line, and at each station a worker assembles more until the finished product rolls off the line. The workers finish a consistent number of units every hour. You scan the floor and realize there are no people running the machines. All the workers are robots. It could be 2 a.m. or 2 p.m. It makes no difference because they work around the clock. You’re in a dark factory, so called because it could theoretically run “with the lights out.” There might be a few people performing quality control checks or servicing machines, but the bulk of the work is automated. If it’s the factory of the future, what does that mean for manufacturing and for the human workers in the industry now? 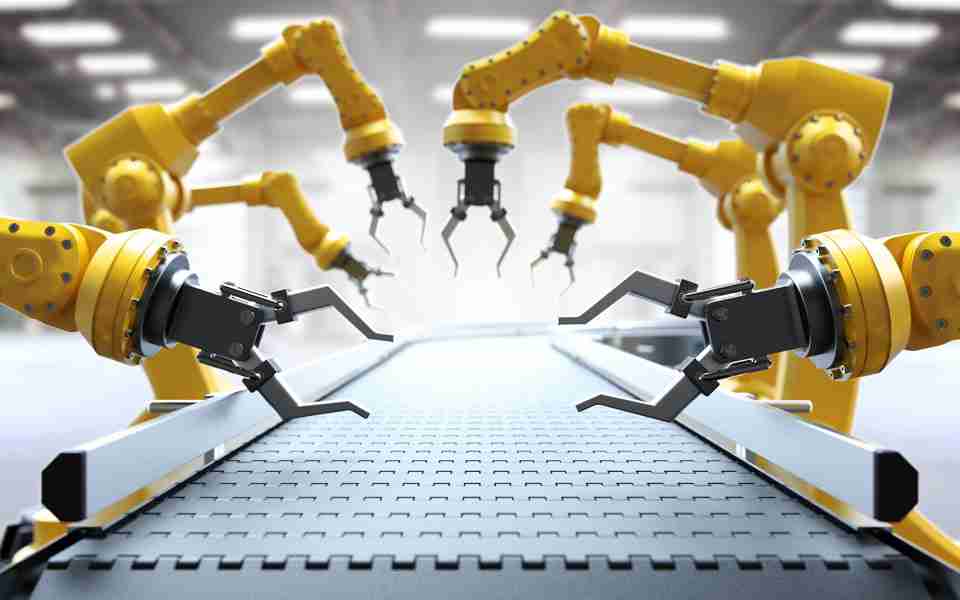 With advancements in automation — AI, machine learning and vision, and the like — dark factory robots could eventually make just about any product. At Japanese manufacturer FANUC, which opened its first lights-out factory in 2001, they mostly make, well, more of themselves. FANUC’s various mostly robot factories make CNC machines, servo motors and amplifiers, lasers, and other robots.

Essentially, the main thing FANUC’s factories make are more factories, with their products exported to places such as China, which orders about a third of the world’s industrial robots and accounts for more than half of FANUC’s sales. In a country that churns out more than a quarter of the world’s manufacturing output, more and more robots are being put on the job.

“Just a few years ago it was unusual to see a small or midsize factory using robots,” Song Wufong, who connects foreigners with SME factories throughout China, told Bloomberg. “Now I see it more and more often as I travel around meeting with factory owners.”

That was five years ago. Demand has only increased with a pandemic and China’s COVID-zero policy making it increasingly difficult to keep factories staffed with human workers open.

“We wanted to implement a future-oriented assembly concept,” Philips’ Sietze Bremer told Assembly in 2012. “With regard to the total investment, we wanted to feel certain that the equipment would still be able to economically produce shavers in 10 years without knowing what future shavers would look like.”

Periodic software updates teach the robots new techniques for new parts, and the products just keep on rolling out. The humans check their work, and that’s that.

Rise of the Machines

The concept of a dark factory has been around for decades, and we’ve seen successful examples. There are obvious benefits: higher, more-efficient output, little to no downtime, lower costs, and safer operations, to name a few. But there are drawbacks, too. Even the most advanced AI really can only extrapolate from things it’s been taught. It can’t adjust as quickly as humans can, and there are certain tasks that require skills that so far only humans have.

Automation technology keeps getting better, closing those gaps with each passing year. How close are we to the dark factory becoming the norm? Tesla tried to automate its Model 3 assembly line several years ago and ended up reverting to a 20th-century-style assembly line, prompting Elon Musk to tweet that, “Humans are underrated.” But his dream of “alien dreadnought” remains alive. Robots do a great deal of work in Amazon’s warehouses. The rise of cobots has transferred plenty of the workload to automation.

Cobots, the fastest-growing robotics segment, are designed to work with people, however. And humans will never be fully removed from manufacturing. It’s inevitable, though, that more factories will go lights-out. That’s already happening to an extent in China, the pace-setter for the world’s manufacturing, and will only continue as a shortage of manufacturing workers make the dark factory a necessary option.

Fearful that automation would put them out of work and out of business, the Luddites smashed machines in England in 1810s, clashing with the British government and even the army on several occasions. Today, the issue is that there aren’t enough skilled manufacturing workers. By 2030, the skills gap could leave more than 2 million manufacturing jobs in the U.S. unfilled. Manufacturers might have little choice but to staff them with robots.

The collaboration might look a bit different than it does in the case of cobots, where robots work with humans side-by-side. There might be a dark factory with robots performing simpler tasks to complement facilities where humans do most of the work. This could save countless lives and limbs that are currently lost in factory accidents.

Putting robots on repetitive, time-consuming tasks will allow humans to do what they do best: think. As a FANUC employee who called himself Mr. Tanaka told Bloomberg, “Any process which can be automated frees the human hands, which in turn frees the human mind.”

The dark factory, then, is not something to be feared, but another tool that will enable humans to work smarter. How enlightening.