U.S. made is the way to go. See why American manufacturing is needed now more than ever.

U.S. made is the way to go. See why American manufacturing is needed now more than ever.

American manufacturing has raked in nearly $6 trillion in the last century. It accounts for 35 percent of the American economy and provides over 12 million manufacturing jobs. Manufacturing also helps sustain support service industries such as transportation.

In recent decades, Americans have grown accustomed to purchasing products made in China, India, and other regions of the world. Unfortunately, the foreigners who produce these products are often forced to work under horrific circumstances, often times as young children. 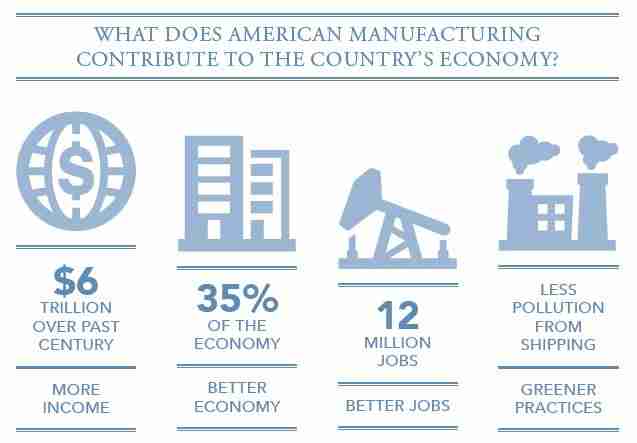 Shipping these goods to America contributes to five percent of the entire Earth’s pollution, a rate that continues to climb each and every year. Outsourcing is also an issue due to the fact that it removes jobs from America, attributing to the unemployment rate.

Each year the American trade deficit widens due to an increase of imported goods and a lack of our own exports. Three percent of America’s wealth and economy is lost overseas on an annual basis. In fact, we have lost approximately $8 trillion in the last 39 years alone, attributing to lower wages, profits, and employment.

Not only do imported goods pose a health threat to foreign workers, but they pose a threat to you as the buyer. There have been multiple cases of radioactive steel, poisonous drywall, and even children’s toys made of harmful chemicals being shipped into the U.S., making it into our homes.

Homegrown manufacturers don’t often have this issue. They follow strict rules and regulations in order to ensure the public’s safety. American manufacturers share your interests and care for the well- being of their consumers.