Kicking off the event were senior-level panels of DoD and federal agency representatives, program managers, and defense industry executives who outlined the issues that they believed were relevant and discussed ways to improve the DoD acquisition even further.

The keynote address was delivered by Mr. Stephen Welby, Deputy Assistant Secretary of Defense, Systems Engineering, and currently performing the duties of the Assistant Secretary of Defense for Research and Engineering. He outlined some of the top-level challenges facing the Department of Defense and Federal Agencies and what the Department is doing to meet these challenges. Welby noted that the DoD has 113,796 professional scientists and engineers, all of whom are focused on technology development and innovation.

“…We are taking steps to be more open, rebuild bridges, and renew trust between the Pentagon and the tech community…”

This underscores the reason why so many industry and government defense engineers gathered together at the conference to dialog and interact and help build a better defense community.

A luncheon address was delivered by Dr. C. David Brown, Deputy Assistant Secretary of Defense for Developmental Test & Evaluation, who highlighted the need for closer cooperation between industry and defense in this important area to help achieve more effective weapon and information systems for the DoD.

The Group Award was presented to a Raytheon Integrated Defense Systems team, the Air and Missile Defense Radar Systems Engineering Team, for their efforts in reducing cost and increasing performance in this important product area.

The Individual award was presented to Mr. Steven Henry, former Chair of the Systems Engineering Division, and formerly of Northrop Grumman and now at the Defense Acquisition University for his outstanding leadership in the systems engineering arena. 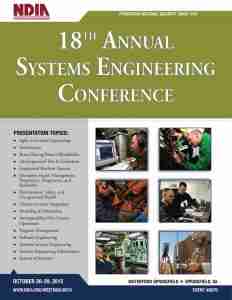 The Importance of the Conference

This conference has been the principal event wherein the DoD and federal agency senior engineering leadership have been able to openly dialog with their industry counterparts and dates back to the first instantiation of a designated Systems Engineering lead within the Pentagon, almost 20 years ago.

With the recent push from the office of the Deputy Secretary of Defense for Acquisition, Technology and Logistics, Hon Frank Kendall, that conferences are a very important means to have such open dialog, this annual Systems Engineering Conference has once again demonstrated the effectiveness of such government/military/industry interaction.

The 19th Annual Systems Engineering Conference is being planned for late October 2016 in the Washington DC area, and the Call for Papers will be announced shortly.